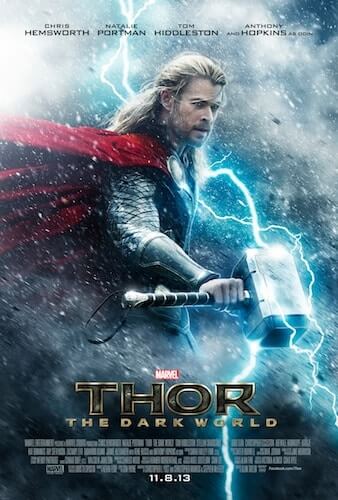 I know I’m a bit crazy about super heroes right now. I think anyone in my shoes would be!

I’ve been prepping for my upcoming trip to LA for the Iron Man 3 premiere. One thing I’ve been doing is watching all the Disney/Marvel movies that lead up to The Avengers, so I watched Thor for the first time last weekend.

Out of all the Marvel movies, I was the most concerned about liking and enjoying Thor. It’s always just looked a bit too far into the “Fantasy” genre for my movie taste. Without turning this post into a whole review of Thor (2 years too late!) I totally admitted to my husband that I seriously loved the film and I could. not. believe. how fantastic it was!

Now, I’m extra-excited because I just got a press release from Disney announcing that Thor: The Dark World will be released on November 8th, 2013!

After seeing the amazing movie poster I shared above, I watched the new Thor trailer that’s exclusively on iTunes. Go watch it now! It’s quite good and it will only make you want to see the Thor sequel today.

Also–if you’ve been obsessed with Marvel and all the superheroes from The Avengers, be sure to take note that the Captain America sequel has also been announced!

Marvel’s Thor: The Dark World continues the big-screen adventures of Thor, the Mighty Avenger, as he battles to save Earth and all the Nine Realms from a shadowy enemy that predates the universe itself.

In the aftermath of Marvel’s Thor and Marvel’s The Avengers, Thor fights to restore order across the cosmos…but an ancient race led by the vengeful Malekith returns to plunge the universe back into darkness.

Faced with an enemy that even Odin and Asgard cannot withstand, Thor must embark on his most perilous and personal journey yet, one that will reunite him with Jane Foster and force him to sacrifice everything to save us all.