↑
Home » Ask the Readers » Let’s Talk About Families: How & When Is Your Family Complete? 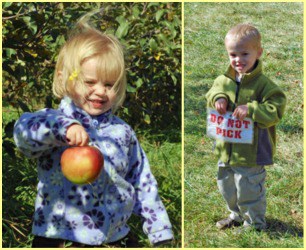 When I was dating my now-husband, James, I would get so irritated when near-strangers asked me when we were going to get married. When I complained to a friend, she said,

Isn't that the truth?

There was a short time in my late teens to early 20's when I thought I didn't want any kids. I was full of career plans and financial goals, and I hadn't dated anyone who was even close to procreation material.

As I continued to grow up, my sister had a baby, then another, and more until her family was complete with 4 amazing kids. I met my husband and knew that we had a future together. Gradually, I realized that my life wouldn't be complete without children.

While some of my friends had nailed down exactly the number of kids they wanted (some right down to gender and hair color!), I didn't have any plans for how many kids would be “just right” for my husband and me. James had suggested two kids in our early days of marriage, and that seemed good to me!

When the time came, we didn't have a schedule or a plan, we just decided one day to try to start a family. I was pregnant within the week! The pregnancy progressed easily, and I came to the conclusion that I'd like our kids close in age. To my surprise, James was completely on board and we decided that, if everything went well with #1, #2 would be right behind him.

Haiden was close to a perfect baby, and Piper was on her way three months after he was born. The second pregnancy flew by. Before we knew it, had two babies born 12 months and 5 days apart!

Having “2 under 2” was so much easier than I ever thought it would be. Piper was incredibly content, just wanting to be swaddled and held for much of her early months. I found that I was doing everything with Haiden, I was just holding a baby while I was doing it.

As Haiden and Piper have grown, we've gone through easy and more trying periods. Those times have made me think either, We should have another baby! or Our family is big enough. Either way, our family will always be perfect to me.

My husband feels the same way I do, so we're not making any permanent decisions about family planning at this point in our lives! It does make me think, how will we make that decision? When will it happen?

I'm curious to know: How and when do you decide your family is complete? Join the conversation and be entered to WIN the designer handbag of your choice (Up to a $500 value) from Essure!

This is a sponsored conversation written by me on behalf of Essure. The opinions and text are all mine. Official Contest Rules.