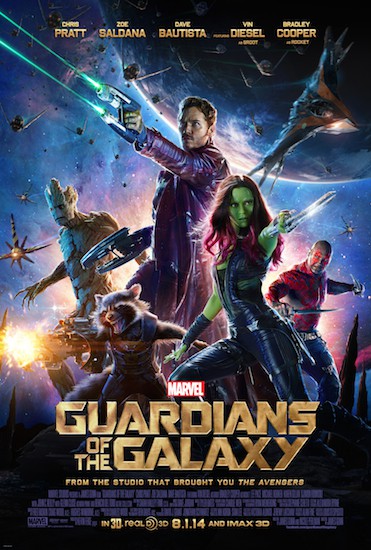 When I was in Los Angeles for a Disney blogging trip last week I had a sneak peek at some sizzle reels for upcoming Disney films, and they all look fantastic! Sadly, I didn’t get to see any of them in their entirety, but seeing the extra-long trailers definitely got me excited about these movies:

Of those four movies, I think there’s the most hype about Marvel’s Guardian’s of the Galaxy. No wonder. Disney has knocked every single Marvel film they’ve produced out of the park! After seeing the trailer for Guardians of the Galaxy, I’m sure it will be another hit superhero movie.

Marvel’s “Guardians of the Galaxy” finds space adventurer Peter Quill the object of a bounty hunt after stealing an orb coveted by a treacherous villain, but when Quill discovers the power it holds, he must find a way to rally the quartet of ragtag rivals hot on his trail to save the universe.

The poster shown above is brand new and I’m happy to share it with all of you! I love how diverse the characters are. It definitely obvious that their differences are going to be a key point in the film-and with those actors I’m sure it will be pure entertainment as they figure it out.

Participating cast members include Chris Pratt, Dave Bautista, Karen Gillan, and Director James Gunn. To make it even better, they’ll also screen the exclusive world premiere of the  Marvel’s Guardians of the Galaxy trailer at the same time!

The live Q&A and the exclusive trailer screening is only going to be on the Guardians of the Galaxy Facebook page, and if you’re logged in you can even ask your own questions!

Guardians of the Galaxy opens in theaters everywhere on August 1, 2014!

Stay on top of all the Guardians of the Galaxy news by following the film via social media:

Marvel’s “Guardians of the Galaxy” finds space adventurer Peter Quill the object of a bounty hunt after stealing an orb coveted by a treacherous villain, but when Quill discovers the power it holds, he must find a way to rally the quartet of ragtag rivals hot on his trail to save the universe.

From Marvel, the studio that brought you the global blockbuster franchises of Iron Man, Thor, Captain America and The Avengers, comes a new team—the Guardians of the Galaxy.

An action-packed, epic space adventure, Marvel’s “Guardians of the Galaxy” expands the Marvel Cinematic Universe into the cosmos, where brash adventurer Peter Quill finds himself the object of an unrelenting bounty hunt after stealing a mysterious orb coveted by Ronan, a powerful villain with ambitions that threaten the entire universe.

To evade the ever-persistent Ronan, Quill is forced into an uneasy truce with a quartet of disparate misfits—Rocket, a gun-toting raccoon, Groot, a tree-like humanoid, the deadly and enigmatic Gamora and the revenge-driven Drax the Destroyer.

But when Quill discovers the true power of the orb and the menace it poses to the cosmos, he must do his best to rally his ragtag rivals for a last, desperate stand—with the galaxy’s fate in the balance.