↑
Home » Entertainment » Minnesota Giveaway! Win Passes to ONE DIRECTION: WHERE WE ARE Concert film 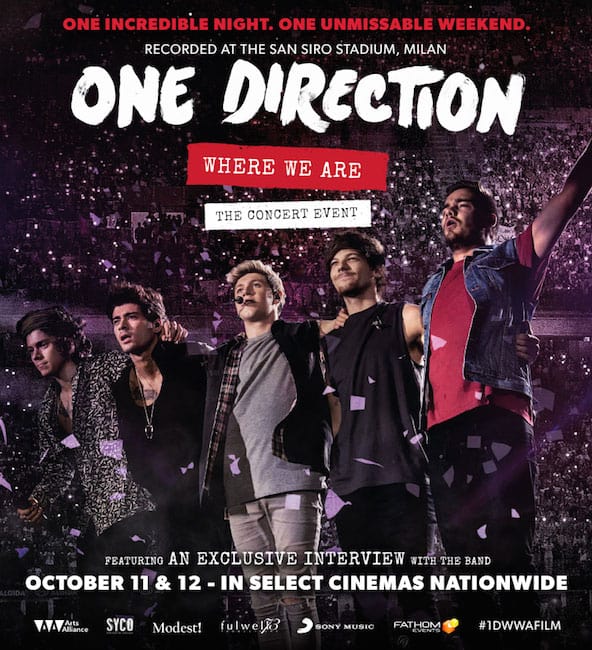 One Direction fans around the world have been anticipating this for months: The epic ONE DIRECTION ‘WHERE WE ARE' The Concert Film in cinemas everywhere only on October 11 and 12 2014!

Showing in movie theaters for just one weekend, followers of the band can join Niall, Zyne, Liam, Harry and Louis for their first-ever One Direction concert experience on the big screen.

About ONE DIRECTION ‘WHERE WE ARE' The Concert Film:

Recorded at Milan's iconic San Siro stadium, experience the concert, featuring all of One Direction's biggest hits. This brand new film also includes a 15 minute never-before-seen interview with the band and exclusive backstage tour footage, all in true high definition and 5:1 surround sound!

Cinema Release: In movie theaters on the 11th and 12th of October 2014. See the One Direction ‘Where We Are' Concert Film site for more information and preorder your tickets right from Fandango.

DVD Release: ONE DIRECTION ‘WHERE WE ARE' The Concert Film will be available on DVD and Blu-Ray on December 1, 2014. Preorder it now!

Run time: 75 minutes of exclusive concert footage + 15 minutes of unseen backstage footage and interviews with members of One Direction.

One Direction fans in Minnesota are in luck! ONE DIRECTION ‘WHERE WE ARE' will be showing on October 11th and 12th at plenty of theaters across the state. Even better, 6 winners will receive either a 2-pack or 4-pack of  tickets to a screening on October 11, 2014! See below for more details.

Want to win tickets to a Minneapolis, Minnesota, area screening of ONE DIRECTION ‘WHERE WE ARE' The Concert Film?

6 winners will receive tickets packages to a October 11, 2014 showing of the One Direction film:

Note: Winners will be notified via email from admin@babysavers.com.  The prize is transferable, but the name of the person receiving the prize must be provided on the same day the email notification is sent.

Please enter the giveaway via the Giveaway Tools widget below. It may take a few seconds to load.

Disclosure: This giveaway was provided by Columbia pictures and/or the associated PR agency.