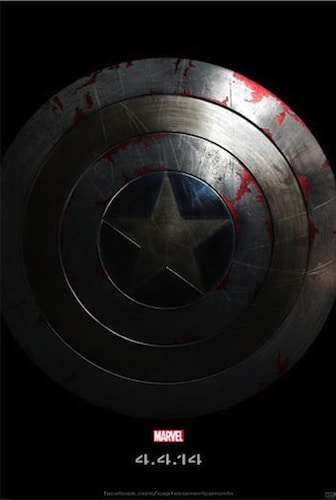 Check out that amazing new movie poster for Captain America: The Winter Soldier. I love the minimalist design, and that shield makes me think nothing but happy superhero thoughts! 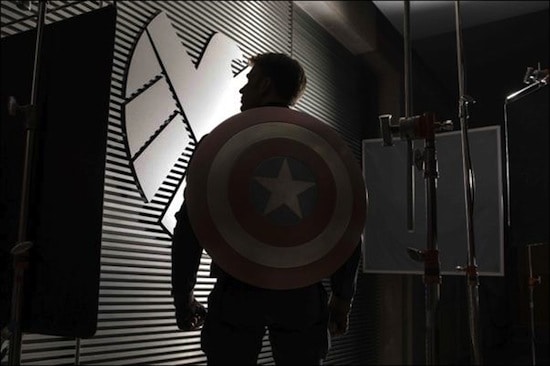 There aren’t too many official details about the film right now, but here’s some information from the last Captain America: The Winter Soldier press release I received:

BURBANK, Calif. (April 8, 2013) – Following in the footsteps of the record-breaking Marvel Studios’ release, “Marvel’s The Avengers,” production on the highly anticipated release, Marvel’s “Captain America: The Winter Soldier” has commenced in Los Angeles, Calif., with production also including locations in Cleveland, Ohio, and Washington D.C.

Directing the film is the team of Anthony and Joe Russo from a screenplay written by Christopher Markus & Stephen McFeely. Marvel’s “Captain America: The Winter Soldier” returns Chris Evans as the iconic Super Hero character Steve Rogers/Captain America, along with Scarlett Johansson as Black Widow and Samuel L. Jackson as Nick Fury. In addition, film icon Robert Redfordhas joined the all-star cast as Agent Alexander Pierce, a senior leader within the S.H.I.E.L.D. organization. “Captain America: The Winter Soldier” is set for release in the U.S. on April 4, 2014.

Captain America: The Winter Soldier will pick-up where Marvel’s The Avengers left off, as Steve Rogers struggles to embrace his role in the modern world and teams up with Natasha Romanoff, aka Black Widow, to battle a powerful yet shadowy enemy in present-day Washington, D.C.

Marvel Studios’ upcoming release schedule includes Thor: The Dark World on November 8, 2013. The studio most recently produced the critically acclaimed Marvel’s The Avengers, which set the all-time, domestic 3-day weekend box office record at $207.4 million. The film, which shattered both domestic and international box office records, is Disney’s highest-grossing global and domestic release of all time and marks the studio’s fifth film to gross more than $1 billion worldwide.

In the summer of 2011, Marvel successfully launched two new franchises with Thor, starring Chris Hemsworth, and Captain America: The First Avenger, starring Chris Evans. Both films opened #1 at the box office and have grossed over $800 million worldwide combined.

In the summer of 2008, Marvel produced the summer blockbuster movies “ron Man and The Incredible Hulk.  Iron Man, in which Robert Downey Jr. originally dons the Super Hero’s powerful armor and stars alongside co-stars Terrence Howard, Jeff Bridges, Shaun Toub and Gwyneth Paltrow, was released May 2, 2008, and was an immediate box office success. Garnering the number one position for two weeks in a row, the film brought in over $100 million in its opening weekend.  On June 13, 2008, Marvel released The Incredible Hulk, marking its second number one opener of that summer.

Keep up with all the Captain America: The Winter Soldier news:

Of course, I’ll also be bringing you all the Disney and Marvel news that shows up in my inbox, so you can just keep checking back here 🙂