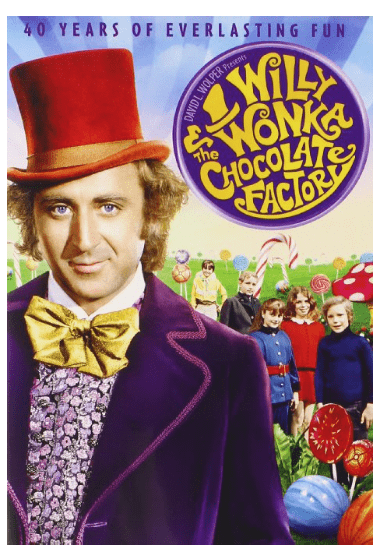 Movie Synopsis: Promoted as a family musical by Paramount Pictures, Willy Wonka and the Chocolate Factory is more of a black comedy, perversely faithful to the spirit of Roald Dahl's original book -Charlie and the Chocolate Factory. Enigmatic candy manufacturer Willy Wonka (Gene Wilder) stages a contest by hiding five golden tickets in five of his scrumptious candy bars. Whoever comes up with these tickets will win a free tour of the Wonka factory, as well as a lifetime supply of candy. Four of the five winning children are insufferable brats: the fifth is a likeable young lad named Charlie Bucket (Peter Ostrum), who takes the tour in the company of his equally amiable grandfather (Jack Albertson). In the course of the tour, Willy Wonka punishes the four nastier children in various diabolical methods — one kid is inflated and covered with blueberry dye, another ends up as a principal ingredient of the chocolate, and so on — because these kids have violated the ethics of Wonka's factory. In the end, only Charlie and his grandfather are left. Ostensibly set in England, Willy Wonka and the Chocolate Factory was lensed in Germany (as revealed by the film's final overhead shot). Hal Erickson, Rovi