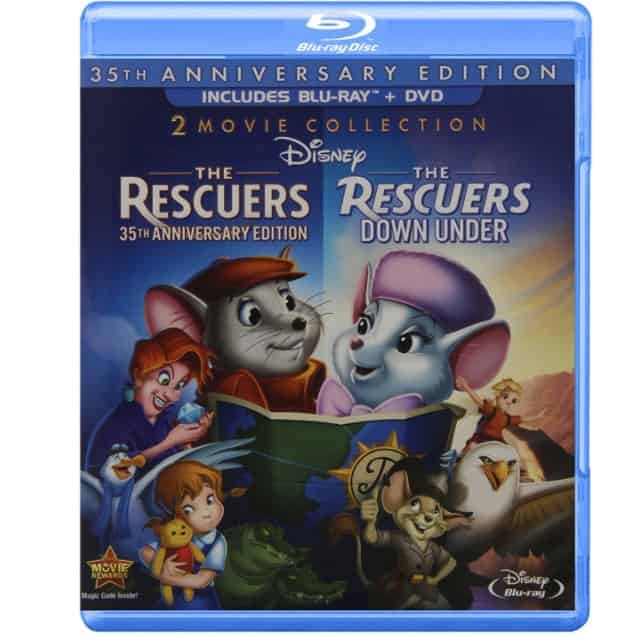 To commemorate the 35th anniversary of an original classic, Disney proudly presents a special 2-movie collection featuring all-time family favorites, THE RESCUERS and THE RESCUERS DOWN UNDER. Join two of the world's bravest mice — Bernard and Bianca — as they set out on two thrilling rescue missions full of comic adventure while soaring through the Devil's Bayou and flying sky high in the Australian outback. Buckle up for the ride of your life as these tiny heroes with great big hearts outrun and outwit their rivals to save the day. Brimming with lovable characters and unforgettable music, this 2-movie collection is high-flying fun for the entire family!|The Rescue Aid Society, an international organization of mice with headquarters in the basement of the United Nations building, receives a plea for help from a little orphan girl named Penny who has been kidnapped by an evil woman, Madame Medusa. Medusa intends to use her to retrieve a fabulous diamond, the Devil's Eye, from a pirate cave. The case is taken by lovely Bianca and Rescue Aid Society custodian Bernard, who becomes her shy assistant. Together, after avoiding two brutish alligators, enlisting the help of the local swamp folk, and turning Medusa and her henchman Snoops against themselves, they rescue Penny and the diamond.|A Mickey Mouse watch can be seen on the wall of the Rescue Aid Society, the international organization of mice headquartered in the basement of New York City's United Nations.|The film was four years in the making with the combined talents of 250 people, including 40 animators who produced approximately 330,000 drawings; there were 14 sequences with 1,039 separate scenes and 750 backgrounds.|The film was one of the last Disney classics to be animated by members of Walt Disney's “nine old men,” the affectionate nickname he gave his top artists at the time.|Animation historian/critic John Culhane was the role model for the character Mr. Snoops. According to Culhane, he was visiting the Disney lot when he noticed the animators taking a more-than-usual interest in him!

If you are doing a lot of Amazon shopping – now is the perfect time to sign up for your FREE 1-month trial of Amazon Prime. You'll get FREE 2-day shipping, FREE movie rentals, FREE television shows, FREE music and FREE ebooks through the Lending Library!