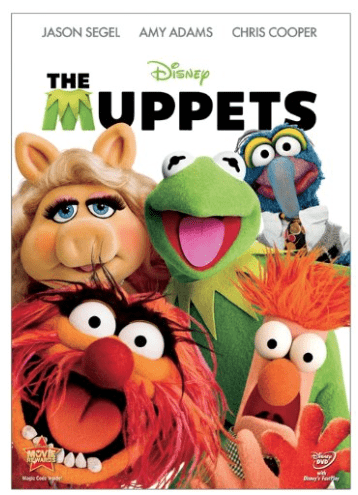 Movie Synopsis: Muppet domination continues with a hilarious new movie from Walt Disney Studios. Jason Segel, Academy Award(R) nominee Amy Adams (Best Performance By An Actress In a Supporting Role, Junebug, Doubt, The Fighter) and Academy Award winner Chris Cooper (Best Performance By An Actor In A Supporting Role, Adaptation) join everyone's favorite Muppets and an all-star celebrity cast in a comic adventure for the whole family. While on vacation in Los Angeles, Walter, the world's biggest Muppet fan, his brother Gary, and friend Mary uncover the diabolical plot of a greedy oil millionaire to destroy the Muppet Theater. Now, the Muppet-loving trio must reunite Kermit, Miss Piggy, Fozzie Bear and their friends to stage the greatest Muppet telethon ever and save their beloved theater. The gang is back together again in a must-own movie full of irresistible music and family fun. Bring home the biggest Muppet adventure ever on Disney Blu-ray(TM) and DVD!