↑
Home » Reviews » Throwing a S’mores ‘Bash in a Bucket’ Party 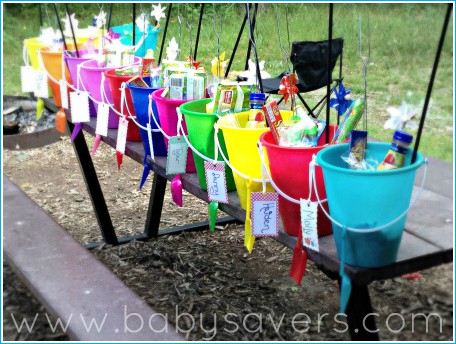 I know I’m not the only one who loves, and I mean loooooooves s’mores. I think there’s something magical in that combination of graham crackers, marshmallows and chocolate. So much so that they’re one of the only reasons I ever find myself camping!

Since 1927, Americans have gathered ‘round the campfire to enjoy S’mores, a classic treat combining HERSHEY’S Milk Chocolate, graham crackers and toasted marshmallows.

Now, HERSHEY’S is encouraging families nationwide to create lasting memories at Camp Bondfire on the HERSHEY’S Facebook page, an interactive app where fans will discover new ways to “bond” around the campfire and create S’mores-inspired memories all summer long.

Campers also have the opportunity to share their own fireside memories by capturing photos and adding them to the Fireside Memory Book at Camp Bondfire.

In addition, S’mores lovers can receive a printable HERSHEY’S coupon to save $1 on their next purchase of two standard six-packs of HERSHEY’S Milk Chocolate bars on the HERSHEY’S Facebook page while supplies last.

When I got an email inviting me to throw a s’mores party featuring HERSHEY’S chocolate and the Camp Bondfire app I knew it was right up my alley! It’s no secret that I love doing things myself and I love chocolate! My assigned theme for the party was “Bash in a Bucket” which left me feeling a bit lost. But a quick phone call to my party-savvy sister left me with a solid foundation of ideas to build on. 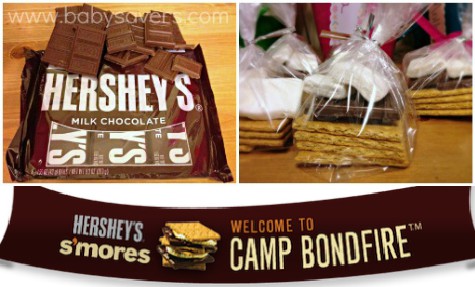 During that same phone call my sister reminded me that about 15 family members were planning a camping trip to a state park within the next two weeks. While we wouldn’t be camping with them, the campground was located only about 10 minutes away from our home, so my husband and I planned on taking Haiden and Piper there to participate in all the camping goodness (minus the sleeping bags and tents!) every day they were going to be there. It was the perfect opportunity to take advantage of the campfire and surprise everyone with a party! 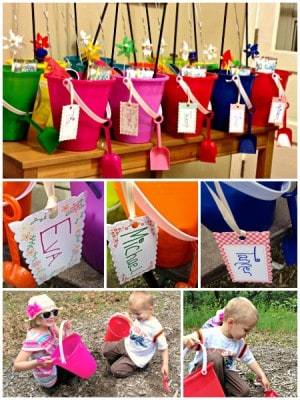 I decided to build an “party in a bucket” for everyone who was going to attend the party. Ages of the party-goers ranged from 2 years old to just  over 60 years old, so I customized each party bucket according to age and gender. Every bucket contained the following:

In addition to all those fun party items, there were seven kids who were ages 12 and under. They got a few extra items in their buckets: 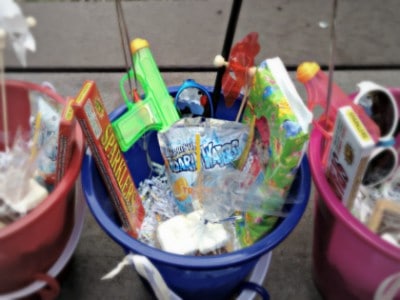 One thing I loved about making the individual buckets was the opportunity to customize each bucket for each partygoer. I took the kids’ favorite colors into account when selecting their sunglasses and squirt guns. I was also able to pick out the adult’s favorite drinks and make sure their buckets had a beverage they’d be excited to drink!

Because each person had to get their own bucket, I made cute little name tags on scrapbooking paper tags and tied them each bucket with ribbon. That personal touch made everyone excited as soon as they showed up at the campsite for the party!

I was so ready to get the party started after perfectly arranging all the buckets on the picnic table that everyone was more than happy to let me try my hand at getting a campfire going. If you haven’t caught on yet, I’m not the outdoorsy type, but I do have quite a bit of determination and persistence in my personality. I combined that with my memories of Girl Scouts and I built a “log cabin” style base for our campfire. 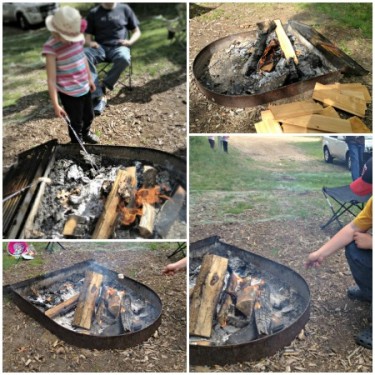 My sister was making fun of my attention to detail as I gathered kindling and paper for the inside of the “cabin” and build the framework of larger sticks around it. But even she was cheering as the fire caught with the first match. I was pretty proud of myself, too 🙂

After the fire had been going for about 30 seconds, everyone wanted to roast their marshmallows and dig into their s’mores. The bigger kids in the group happily took the little ones’ toasting forks and roasted two marshmallows at a time to keep the youngest kids safely away from the flames.

After everyone had their fill of s’mores, the kids took their buckets and attached shovels and went to town in the dirt. Once the 12-year-old constructed an engineering plan for digging a long, complicated canal, he didn’t have any trouble putting everyone else to work to execute the design! I admit, I didn’t think everyone would put their buckets to use at all, but plenty of buckets were full of dirt within about 30 minutes! 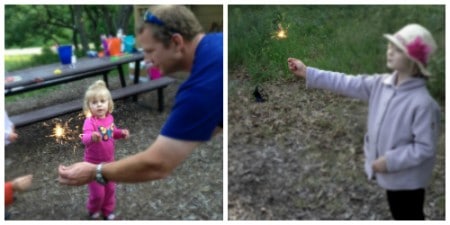 As the day drew on, it became time to light up the sparklers. It’s important to note that the boxes of sparklers state that they should only be used with adult supervision, and I didn’t have any plans to let my little ones out of my sight if they even wanted to have one near them.

The adults and older kids each lit up a sparkler while the little ones stood by and watched. Haiden and Piper were the littlest attendees, and they each cautiously let my husband give them each a sparkler. I’m a bit relieved to report that they were pretty indifferent to them, and they had much more fun watching the rest of us swirl them and dance around with ours.

All in all, our HERSHEY’S Camp Bondfire Bash in a Bucket S’mores party was a huge success, and I’m so happy I have so many photos of the fun times we had!

I’ve found together a lot of photos to keep track of fun family party ideas, and there’s no better place to showcase them than on Pinterest. Follow me on Pinterest and check out my Pinterest Kids Party Ideas board for everything I’ve found!

This post is part of my participation in the HERSHEY’S Camp Bondfire campaign. All opinions expressed are mine.