The Britax brand isn't a stranger in our home. The first convertible car seat I purchased was a Britax Roundabout.

After Piper was born, I stumbled upon two Britax Marathons discounted by 50% at Target. Never mind that they were both brown with pink flowers, Haiden has been sitting in one of those pretty car seats for nearly 2 years!

I've also been the proud reviewer of both a Britax Advocate CS convertible car seat (LOVE it!) and a Britax B-Nimble stroller. To say I'm a Britax fan feels like an understatement. I have to say, I'm pretty sure I'm one of Britax's biggest fans!

Due to growing little ones, my husband and I had to do some car seat rearranging to keep both Haiden and Piper safe and comfortable in both of our cars.

After thinking about how the seats fit in our cars and plenty of research on weight limits and which car seat was best suited for both Haiden and Piper, I concluded that one of the car seats Haiden was in would have to be turned around so Piper could sit in it.

I also learned that Haiden was ready to move into a high-back booster, but I didn't think I was quite prepared to do that! 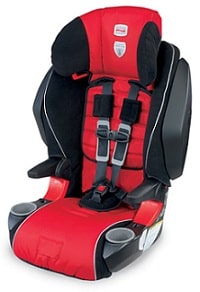 Once I started researching the safety considerations and brand options for boosters, I realized that I could go for the move as long as Haiden could remain in a seat that had a 5-point harness.

Being the Britax fan that I am, I was so happy to learn that the Britax Frontier 85 SICT booster seat was everything I could ever hope for in a booster seat I was trusting to protect my child:

While many other highback booster seats are an elevated seat that utilize the car's shoulder and lap belts to keep the child secure in the car seat, the Britax Frontier Booster uses the LATCH system to attach the booster to the car.

The child is then buckled in with a 5-point harness instead of the car seat belt, ensuring a snug fit that's just the right size for a little body. 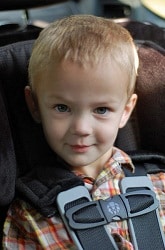 This particular model of Britax Fronteir also utilizes SICT, which is Side Impact Cushion Technology:

Side impact crashes pose a serious threat to child safety and therefore make side impact protection a necessity for child seats. To learn more about what happens during a side impact crash and how injuries occur, visit the About Side Impact Crashes page.

During a side impact crash, the energy-management cushions divert crash forces away from your child, therefore minimizing the risk of injury.

In addition, Side Impact Cushion Technology is the first and only technology to offer protection by:

All those safety features made me realize that there was absolutely no other booster seat that I was willing to put my little 3-year-old boy in.

I was thrilled, and I mean THRILLED when Britax sent me the exact same booster seat I was researching because they wanted Haiden and I to try it out!

Another great feature that I didn't even know about until the seat was unpacked was that the seat converts to a “regular” booster.

That means it will fit Haiden until he's 85 pounds. I can't even imagine what life will be like that far into the future, but it's pretty amazing to know that the same product will be in use, protecting Haiden by that time!

The only surprising aspect of the booster seat that didn't thrill me after it was installed was the size of it. It's heavy, which is totally fine with me.

To me, heavy = sturdy and sturdy = safe. The dimensions, however, are something that should be taken into account when deciding if the seat is right for your family.

This seat is wide. At 27 inches across, it's actually several inches wider than the Britax Marathon, Advocate and Boulevard. This wasn't something that I'd noted before installing it, and I had assumed that all boosters were narrower than their convertible car seat counterparts.

I had been counting on having a little more room in the middle seat between Haiden and Piper to take on an additional passenger every once in a while, but that wasn't going to happen with the Britax Frontier SICT 85. 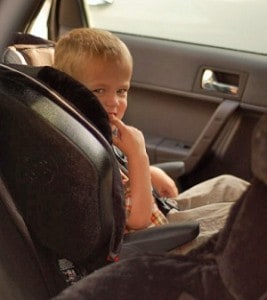 Like all the other Britax car seats we're using, the Britax Frontier 85 SICT installs perfectly and easily into my Ford Escape and Jamess's Ford Focus. Once we knew that the booster's size would impede me from having enough room in the middle seat for another person, we opted to keep the new booster seat in James' car.

It's no surprise that I love this car seat in person as much as I loved it on paper. Haiden is very comfortable in it, and he's loving the fact that he has cupholders of his very own!

Like all Britax car seats, the price point is relatively high. At an MSRP of $340, it's more of an investment compared to other popular baby brands.

On the other hand, I truly believe you're paying for Britax's research and technology that makes this booster seat one of the safest brands on the market.

If that doesn't convince you, this excerpt from a customer review on Amazon might sway you:

...We were in a freeway rollover accident yesterday in our Honda Pilot that completely totalled the car. My precious 4 year old daughter was all strapped in tight in this carseat and walked away without even a scratch. As soon as I finish up this review, I am buying another one. Seriously, when you are in an accident like that, won't you be glad you put your munchkin in the safest seat possible…

In my research, the best price for the Britax Frontier 85 SICT is on Amazon. It's currently $255, which is 25% off the list price. It can also be found on Target.com.

I received this booster seat from Britax to faciliate this product review. I'm very particular about the products I review, and I fully stand behind this one and the Britax brand. All thoughts and opinions expressed are my own.