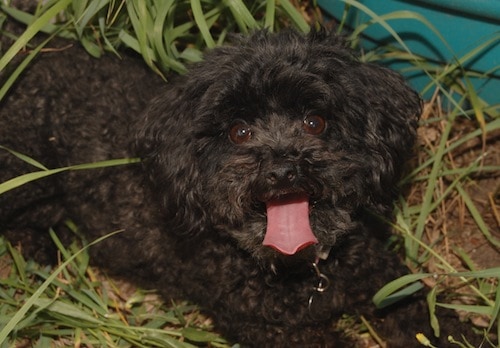 Are poodles good with babies? That’s a question I get asked all the time. Even friends who don’t have plans for little ones in the near future are interested in how well poodles get along with babies.

I found my rescued poodle online when I was four months pregnant with my first baby. I wasn’t planning on having a new dog and a newborn, but my emotions made the choice for me, and I’m so grateful for every day she’s (literally) by my side.

Jersey became part of our little family from her first days in our home. She demonstrated her incredible ability to play fetch with herself on the second day with us, but we never saw it again once she realized she had two humans who would play fetch with her all the time.

We brought our first baby home a few months after Jersey moved in. I would be lying if I said I wasn’t nervous about how our poodle would react to a baby. I’m being 100% truthful when I say I had absolutely nothing to worry about: 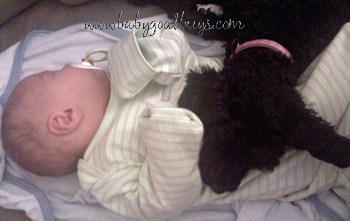 I took that photo with my cell phone the evening after our baby and our dog met. I actually cried I was so happy, relieved and touched that Jersey was clearly so at peace with her entire new family.

Four years later, I’ve never regretted adopting Jersey. In fact she’s made me happier than I ever imagined a dog could make me. She’s had some major medical problems since she joined our family, but instead of worrying about the money spent on her, I’m only relieved she’s in a home where her problems won’t be ignored.

My dog has brought so much love into my entire family’s lives, and I fully admit that I spoil her whenever I can. She loves getting her Cesar Meaty Selects food for dogs and it’s so fun to give her food that she loves. 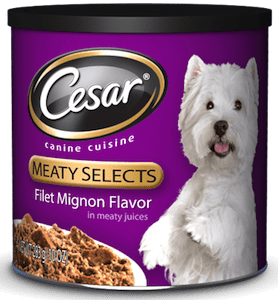 I received a few cans of Cesar’s food for small dogs to give to Jersey. The information I got with the samples said that Cesar Meaty Selects can be served alone or as a delicious compliment to your dog’s favorite dry food. Jersey’s only 5 pounds, and fully switching her food is really hard on her system, so I chose the latter.

I give her a little scoop of Meaty Selects on top of her regular food. It makes her gobble up the dry food after she devours the Cesar, and it’s fun to see her so energetic about her best dog food!

I wrote this review while participating in an ambassador program by Mom Central Consulting on behalf of Cesar and received product samples and a promotional item to thank me for taking the time to participate.