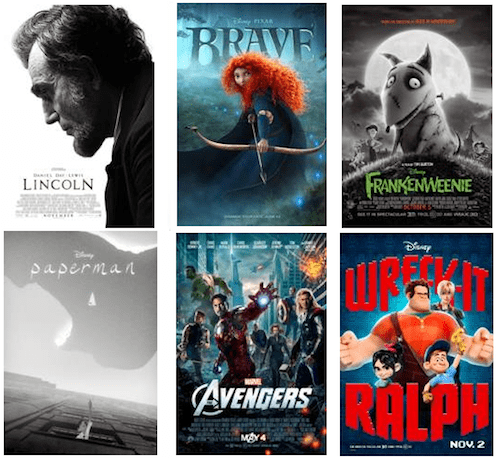 Many of you know that Brave has a special place in my heart. But it’s also no secret that anything Disney gets to me. That’s why I was so happy to get the news that The Walt Disney Studios is celebrating 17 Academy Award nominations!

Brave, Frankenweenie, Wreck-It Ralph, Paperman and Marvel’s The Avengers each received one Oscar nomination. Lincoln has 12 nominations, including a nomination for Best Picture!

Steven Spielberg, the director/producer and Kathleen Kennedy, the producer of Lincoln said, “We are absolutely thrilled and astonished with the 12 nominations. It is such a tribute to the work of those who joined us in this 12-year journey to bring LINCOLN to the screen. We humbly thank the Academy members who honored so many of us.”

We are incredibly honored by today’s Academy Award nomination. ‘Brave’ has been an adventure from the beginning – starting with our research trips to Scotland, the crew embarked upon a journey that inspired us all and forever changed our fates. Thanks to the Academy from all of us here at Pixar.

the 85th Academy Awards will air live on ABC on Sunday, February 24th. Visit Oscar.com for details on all the nominations!