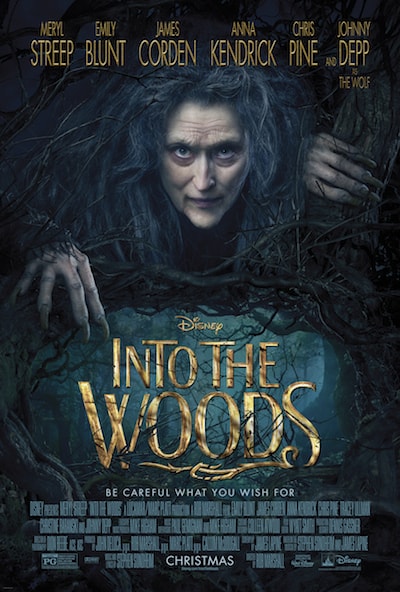 If you weren’t aware that Disney is releasing their film adaptation of Sondheim’s Into the Woods on Christmas Day, it’s time to learn more about it.

Seriously, Johnny Depp is playing the Wolf in this retelling of several fairy tales and I think he’s going to be absolutely perfect in this role.  I don’t think there’s an actor who can suspend my belief like he can!

The cast of Into the Woods is full of stars beyond Johnny Depp: Meryl Streep,Christine Baranski, Anna Kendrick, Chris Pine and plenty of others. I love musicals, but this is going to be a must-see film for everyone!

The above image is the new movie poster for Into the Woods. I’m pretty sure Meryl Streep has never looked so creepy!

Be sure to check out the Into the Woods trailer I shared a few weeks ago!

Into the Woods is rated PG. It will be released in theaters on December 25, 2014!

The film is a humorous and heartfelt musical that follows the classic tales of Cinderella, Little Red Riding Hood, Jack and the Beanstalk, and Rapunzel—all tied together by an original story involving a baker and his wife, their wish to begin a family and their interaction with the witch who has put a curse on them.

“Into the Woods” is a modern twist on several of the beloved Brothers Grimm fairy tales, intertwining the plots of a few choice stories and exploring the consequences of the characters’ wishes and quests.