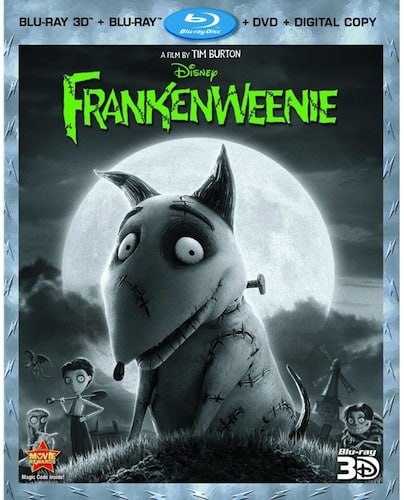 I love everything Disney and I think anything from Tim Burton is obsession-worthy, so I’ve been extra excited about Frankenweenie, Disney’s film by Tim Burton!

I had the privilege of interviewing Frankenweenie producer Allison Abbate during a special screening of an extended preview of Frankenweenie last summer. My favorite tidbit from that interview was that the story of Frankenweenie is the first full story that Burton conceived and that this movie has been “in the making” since he was 10 years old!

The Blu-ray Combo Pack’s spectacular picture and sound enhances the tale of a boy who uses the power of science to bring his beloved dog back to life … and a whole town faces the unexpected and electrifying truth of what happens when monstrous experiments run wild!

Frankenweenie was just released for purchase on January 8th! You can buy it starting at just $9.99 on Amazon.com. The Frankenweenie 4-disc combo with the digital copy has a value of $40, but it can currently be purchased for just $35!

Want to Win a Frankenweenie Blu-Ray and DVD prize pack?

One lucky winner will receive the following items bundled together in one exciting package:

Disclosure: This article and giveaway were provided by Disney and In Home Media. All opinions expressed are 100% my own.