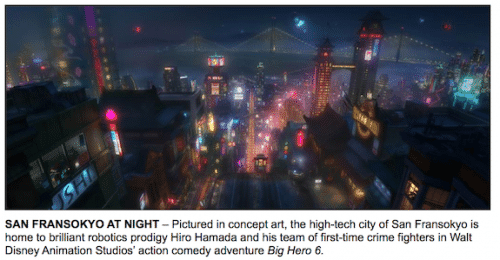 Fresh from my inbox: Disney’s Big Hero 6 concept art! I just received word of the latest announced Disney animated film, Big Hero 6! Scroll all the way down for a full synopsis of Big Hero 6, but here’s a quick summary:

Hiro Hamada and his robot sidekick Baymax work with a team first-time crime fighters to save his high-tech city, Sn Fransokyo, from a criminal threatening to destroy it.

The film is inspired by the Marvel Big Hero 6 comics and it’s slated to be in theaters at the end of 2014!

I have some Big Hero 6 concept art to share with you for now, and it’s beautiful! The above image and the one below gives you a taste of what the film will look like: 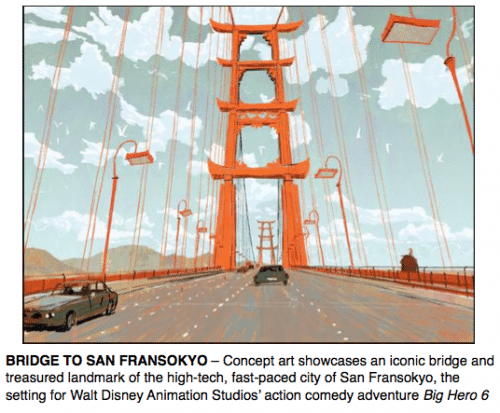 From Walt Disney Animation Studios comes Big Hero 6, an action comedy adventure about brilliant robotics prodigy Hiro Hamada, who finds himself in the grips of a criminal plot that threatens to destroy the fast-paced, high-tech city of San Fransokyo.

With the help of his closest companion—a robot named Baymax—Hiro joins forces with a reluctant team of first-time crime fighters on a mission to save their city.

Inspired by the Marvel comics of the same name, and featuring comic-book style action and all the heart and humor audiences expect from Walt Disney Animation Studios, the CG-animated Big Hero 6 hits theaters in 3D on November 7, 2014.