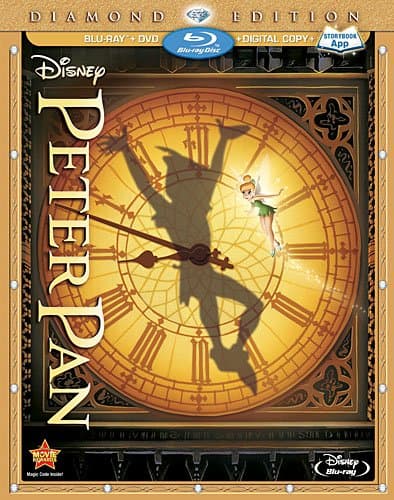 eter Pan is one of those movies that brings back nothing but happy memories for me. There are so many magical moments in the movie, and it's one that's definitely stood the test of time!

This year marks the 60th anniversary release of Peter Pan, and The Walt Disney Studios is celebrating the new release with a new digital restoration with high-definition picture and sound. It's also  the first time the film has ever been released on Blu-ray!

Peter Pan is a timeless classic from Disney’s Golden Age of animation.  The film is one of three to boast all nine of Walt’s famous “Nine Old Men” as Directing Animators, and is a revered audience favorite.  “Peter Pan” Diamond Edition 3-Disc Blu-ray Combo Pack will be available for a limited time only for the suggested retail price of $44.99 (US) and $51.99 (Canada) from Walt Disney Studios.

Peter Pan was just released for purchase on February 5th. You can buy it starting at just $14.99 on Amazon.com. The Peter Pan Diamond Edition combo with the digital copy and storybook app has a value of $44.99, but it can currently be purchased for $27.99!

One lucky winner will receive the following items bundled together in one exciting package:

Disclosure: This article and giveaway were provided by Disney and In Home Media. All opinions expressed are 100% my own.