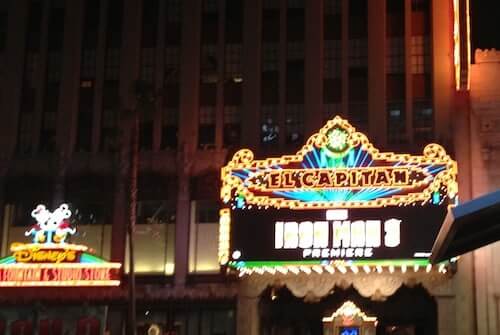 Late last month I took part in the Iron Man 3 event, which included the excitement of walking the red carpet at the El Capitan Theater for the premiere of Iron Man 3. I had never been in that Theater before, and I was in awe of the beauty inside the theater, as well as the spectacular lights of the theater’s exterior! 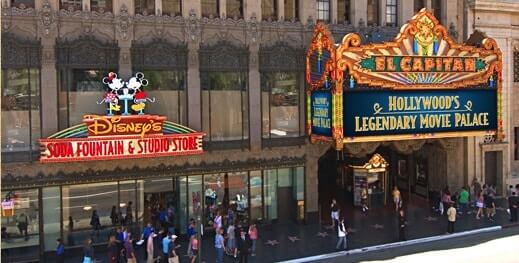 The day after the Iron Man 3 premiere, our group was invited for a private tour of the El Capitan Theater and breakfast at the Disney Soda Fountain.

I had been so star struck and centered around the Iron Man 3 premiere the previous night that I really didn’t appreciate everything that makes the El Capitan Theater special, so I was especially glad to have some time to view the finer details of the theater and appreciate the history within its walls.

Ed Collins, the Executive Director of Operations for the El Capitan Theater, was kind enough to give us the tour, and it was clear that he has a deep-seated love and appreciation for the theater itself. I got the definite impression that he took his job very seriously and he considered it a privilege to be able to share so much interesting information about the El Capitan with us. 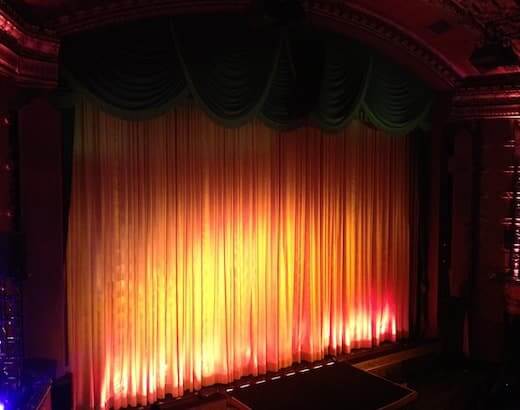 The El Capitan Theater has been around since 1926, but only stage shows were performed there for the first 15 years of its existence. The people who restored the theater starting in 1989 uncovered plenty of Playbills and newspaper ads detailing famous names who had appeared in shows on the stage of the El Capitan. Rita Haworth, Clark Gable and Bob Hope are just a handful of people who shared the El Capitan stage.

The El Capitan took on its first movie premiere with Citizen Kane. Isn’t that amazing? One of the best movies of all time premiered at a theater that wasn’t even a movie theater! The reason for that it was because the movie wasn’t a favorable impression of William Randolph Hearst. Then, when it was time to find a theater to premiere it, no theater wanted to show Citizen Kane because Hearst’s newspapers reviewed the movies showing at those theaters, and they didn’t want to be on his bad side.

Mr. Toberman, the owner of the El Capitan, decided to try a movie showing, and the first premiere was Citizen Kane in 1941. After the success of that premiere, the owner decided to close the theater, modernize it and reopen as The Paramount movie theater in 1942.

When Disney acquired the El Capitan Paramount Theater in 1989, the executives chose to restore the location back to the original El Capitan Theater that opened in 1926.

There’s such a unique blend of past and present decorating the theater–it’s practically a show business muesum!

The El Capitan Wall of Fame holds an enormous collection of programs, photos and artifacts of key times from the theater’s history. These are just a few of my favorite parts of the wall of fame: 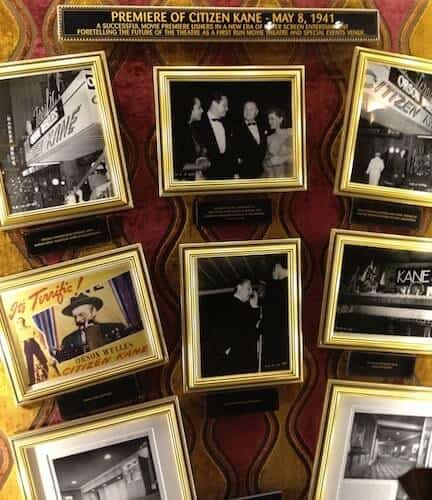 These are photos from the premiere of Citizen Kane in 1941. 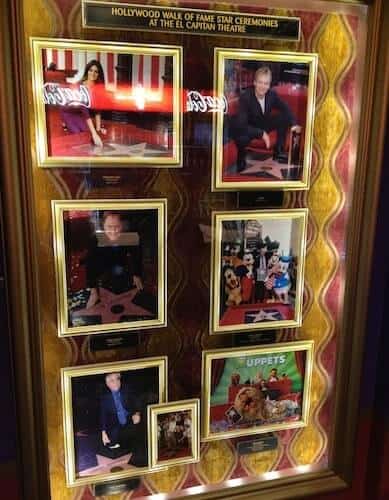 There were lots of interesting photos from a variety of Hollywood Walk of Fame star ceremonies that took place in front of the El Capitan Theater over the years. 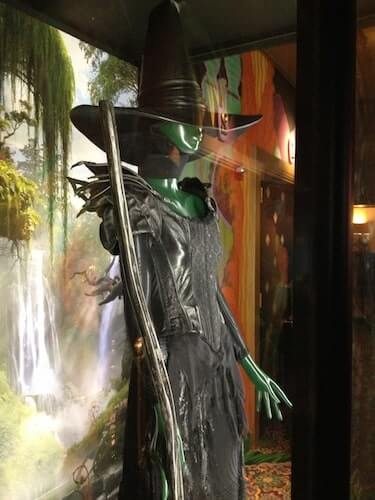 I also loved seeing all the actual props and costumes from Oz The Great and Powerful that were on display in glass cases around the theater. While there were several displays, my favorite was the one with the Wicked Witch costume pictured above. I was in love with the fact that it was perfectly formed onto a green mannequin. Seriously, Disney just thinks of everything!

That morning also included breakfast at the Disney Soda Fountain (located adjacent to the El Capitan Theater) and we got to experience their brand new party room. 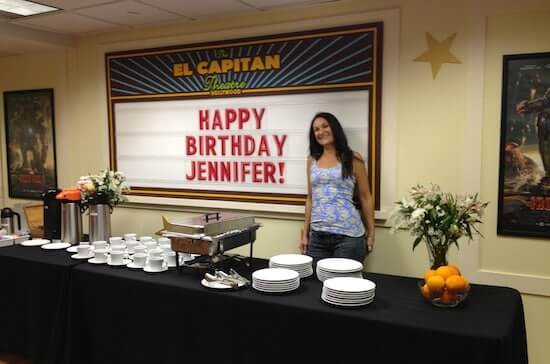 Their party room is now available for private parties to rent and have a party with a red carpet theme. We even had one member of our group, Jennifer from Makobi Scribe, who was celebrating her birthday on our trip. 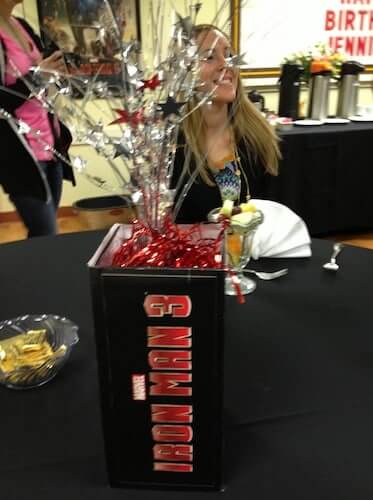 To everyone’s surprise, the El Capitan had made our breakfast into a little birthday party for her! It was really fun to experience a real birthday party in the party space!

The theater will decorate the party room with the movie that’s showing on the big screen of the El Capitan at the time, so we, of course, had an Iron Man 3 party!

There were fun Iron Man 3 centerpieces on every table and coordinating balloons tied to each custom Mickey Mouse chair. The room also had framed Iron Man 3 movie posters placed around the room.

Since Iron Man 3 is currently playing at the El Capitan Theater the parties held at the Disney Soda Fountain will also have an Iron Man theme!

The private party rental at the Disney Soda Fountain with the El Capitan Theater tie-in is such a fun idea, it makes me wish I could have one of my litte ones’ birthday parties there this summer–especially when the theme changes to Monsters University or Planes! 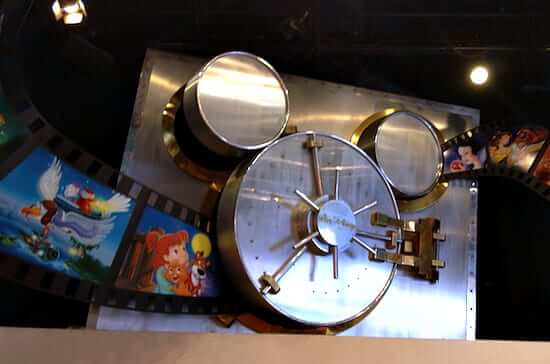 For me, the most fun part of the Disney Soda Fountain is a real representation of the Disney Vault (aka “Walt’s Vault”) that’s depicted in a lot of promotional clips for Disney DVDs and Blu-Ray sets. This is the video vault where the movies are “kept” when they’re not sold.

According to Mr. Collins: So it was a marketing campaign, right? [The vault] was digital, virtual. When we opened the store we teamed up with Disney Home Entertainment to have the real vault at our location in Hollywood.

If you look at the strip of film that rims the ceiling, that actually relects the DVDs in the order they came out starting in 2005.

The theater director said that it’s really fun for Disney Soda Fountain guests to see how many of the movies on the film strip they can identify. It was true! There was a little kid in there doing exactly that as I exited the store. 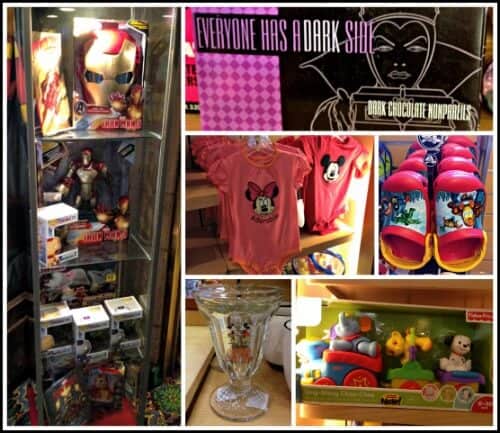 As a lover of all things Disney, I was happy I had a few minutes to shop and pick up a little gift for both Haiden and Piper. The store had a great selection of Iron Man merchandise, and there were also plenty of traditional Disney character merchandise to choose from.

Overall, the Disney Soda Fountain and El Capitan Theater together offer a fantastically unique experience for both kids and adults. If you’re ever in Hollywood you should definitely check it out!

Interested in what’s going on at the El Capitan Theater this summer?

IRON MAN 3 is currently playing at the El Capitan Theatre in Hollywood, CA until June 20th in Disney Digital 3D and Real D 3D. You’ll also be able to see a Display of Collectibles & Comic Books from the Private Collection of Stan Lee!

For tickets to these or future events call 1 (800) DISNEY6 or visit www.elcapitantickets.com. You can also like The El Capitan Theater on Facebook and follow @ElCapitanThtre on Twitter to interact with the theater and find out about current and future theater events.

Disclosure: Thanks to Disney for covering my travel expenses for my participation in the Iron Man 3 #IronMan3Event press trip, which included this tour and event.