↑
Home » Entertainment » Exclusive: See a New INSIDE OUT Deleted Scene Here & Buy Inside Out on 10/13! 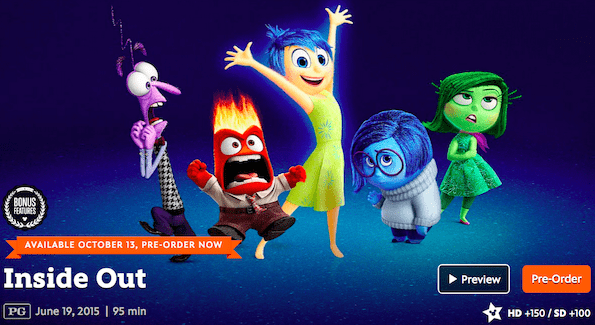 You may have heard that Disney-Pixar's Inside Out is arriving on Blu-ray and DVD combo pack on November 3rd, but did you know that Inside Out will be available on Digital HD and Disney Movies Anywhere starting tomorrow, October 13?

So if you can't wait to buy Inside Out on Blu-ray and DVD, buy your digital HD copy tomorrow and watch it right away!

A few weeks ago I was on a special Disney press trip that included participating in an Inside Out press day. I interviewed some talent from the movie (so much more on that later!) and I was one of the first to screen Riley's First Date, the all new short that's included when you purchase Inside Out in any format!

I'm also one of 25 bloggers exclusively chosen to show you the newest deleted scene from Inside Out. Check out Joy's Decline, with a special intro from the director, Pete Docter:

If you've never seen Inside Out check out the official Inside Out trailer. Be prepared, you're going to want to see the whole movie after watching it!

Buy Inside Out on Digital HD today so you'll be set to watch it tomorrow, or pre-order the Blu-Ray DVD combo and have it delivered on its release date!