My sister always hosts our family Thanksgiving dinner at her house, and my family and I always stay at her house when we come to visit. I love to be in the kitchen, so that means I'm usually with her from the start of the day till the end of the day.

The last time I spent Thanksgiving there, my sister and her family had recently moved to a new home. I was getting used to the layout, which involved a small kitchen with new appliances.

We woke up bright and early and my sister asked me to preheat the oven to get some of our dishes cooking. Thankfully, I remembered that, due to the limited  storage space, my sister and her husband utilized their oven for storing other kitchen items. Maybe not the safest idea, but it wasn't my kitchen.

So I took the items out of the oven, which included half a pan of apple crisp, some cookie sheets and a loaf of bread. Then I started the oven and hopped in the shower. After dressing and heading back to the kitchen, I thought I smelled something funny.

Me: Do you smell something funny?
My sister: I think that's just the heat turning on in the morning. It's a new furnace.
Me: Ok.

We started dicing vegetables and peeling tons of potatoes and sweet potatoes. All the while, the bad smell kept getting stronger. I opened the oven to make sure I hadn't forgotten a dish or something in there when I had turned the oven on.

Finally, my sister put down her potato peeler, popped the turkey breasts in their roasting pans and prepped them to go in the oven. When she opened the door, smoke billowed out and the smoke detector immediately started beeping.

I was furiously fanning a magazine under the smoke detector when my brother-in-law grabbed the magazine from my hand, reached up and took the battery out of the smoke detector. We opened windows while all six kids in the house started running around saying, What's that smell? Why does it smell so bad in here? What's burning? When will it stop smelling bad?

When the smoke dissipated and the oven cooled off enough to open it and look inside it still took us a minute to find the source of the burning smell: a full-size plastic slotted serving spoon had fallen between the oven racks and was about 75% melted in the back corner of the oven!

On top of the smoke and the smell, even removing the melted spoon was a challenge! Finally, my sister went and got metal barbeque tongs from her garage and picked it up, in pieces, and put it all on a paper plate to throw away.

I have to say, that house smelled terrible for days after that spoon melted and burned in the oven. Not enough to ruin dinner, though! 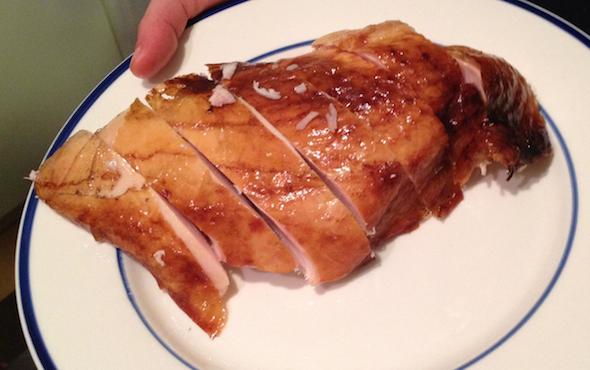 The turkey breasts turned out beautifully. That year, I think my sister and I were truly thankful that we were able to serve a good Thanksgiving dinner at all!

Do you have any funny Thanksgiving stories to share? Feel free to write about them in the comments!