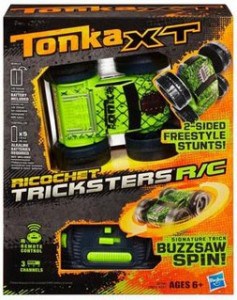 Kids can show off their driving skills with the Tonka XT Ricochet Tricksters Remote Control vehicles!

Vehicles included in the Ricochet Tricksters R/C assortment have the power and performance you need to conquer cool tricks and tough terrain.

These full-functioning, double-sided stunt vehicles can perform freestyle stunts & each include a pre-programmed stunt, flip, spin, or zig-zag, that can be executed simply by pushing the Trick Trigger button on the IR controller. Models include the Rampage Flip, Buzzsaw Spin and Zig Zag Jolt.

MSRP on the Tonka Ricochet Tricksters Remote Control vehicles is $24.99. They’re intended for kids ages 6 and up.

The Tonka Ricochet Tricksters vehicles are available on Amazon from just $9.99 and at Target.com for $19.99. They’re also available at most major toy retailers nationwide and on HasbroToyShop.com.

The 2011 Baby GoodBuys Holiday Gift Guide may contain advertising information provided by the manufacturer or PR representative. I’ve chosen to feature all the items, but they should not be considered a review or endorsement unless otherwise stated. –Marybeth