↑
Home » Entertainment » Interview with The Director and Executive Producer of BRAVE 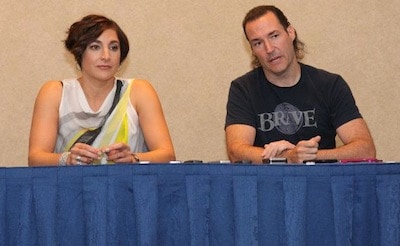 I had an excellent time experiencing all things BRAVE earlier in the month in Los Angeles. One of the highlights was participating in round table interviews with instrumental players in the making of the movie.

Mark Andrews is the director and Katherine Sarafian is the executive producer of Brave. We had a little less than 20 minutes with them, but they fit in a lot of great details about themselves and the movie. Here are some of my favorite parts:

What kind of age group are you seeing for Brave? Is 6 years old a good age?

Mark Andrews: I think it’s for everybody. That’s the parents’ prerogative, As parents, we know our children so we would know whether it would be good for them or not. I mean I have my five year old. He can watch Lord of the Rings, PG13 movies, Ghost Rider…

Katherine Sarafian: You took him to Ghost Rider?

Mark Andrews : Oh, yeah, that’s what they want to see…they can definitely take it. I don’t know about other children but I think it’s up to the parents.

Katherine Sarafian: I think it’s a good question. There’s no specific age we would say start it, but, I would say it’s a real PG movie. It’s a PG movie for a reason. We’re advertising it as PG because…even in the classic G-rated Disney tales they’re usually killing off a parent or shooting somebody in the woods. Those had some dark elements. This one though it is a PG [because] of scary action that’s in there. I think every parent will have to make the choice.

I’ve got a three year old and a three month old. They’re not going see it for a while. They’ll see it when they’re ready.

Was the character of Merida always going to be a Scottish princess?

Mark Andrews: Yes, from the original pitch. The three things that John Lasseter and Pixar look for is they look for:

So Brenda Chapman, my fellow director on the project, her original pitch was about that parent child relationship based on her own experiences with her own six year old daughter who was very precocious and independent. She kind of projected ahead asking, What kind of teenager is this little girl going to be if she’s already a teenager at six?

And [Chapman] has a love for Scotland. It’s a land that’s rich with legends and stories [we put it into Scotland’s history. We wanted to] call a story from that environment and that’s what she pitched to John Lasseter at Pixar and they said, That sounds great, let’s do it. Then the details of how it worked out, we hammered that out for the next five to six years.

Can you talk about the stereotypes and roles of girls and fathers in the film?

Katherine Sarafian: First we had to create the character of Merida. We had to put on blinders about gender and just try to create a heroic character. If we focused on [the fact that] she’s a girl character, she’s a girl, then [we knew we’d] get all caught up in the conventions and stereotypes of being a girl, a princess, and having all the rules to go with it.

We had to blow up the stereotype and just focus on a hero who could have been a man or a woman, a girl or a boy. We just had to create an appealing character.

Now, there’s so much being said about the first girl. It was important to us that we cast this character to be not a tomboy at all.

Was the bear always part of the story?

Katherine Sarafian: Yes, from the beginning. We wanted to make sure that a transformation [took place]; this idea of wanting to change your family, change your mom, change your surroundings, change your circumstances.

Obviously any teenager can probably relate to that, but changing this mother into somebody who was huge and imposing and who could be hunted by father, was a really cool concept to us and then changing mom into something that couldn’t speak.

We never wanted to do a Scooby Doo type thing where you can kind of make out what she’s saying. All she can do is pantomime. She cannot speak. She has to listen and these two who don’t listen to each other reach a point where they can’t help but learn from each other and keeping mom unable to communicate with her voice was part of that.

Mark Andrews: What animal protects their child more than a mother bear? I’ll get in front of a female lion and her cubs. Probably I’ll get killed but not as bad as a mother bear. I just need to see the bear cub in real life and go as far the other way as I can because that thing is gonna be relentless and that was of one of the themes…

Mark Andrews: …that we were working with is that the child misunderstands this love of the parent.

Katherine Sarafian:  The term, mama bear, exists for a reason. That really is that protective maternal bear thing.

How long did the entire filmmaking process take?

They were nice enough to pose for a group photo at the end of the interview: 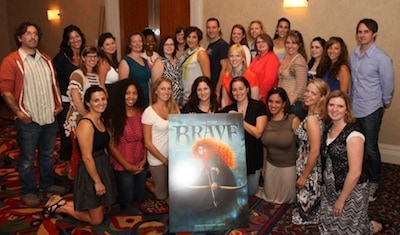 Those were my favorite parts of the interview. I loved the insight into their personal lives and how that affected the filmmaking process.