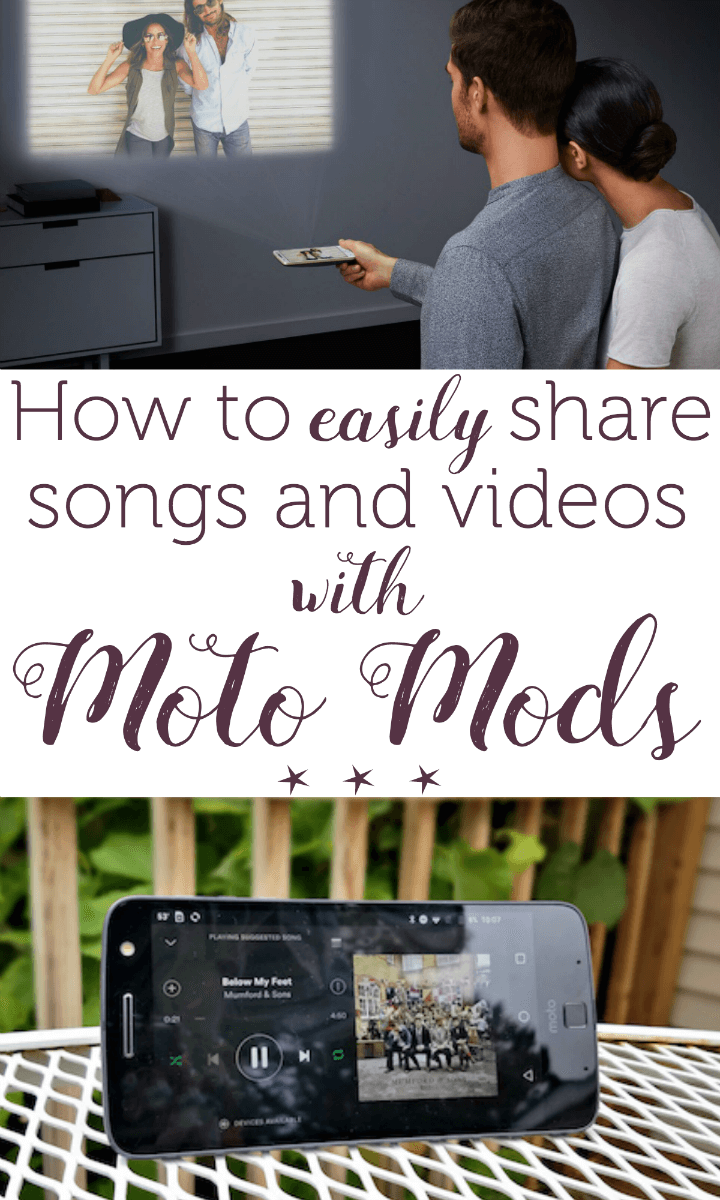 I recently received a package from Verizon and the #VZWBuzz team that blew my mind: 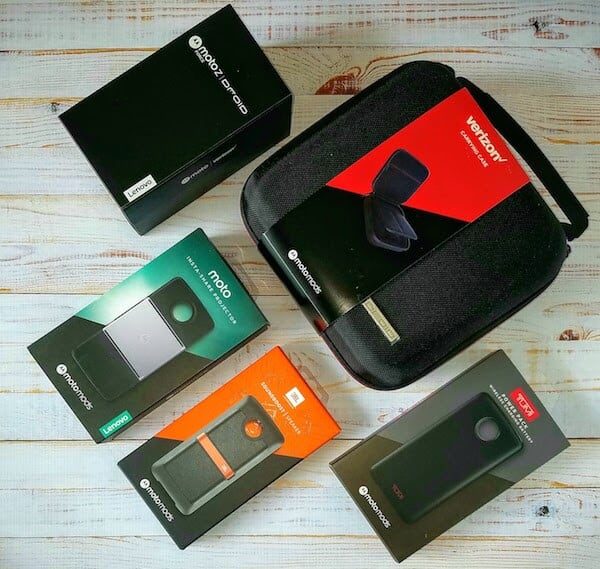 That's the Moto Z Force Droid with these innovative new snap-on gadgets called Moto Mods. These are the Moto Mods I received:

Moto Mods can easily turn your phone into a stereo, a television, a battery powerhouse and more. Inventors and developers are coming up with new ideas for Mods even as I'm writing this, and the possibilities for this type of technology are endless! 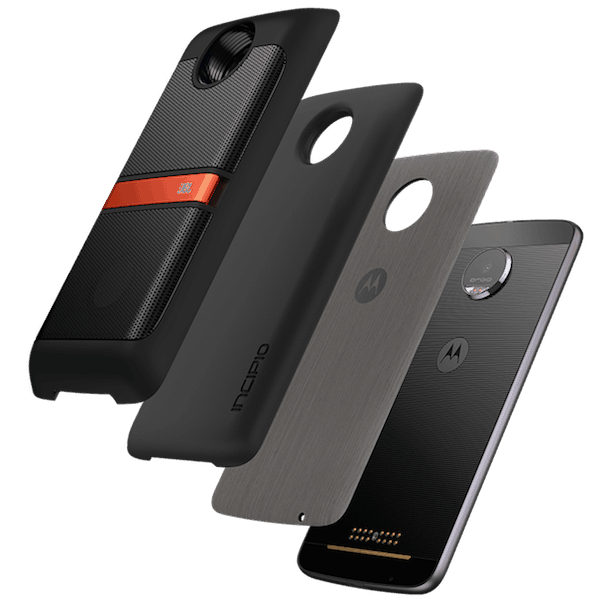 The mods are super simple to use. The Droid phone is at the bottom of the stack in the above picture. It has those little gold dots near the bottom. Those dots are magnets.

This is the phone I received with the included back removed: 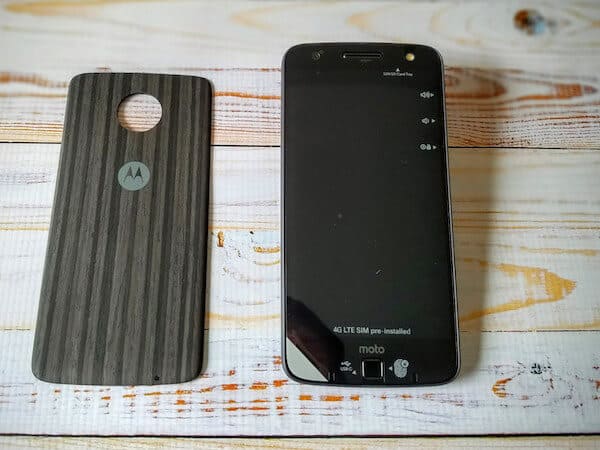 Pop the back off the Moto Z phone. Snap on a Moto Mod. The phone will automatically recognize the mod and start it up.

How many times have you had a group of people all gathered around someone with a phone to watch a video or listen to music? While I love sharing the best stuff I find online and having someone else share their finds with me, this group sharing always goes the same way.

Someone can't see. Another one can't hear. One person pulls out their own phone, steps to the side and starts watching the same video on their own. Others join the second person. The first phone gets passed around or brought to another room to show someone who missed the first viewing. It's silly, right?

But our culture of sharing entertaining or interesting audio and video clips isn't going anywhere. Moto Mods just make it a million times easier to share our media with whoever we want, whenever we want. 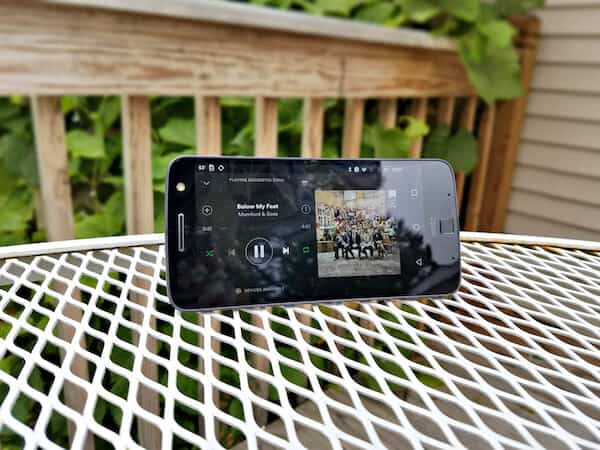 The JBL Soundboost transforms your phone's “good enough” speaker into it's own stereo.

If you thought bluetooth speakers were compact and portable, you have to try the Soundboost. It's about the same size as a phone and it stays connected to the phone. You don't need to worry about connections, sharing devices or going out of range of the speaker. 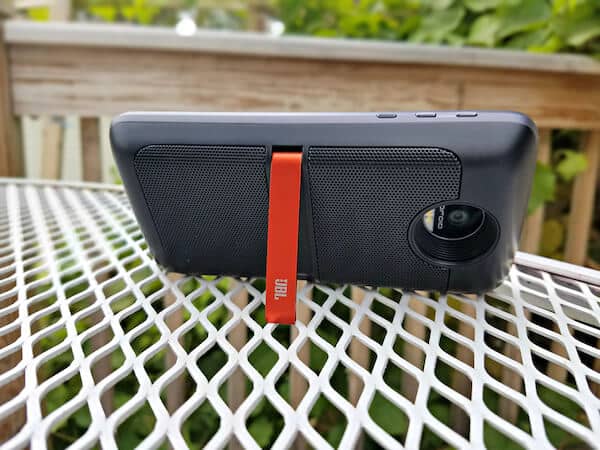 The icing on the cake with the Soundboost is that the quality is fantastic. I listen to music all day, and I've become used to listening to Spotify via my computer. This blows my computer's speakers out of the water!

Then there's the projector. The projector is what everyone will want after you demonstrate it for the first time. 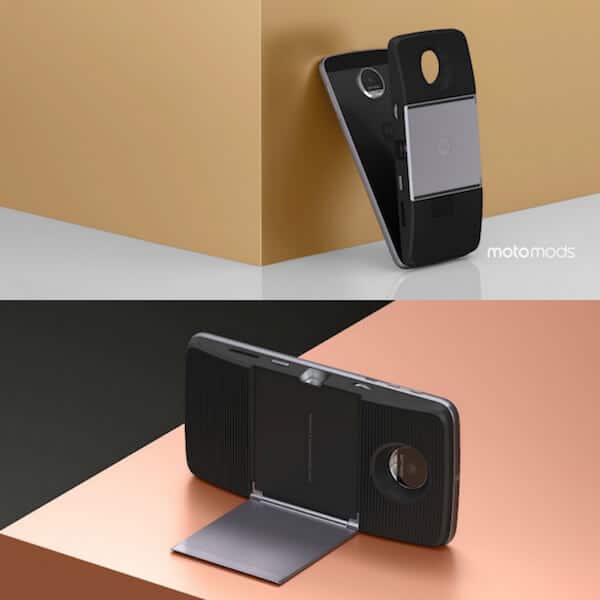 It wasn't until I used the Insta-Share projector that I realized how close we are to being done with standard televisions.

Forget the big screens and the wall mounts, the projector makes it possible to project your phone's screen when you want to start sharing. 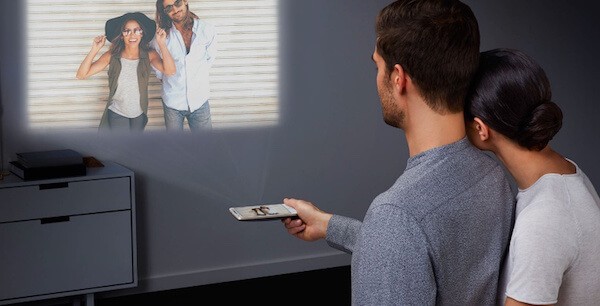 I was shocked at how great the picture is, too. the Insta-Share projects a picture up to 70 inches, and there are all sorts of built in features to adjust the screen size and angle automatically.

Since I've received the projector I've watched my favorite shows on my bedroom ceiling, Youtube videos on the wall and short cooking clips at my grandma's decidedly non-tech house.

On top of the audio and video entertainment you can also have a lasting battery thanks to the easiest battery backup I've ever used.

The Tumi Power Pack easily snaps onto the Moto Z phone just like any of the other Moto Mods. It starts immediately charging the battery without any additional cords or plugs.

I've yet to need the Power Pack for an extended period of time but I love having it. The knowledge that it can add up to 22 hours of battery life to my phone is one of the best reassurances I can get that my phone will always have power!

I think Moto Mods are going to be a top holiday tech gift this year, and I'd love to see a ton of people using them! Check out all of them at your Verizon store or at Verizon online.