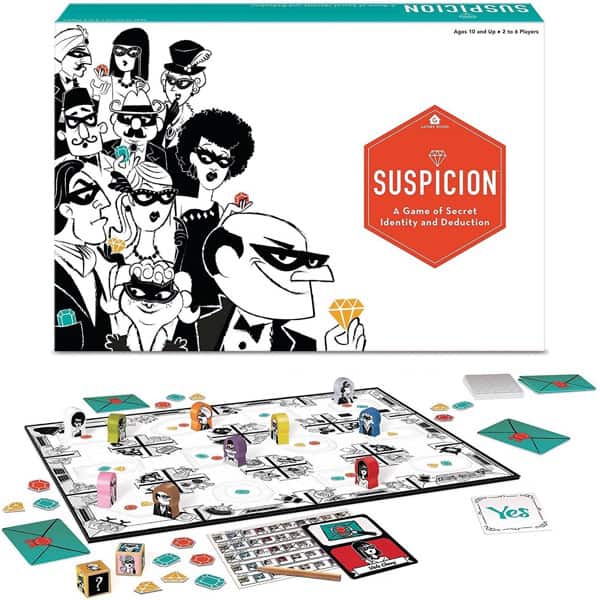 The Suspicion board game makes an excellent family gift! It’s appropriate for ages 10 and up.

A fast-paced game that’s fun for all ages!

You are a jewel thief, and you’ve been invited to the mansion of someone who doesn’t know that you engage in such nefarious doings.

While at that mansion, you’re going to try to nick as many jewels as possible, but the mansion turns out to be filled with jewel thieves who are all trying to do the same thing! Can you out them publicly, while staying unknown yourself and bagging a nice collection of gems?

In Suspicion, ten characters start on the perimeter of the game board On a turn, you roll two dice, then move the two characters shown.

After this, you carry out one of the actions on your card: stealing a type of gem in the space where your character is located, moving any character, asking someone else whether their character can be seen by someone on the board, and others.

Gems come in three types, and when one of the piles is empty, the game ends. Everyone guesses who is which character, then all identities are revealed.

Buy the Suspicion board game now!