↑
Home » Entertainment » What are the Wisps In Disney/Pixar’s BRAVE? 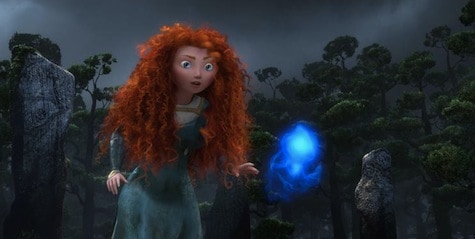 What are the Wisps in Brave?

When the Wisps appeared in Disney/Pixar’s film, Brave, I wondered if they were part of Scotland’s legends and folklore, or if they were something Disney created to make the film a bit more magical.

If you haven’t seen the movie or if you don’t recall exactly what a wisp is, here’s a clip from the film:

As it turns out, I’m not the only one who’s curious about the wisps. I just received this interesting explanation in my inbox:

Travelers—particularly those who venture out after sunset on unfamiliar pathways—beware of the will o’ the wisps.

It is said—though by whom is a bit of a mystery—that on certain days for certain travelers in certain parts of the world, little lights dance on the horizon, whispering tempting invitations… pledging the answers to lifelong questions, the realization of dreams, a key to secret treasures—a change of fate.

Charmed and curious, unsuspecting travelers follow the floating lights, mesmerized by their whispers, their promises. Yet no matter how long or how fervently they follow, they never quite touch the beautiful beacons whose flickering lights eventually fade and disappear… leaving the inquisitors, the dreamers and the treasure seekers lost… and alone.

In “Brave,” Merida spies tiny blue lights after escaping into the forest in search of a change of fate. Forming a path that dares her to follow, the lights lead Merida to a mysterious location that holds the power to change her destiny—just not in the way she imagines.

“The will o’ the wisps are in a lot of Scottish folktales,” says “Brave” director Mark Andrews. “They were said to lead you to treasure or doom—to change your fate—but they’re an actual phenomenon of swamp and bog gas seeping up through the earth and interacting with the natural resources to create the blue flames. People would follow these lights thinking they were little fairies, and basically drown or get sucked down into the bogs.

“We made the wisps like actual little spirits,” Andrews continues. “They’re almost like Marley’s ghost in a way, because Marley’s ghost isn’t an evil spirit—even though he’s frightening, he’s trying to warn Ebenezer to change his ways. That’s what the wisps are doing. There’s a duality to them, because they’re either good or evil—they lead Merida into more and more trouble, but in the end, they’ve led her exactly where she needs to go.”

“The three hardest things for this kind of animation to pull off is moving water, the bustle of clothing, and the movement and texture of hair. Future animators should see this movie. THAT PERM is what ambition looks like.”

You can see my Brave review here!