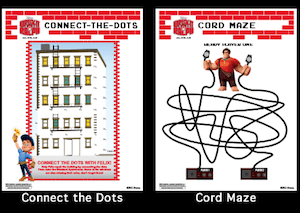 Disney's Wreck-it Ralph opens in theaters TODAY (11/2), and I have more fun activity sheets for your little ones!

There are 3 fun and FREE Disney Wreck-It Ralph activity pages for your little ones, including Wreck-It Ralph connect-the-dots, pencil toppers and more!

The activity pages are available as PDF files in a public Google Docs folder. There are 6 fun PDFs to download.

If you haven't already, you can also download these 3 free Disney Wreck-It Ralph coloring sheets and have a rainy-day activity ready to go!

You can also enter to win “A Hero's Journey” provided by Adventures by Disney in the Wreck-It Ralph Plany & Win sweepstakes!

For decades, Ralph (voice of John C. Reilly) has been overshadowed by Fix-It Felix, Jr. (voice of Jack McBrayer), the good-guy star of their game who always gets to save the day.

Tired of playing the role of a bad guy, Ralph takes matters into his own massive hands and sets off on a journey across the arcade through multiple generations of video games to prove he’s got what it takes to be a hero.

Wreck-It Ralph crashes onto the big screen on November 2, 2012, in Disney Digital 3D™ in select theaters.