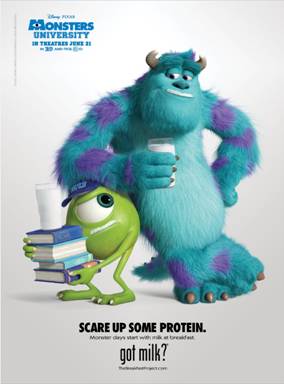 This new Monsters University Milk Mustache ad is too cute to keep to myself! That look on Mike Wazowski's face made my son giggle, and I thought it was pretty funny, too!

At MONSTERS UNIVERSITY, it takes a lot to fuel a day of scaring and nothing scares up successful days more than a breakfast with milk. A glass of milk – with 8 grams of high-quality protein in each 8 oz serving – can help power your monster days!

Stay updated with all the Monsters University news: