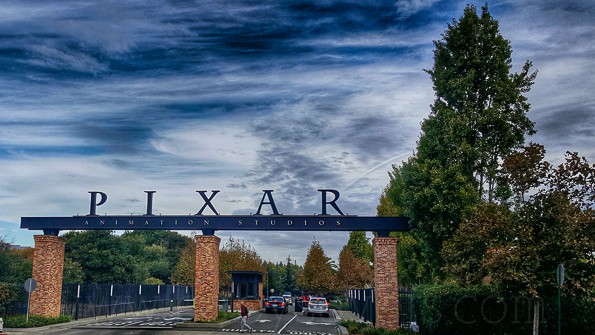 Just a few weeks ago I had an incredible visit to San Francisco for a Disney press trip, and I spent a significant amount of time at Pixar Animation Studios.

After driving through the famous Pixar Animation Studio gates (shown above) and walking to the main courtyard,  someone else from our group posted on Facebook, My inner child just crapped his pants. I know I felt exactly the same way!

I want to take you on a virtual Pixar Animation Studios tour to share what I saw during my amazing visit! 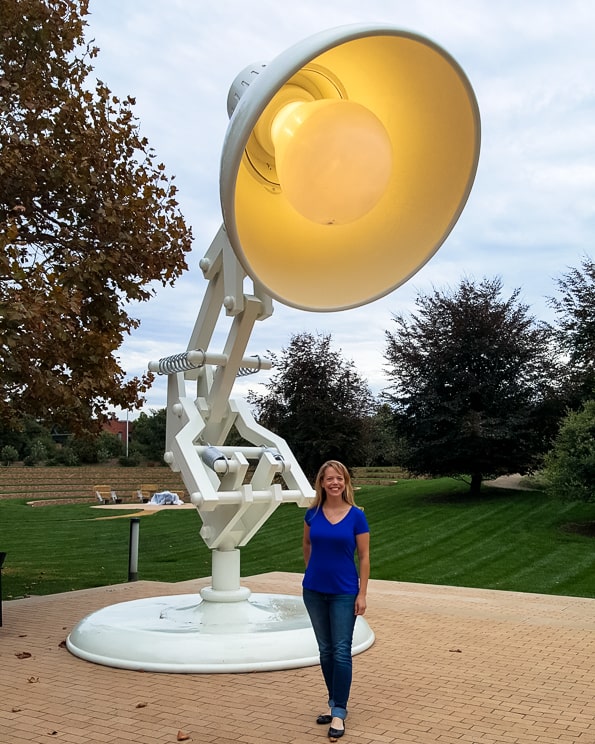 As you walk onto the Pixar Animation Studios campus it’s impossible to miss the giant statue of the famous Pixar light.

Did you know the light’s name is Luxo Jr. and he’s featured in the short film of the same name? 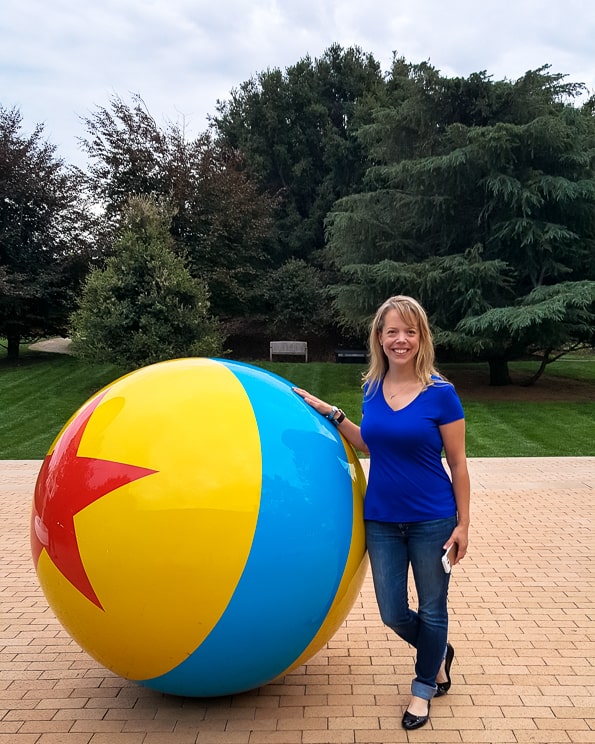 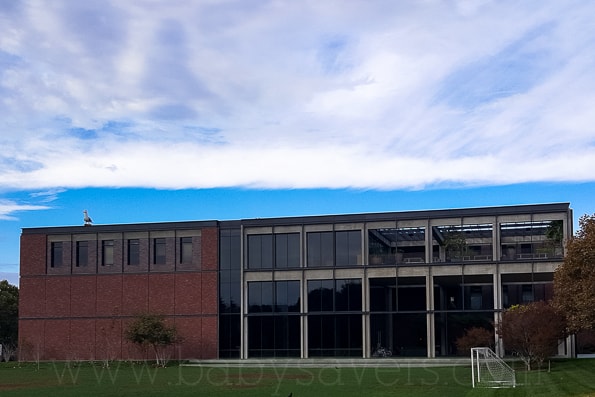 Look off into the distance and you’ll see the Brooklyn building. Notice anything Pixar-related on it? 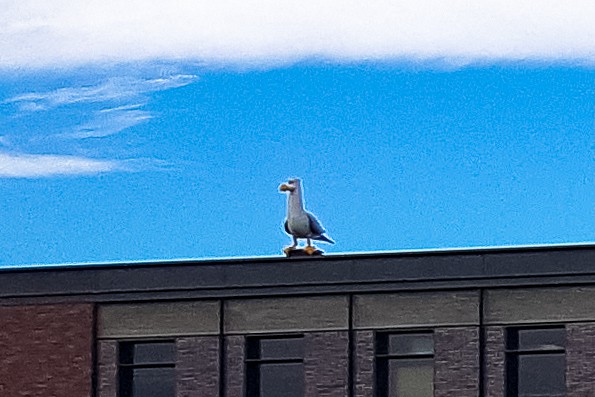 It’s one of those funny seagulls from Finding Nemo! Mine! Mine? Mine! 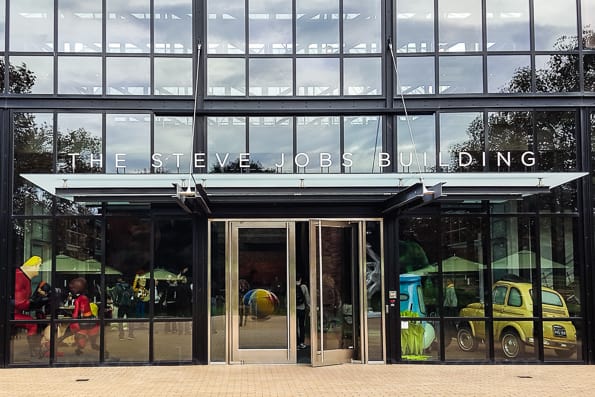 But you’ll really want to go into The Steve Jobs Building and check it out before going over to the Brooklyn Building. 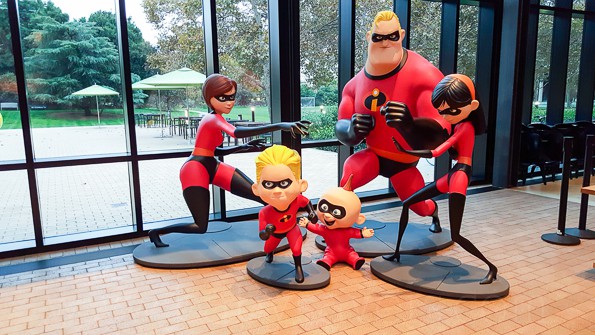 When you walk into the Steve Jobs building you can look to your left and see a, well, incredible statue of the family from The Incredibles. 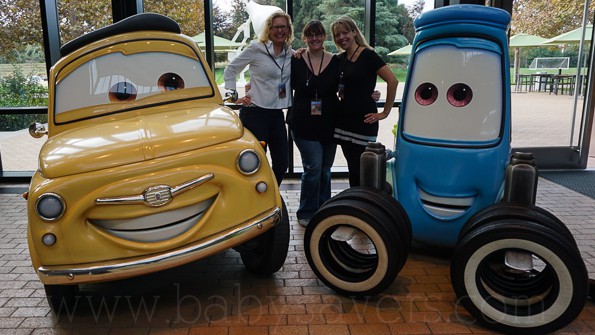 Look to the right and find Luigi and Guido statues from Cars! (That’s me on the right with two of my favorite fellow Minnesota bloggers, Chrysa from Thrifty Jinxy and Ashley from Quirky Inspired.) 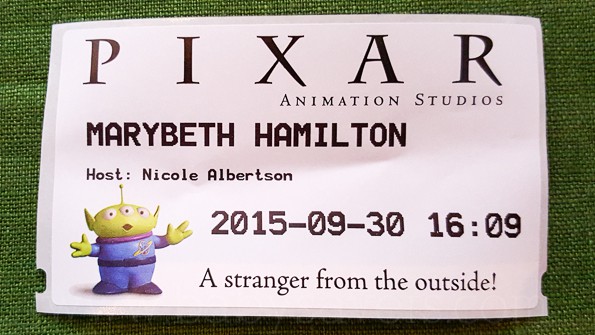 Check in and get your name tag identifying you as a stranger from the outside. 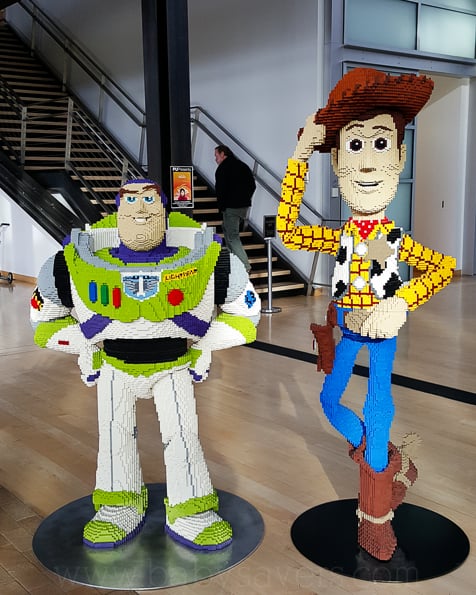 Then stop for a minute and marvel at the life-size statues of Toy Story’s Buzz Lightyear and Woody made entirely out of LEGOs! 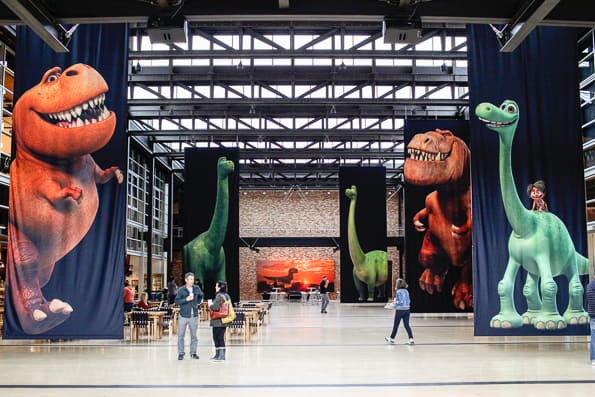 Take a good look at the inside of the building and you’ll find yourself in the Steve Jobs-designed Atrium, a central area designed for open meetings and collaboration.

The main floor of the Steve Jobs building at Pixar Animation Studios is always deocorated with artwork and displays featuring the newest Pixar film. We were told that the Inside Out material had just come down and had been replaced with The Good Dinosaur!

In The Good Dinosaur, Arlo the apatosaurus (sometimes known as a brontosaurus) is 18 feet tall. the banners hanging from the ceiling in the atrium are sized to scale, so the Arlo in the banner above is actually 18 feet tall! 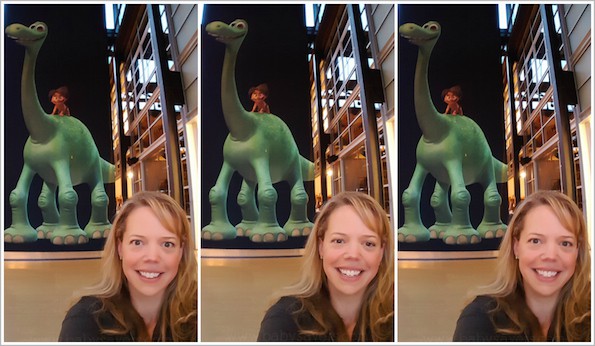 Trying to take a selfie with an 18 foot banner is not easy. 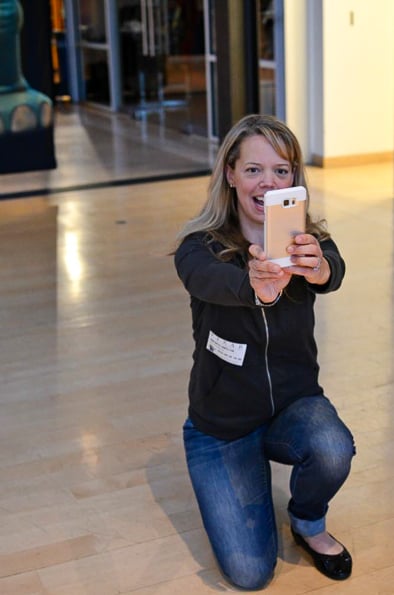 It took so long that another blogger, Dusty (from As Mom Sees It), started laughing and took a picture of me trying to take my own picture (I never got the selfie). 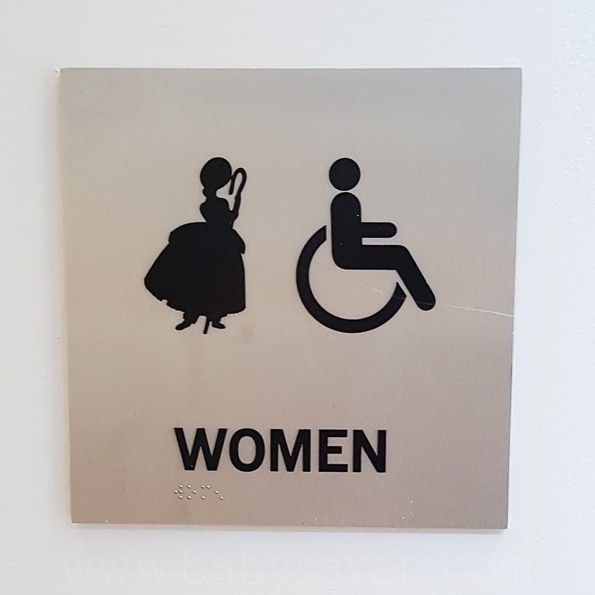 If you need the ladies room just look for Bo Peep from Toy Story! 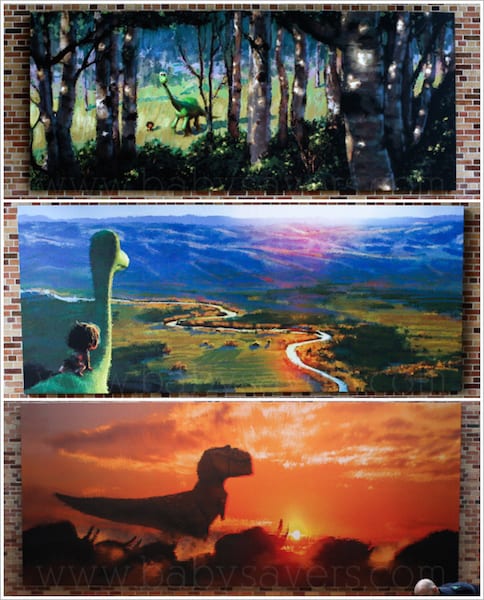 Walk around the ground level of The Steve Jobs Building and see some gorgeous concept art from The Good Dinosaur displayed throughout the floor. 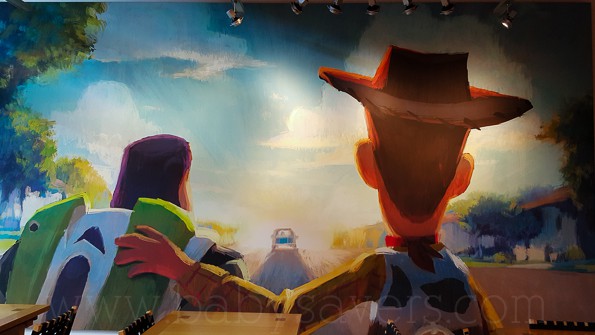 Step into the Luxo Cafe (Pixar’s cafeteria), turn around and be surprised by a piece of gorgeous concept art from Toy Story that covers almost an entire wall! 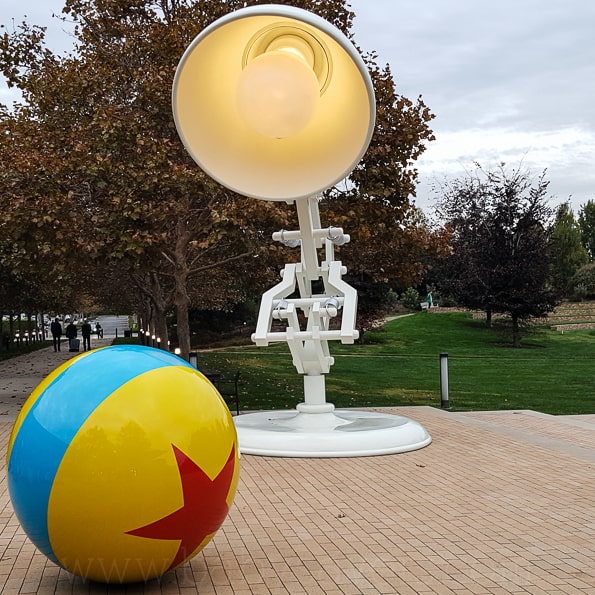 Head back outside, say Hi to Luxo Jr. and the ball once more as you make your way to your second stop on the Pixar Animation Studios Tour: The Brooklyn Building. 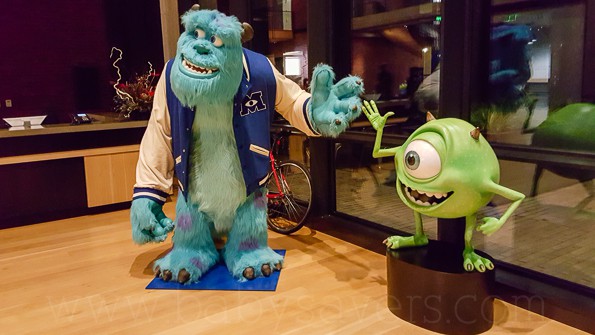 When you walk into the Brooklyn Building at Pixar Animation Studios, you’ll be greeted by these two monsters, Mike Wazowski and Sully straight out of Monsters University. 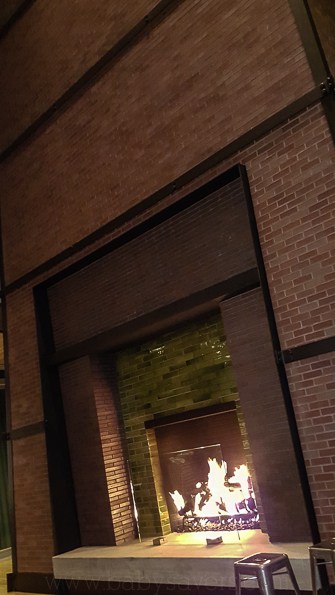 You’ll see a gigantic fireplace in the center of the main level of the building. 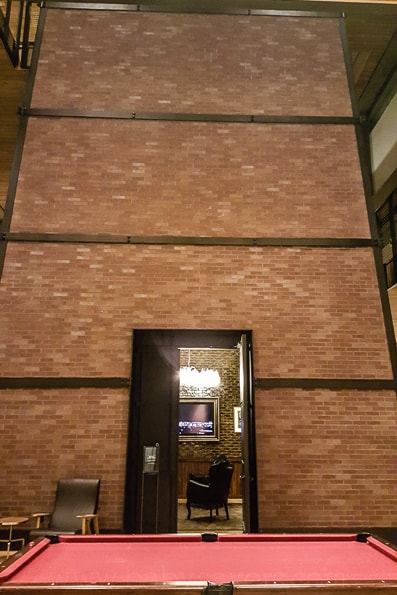 Walk around the back of the fireplace and find the secret fireplace room at Pixar Animation Studios. 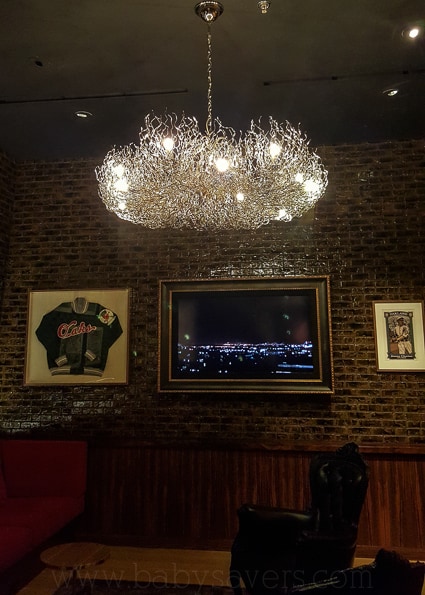 It’s called the Jimmy Claxton Lounge and it’s decorated in baseball memorabilia commemorating the Oakland Oaks. Why? Because the Brooklyn Building was built on the land that previously used to be the Oakland Oaks baseball field. 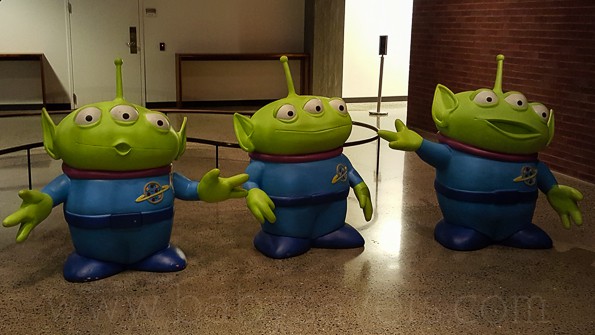 Catch a glimse of these adorable little green aliens from Toy Story as you explore more of the building.

By now, you’ve spent the entire day at Pixar Animation Studios! It’s an amazing place for anyone, but for a Disney and Pixar fan it’s a dream come true! 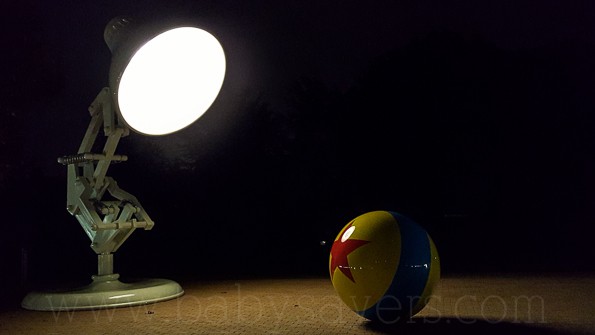 Here’s one more look at Luxo Jr. as he lights up the ball at night.