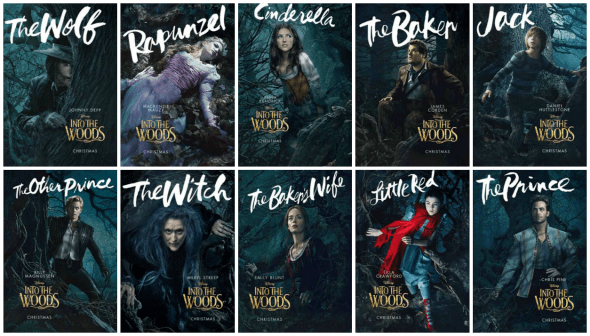 In the very best possible way, I feel like I’ve been living my life in a Disney dream! I’ll be posting about everything Big Hero 6 in the next few days, but I also don’t want you to miss some Into the Woods news!

First, 10 different Into the Woods posters were just made available, and the collage above features all of them.

I stared at each individual poster for a long time when I saw them in my inbox yesterday. I can’t believe the amount of characterization that comes through in each of these posters!

Next, check out this new Into the Woods trailer:

Be sure to check out the Into the Woods trailer, featurette  and poster I’ve been sharing over the past few months!

Into the Woods is rated PG and it’s scheduled to be released in theaters on December 25, 2014!

‘Into the Woods’ is a humorous and heartfelt musical that follows the classic tales of Cinderella, Little Red Riding Hood, Jack and the Beanstalk, and Rapunzel—all tied together by an original story involving a baker and his wife, their wish to begin a family and their interaction with the witch who has put a curse on them.
“Into the Woods” is a modern twist on several of the beloved Brothers Grimm fairy tales, intertwining the plots of a few choice stories and exploring the consequences of the characters’ wishes and quests.