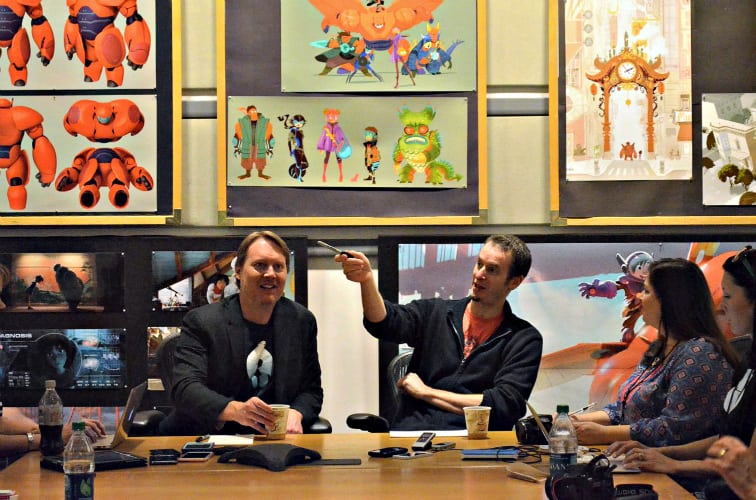 I'm still reeling from my travels to Los Angeles last week for the Big Hero 6 premiere and plenty of other Disney/ABC adventures. But for me, one of the most magical, most bucket-listy things we did on the four-day trip was our visit to the Walt Disney Animation Studios.

We went to the Walt Disney Animation Studios to interview various people involved in Big Hero 6 and learn more about what happens behind-the-scenes for a huge animated Disney film. As a born-and-raised Disney fangirl, I've often wondered exactly where the magic happens and what sort of place that could be.

I wasn't disappointed when I stepped into the animator's room where we were interviewing Don Hall and Chris Williams, the directors of Big Hero 6. The walls were covered in Big Hero 6 concept art showing character development, scenery sketches and a variety of ideas that I can't even explain. This is just a small portion of the room: 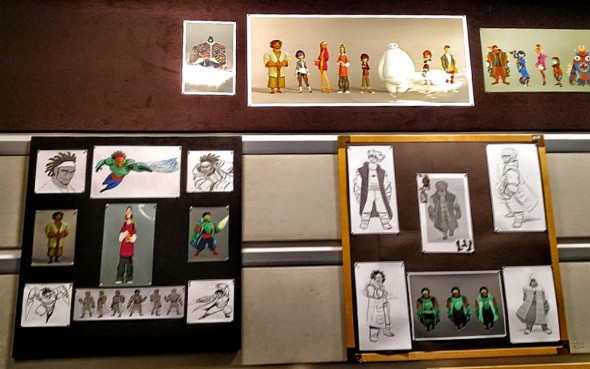 While sitting where the Disney magic happened was an incredible experience in itself, I was thrilled to be interviewing the directors of Big Hero 6 to learn all about how the magic happened! 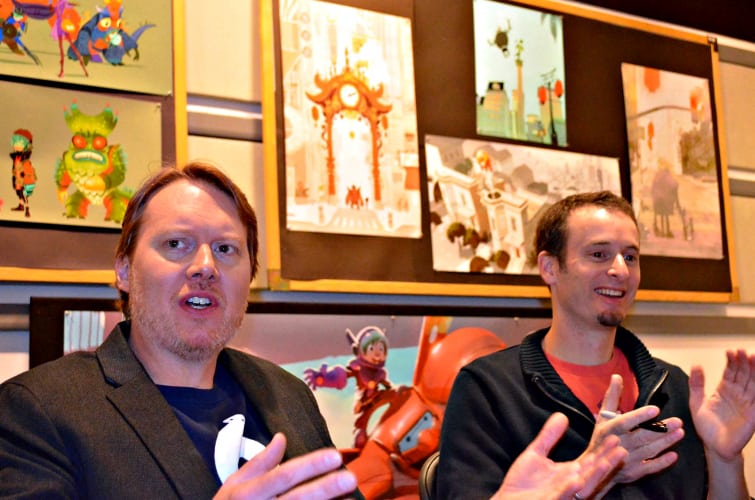 Big Hero 6 is [originally a] small publication in the comic book world. What attracted you to the story of Big Hero 6?

DH: What originally attracted me to Big Hero 6 was just the title. It sounded interesting.

Then I researched it a little bit more and thought the Japanese superhero theme was super-cool. Then I read the books and I was really struck by the characters. They were just so fun and appealing. They had goofy names, like Honey Lemon.

You could also tell the creators loved Japanese pop culture, and that's why they did the book. They wanted to take their love of anime and all things Japanese and infuse that with a Marvel superhero story.

But most of all, we could see amidst all of that there was an emotional story about a 14-year old super genius who loses his big brother and the robot that becomes a surrogate brother and heals him.

CW: Over 3 years ago, Don [Hall] and I did a pitch in this room, on that wall, of Big Hero 6. It was skeletal, like a broad-strokes summary of what it could be.

At that stage, you're not looking at every character, every scene. You just have to show the potential for a fun story. And everyone was really taken with the idea of a kid who was going to lose his brother and who would be left with his brother's robot, a surrogate big brother, to help him move on. that just struck a chord with everybody. So it was my favorite.

I was really glad when John Lasseter green-lit it. The fact that it was an obscure property really helps us, because we'll sit at this table and talk about [the movie we're making] for years. It evolves quite a bit, and we have screenings and the story changes a lot. We know whatever we start out with, it's going to end up being something different.

The fact that Big Hero 6 wasn't a well-known property where people were going to have their own idea of what it should be really helped us.

What was the biggest change from the initial script to the final cut of Big Hero 6?

DH: It may not be the biggest, but one thing that comes to mind is that Baymax became more central. We realized that when Baymax was driving the story and the plot it really helped. So Baymax became a real interesting character in uniting the “boy and his robot” story and the superhero origin story.

CW: I don't know if that's the biggest, but I think it's the most significant. Because up to that point, Hiro was really driving the story. Which makes sense. You'd want the protagonist driving the story, but the story wasn't coming together. It didn't come together until we put Baymax front and center and really put the idea that he wants to heal Hiro at the forefront.

If you look at it, it's a little sneaky, but Baymax is the one that's really kind of pushing the story forward. He's the one who brings the friends in, and he's the one that furthers the flight because it's making Hiro feel good and forget the loss of his brother for a little bit. Once we did that, the story really started.

DH: I would also say the specific thing that changed is the scene on the wind turbine after that first flight scene. That was a very late addition, but that' the way we work. We keep questioning our assumptions and challenging the story. And we realized there was something missing.

We added that scene and it really solidified the relationship, and we understood how much Baymax and Hiro were invested, how much they loved each other. I think that's a credit to the way we make movies here, how we allow ourselves to constantly reassess. I was really proud of that scene.

The scenery in Big Hero 6 is really exciting and mesmerizing, and there's so much to see. How did you go about researching what the actual backgrounds would be, and how much attention you wanted to draw to the backgrounds?

CW: We put a stake in the ground very early on, saying we're going to push the lighting. We want this to have a very cinematic look. That was by design. So we had some rules that governed our art direction: Simple characters on a complex background.

There's more detail in this movie than in the last three movies, I think. that's a credit to our production designer, Paul Felix, and our art director, Scott Watanabe, who really shared the burden of how to integrate the Japanese stuff into San Francisco.

Not only that, we had to make it seem like a lived-in, real place. Not a soundstage or a CG-ish environment.

DH: We have an incredible production designer and art director. They really go to these places, the immerse themselves, they sketch. They take pictures, they study. That's how you get all of the details that add up so it feels realized, so that it feels really complete.

These guys go really deep. Even the placement of the sun in the sky; the sun will always be in the right place in the sky, depending on the time of day in the scene and the geography of San Francisco.

Instead of making the setting completely fantasy or completely real, how did you come up with the combination of Tokyo and San Francisco?

CW: It happened very early, because that's the first thing we generally tackle. Before we ever go into story, it's always the world first.

In our second meeting with Marvel, we talked about this. [Marvel] said, “You don't have to worry about setting this in the Marvel Universe. Don't worry about trying to integrate Captain America and Iron Man. Just take this and go. Make your own world.”

That was very freeing, but it left a  lot of questions. What is the world? How were we going to integrate a Japanese stamp. San Francisco just felt cool because it's very recognizable.

It's a contained city. It's a beautiful city, and there are so many things people recognize. Like the Golden Gate Bridge, cable cars and the topography. It just felt like we could make a grounded, relatable world but still have the fantasy that we do in animation.

DH: Something John [Lasseter] emphasizes a lot is that the story is going to change a lot, but you're going to live with the world you create. Before we created the story, we did a lot of research just to build the world. We let the world inform the story. 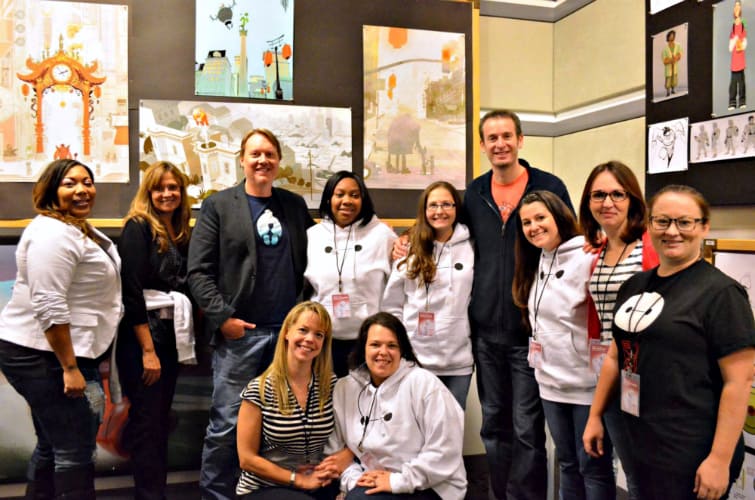 Disney's Big Hero 6 is showing in theaters everywhere! Get your tickets today!