I admit it, for as much as I love Disney and Pixar and animation in general, I was under a huge misconception when it comes to how these movies are made.

See, I thought one or more artists came up with a good story and sketched out some ideas. I thought a lot of work was done by animators sitting at desks that culminated in a beautiful, memorable movie.

It turns out that I was so wrong about so many details about what happens in between the idea and the actual movie. I have a big post planned to share the various aspects of how Pixar makes a movie like The Good Dinosaur, but today I’m going to focus one one thing:

How Peter Sohn and his Pixar team researched The Good Dinosaur in the USA’s Pacific Northwest.

There’s no doubt that the artists working on an animated movie drew inspiration from real life settings, but I had no idea animators even went on research trips. I thought they built scenery and landscapes in their minds then brought them to life. I was so wrong!

I learned all of this when I went to Pixar Animation Studios one night in September to hear the filmmakers from The Good Dinosaur talk about their travels to the Pacific Northwest to gather information and ideas for the movie. 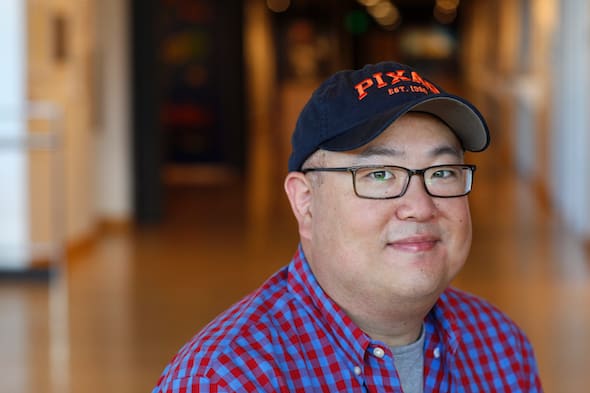 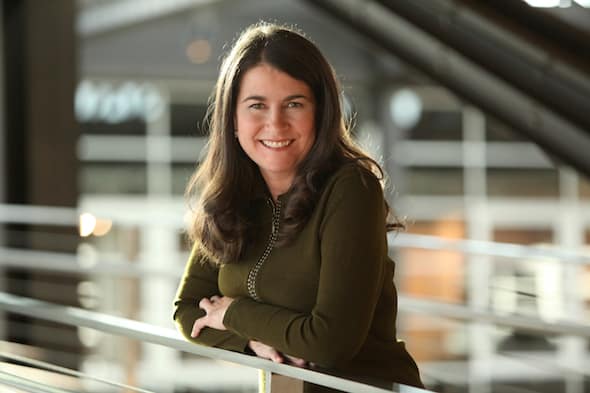 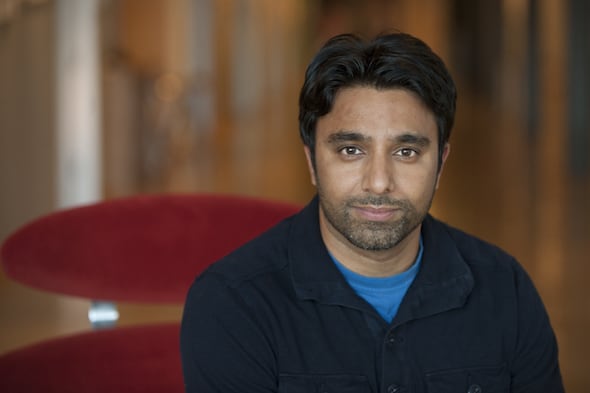 First: Surreal. That’s the only way I can describe what it was like to walk into The Brooklyn Building, see a fire blazing in the gigantic Pixar fireplace and realize the scene was set to learn all about how a location in the United States provided so much inspiration (and real data!) for Pixar’s The Good Dinosaur. 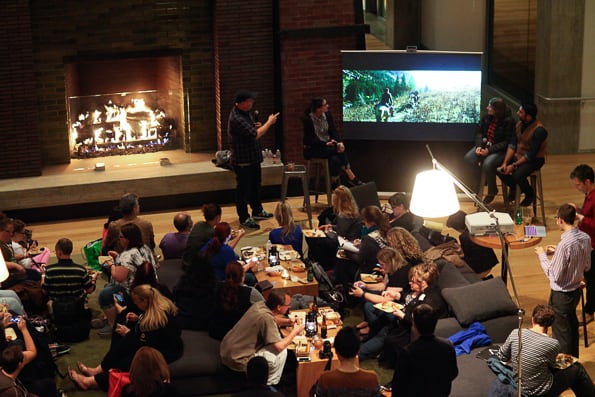 How The Pacific Northwest was chosen as the location inspiration for The Good Dinosaur:

Peter Sohn, the director of The Good Dinosaur, explained how he and his team connected the film to the Pacific Northwest:

When we first started this project it started with a farm dinosaur. That became a family and we found Arlo soon after that. But we didn’t know where to set this sincere farm family.

Sharon Callahan [Light and Photography Director] was born in Washington and lived in Oregon. She’s a fabulous painter. She did paintings all along the Snake River. Our movie really does take place along the river; it’s like our Yellow Brick Road. The river would become a main piece of our story, and we needed to do research on it.

Making stories is really difficult and [making The Good Dinosaur] put me in a crazy place. Denise [Ream] just said, “Let’s go out there and get lost. Let’s start researching and get reenergized. That was one of the first fantastic kicks into this movie. 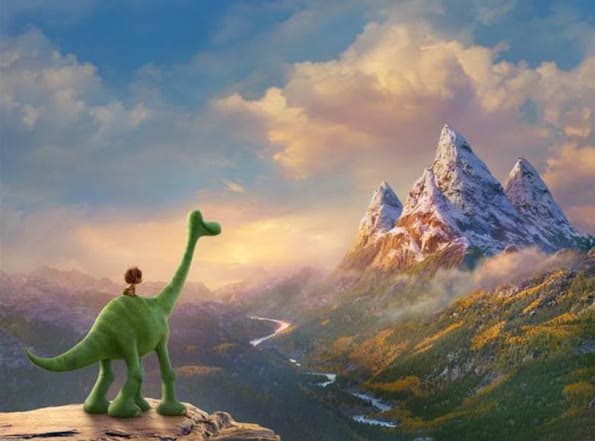 Sohn then said that he had grown up in New York, and he had never been to a location like the Tea Times Mountains.

It was so soul-enriching. Everything is so large it makes you feel tiny. You start to have a weird feeling of growth where you get very inward. 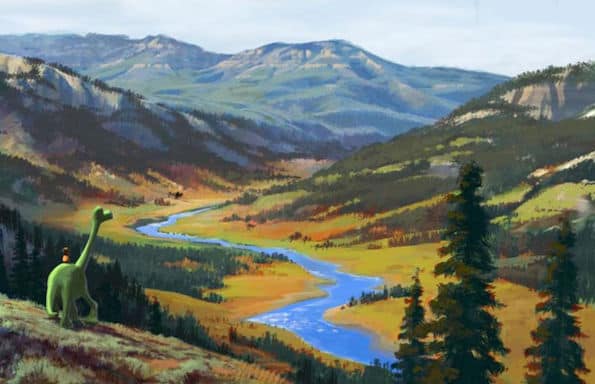 The thing that was incredible was the vastness. Pete kept wanting to know what was going to be around every corner. It felt like, even a dinosaur would feel tiny out here. It was overwhelming. 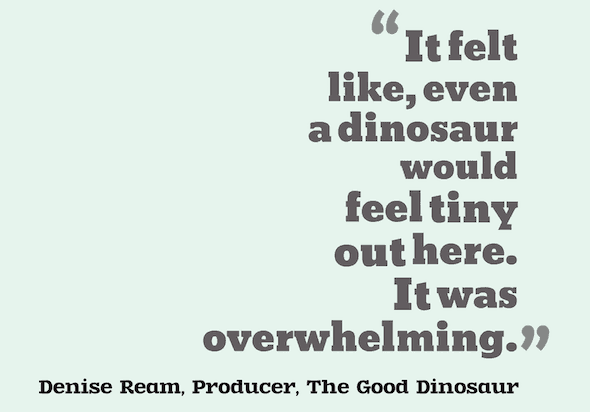 In terms of production design, Peter Sohn explained the landscape:

The Wyoming side of the Tea Times is literally flatland up against a wall. A Giant wall of mountains. The higher side is looks like you just took your rug and shoved it up against that wall. There are just crazy angulations everywhere.

They also talked about one of their guides, Ramsey. Not coincidentally, The T-Rex named Ramsey in The Good Dinosaur is inspired by this guide!

Ramsey (left) and Nash (right) in The Good Dinosaur

Peter Sohn on Ramsey and how she inspired the character:

Ramsey was legitimately a cowgirl. It was just her, her horse, her dog, a saw and a gun. She went on four to six month trips by herself with her dog.

Everywhere we’d go she would look to her horse’s ears and her dog for signals. I grew up with a dog, but inside an apartment. I guess my dog wasn’t really a dog! What I had was a piece of furniture, because what she had was a real dog as wild and free as could be.

We would be gone for hours, walking along. That dog would zip right to her, make a little eye contact and zip off somewhere else. We wouldn’t see the dog until 15 minutes later. Then Ramsey would have this quiet, non-dialogue communication with her animals.

As Peter Sohn said earlier, the river became a character in the story. 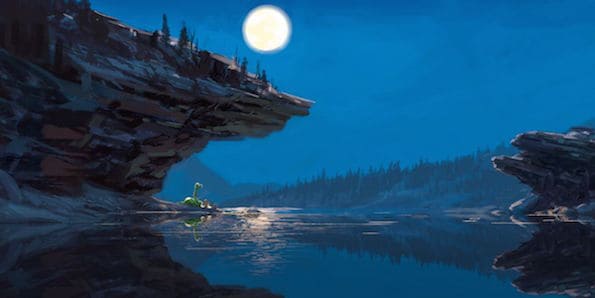 Getting up close and rafting on the Snake River gave them real insight on how to incorporate a river’s characteristics into the animation.

We went on this trip down the river just to feel the color of it.

In the film when Arlo is feeling terrible the river is boiling and becomes wild. When Arlo is at peace the river can become like glass.

We needed to learn and understand what river rocks can do. We needed to understand how light bounces off the water. The science and beauty of it is amazing.

The team also learned so much from their guides about the terrain. Not just how it looked but what you could learn from the land.

In one instance, Sanjay [Bakshi] lost a GoPro camera in the river that had valuable footage on it. After looking in the water for a bit, the team was like, We’re never going to find it. Where can we get a replacement GoPro?  They continued their trip down the river when one of the guides stopped. Sohn describes the experience:

We went down about a hundred yards and Derek, our guide, was looking around. He was just looking at the river.

He literally got up under the boat, in the middle of the river and came up with the GoPro! We all wanted to know, HOW DID YOU DO THAT?

Derek explained to them:

You have to learn to read the land in the water.

There’s a little mound in the river over there. You can see the rocks. If you understand water, you’ll know that water will go faster in certain parts of the river. I took a guess that the weight of the camera and figured it would only go until it hits some sort of bank.

You have to understand and respect the land and the nature around here.

Sohn explained how we talk about nature and how beautiful it is. Derek the guide would point out things like,

Rain has destroyed that area. You don’t want to camp there. Look at the rocks around you, this is where landslides happen.

To sum it up, Sohn describes the guides:

They were like these gods of the earth that could understand it so well. 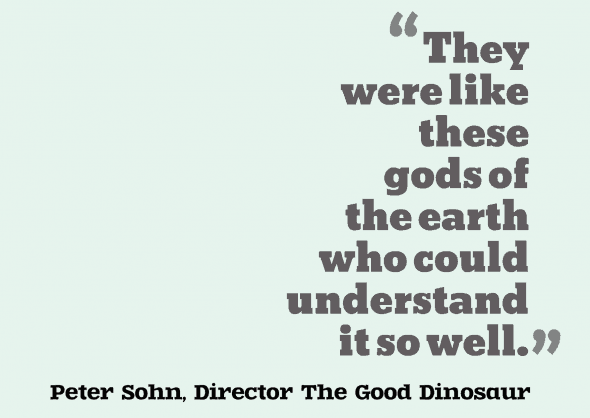 I’m amazed, absolutely amazed at how much real experience and real locations inspired both the story and the setting of The Good Dinosaur!

That was just the start of my schooling on how animated films are made, and I have so much more to share! Every step of the filmmaking process was eye-opening to me, and I have fascinating information to share about how The Good Dinosaur was made. Stay tuned!