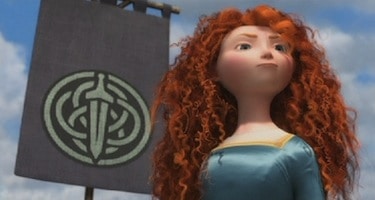 Super fans of Disney/Pixar movies have discovered the excitement of scouring the screen in search of the Hidden Gems the filmmakers sneak into each feature film:

WALL-E’s explorations and adventures turn up a Mike Wazowski (of Monsters, Inc.) car antenna ball, and the telltale Luxo Jr. ball can be seen in a child’s room as Carl Fredricksen’s balloon-lifted home sails past her bedroom window in Up.

Disney/Pixar’s brand new, epic action adventure movie,  Brave features more than a few hidden gems. I have the inside scoop on 2 of them, but there are plenty of others if you look hard enough!

Here are two hidden gems that Disney is publicly talking about:

The Witch, an eccentric crone disguised as a woodcarver specializing in whittling wooden bear figurines and conjuring haphazard spells, showcases her mysterious and inexplicable knowledge of the future with a carved figurine of the infamous Pizza Planet truck, an iconic delivery vehicle that’s appeared in nearly every full-length feature film from Pixar Animation Studios since 1995’s Toy Story.

A carving of Sulley, the lovable blue monster slated to return to the big screen in 2013’s Monsters University, appears on a piece of wood in the home of the Witch.

I think I have zero attention to detail. I saw Brave once, then learned about where a few of the hidden gems were before I screened  it a second time. I have to say, I didn’t see either of these (or any other ones!) the second time I watched it, and I knew exactly when and where to look!

Oh, well, there’s always a 3rd time to look for them, since I’m definitely going to see Brave again soon! You can see my Brave review here!