↑
Home » Entertainment » An Interview with Suzanne Todd, Producer of ALICE THROUGH THE LOOKING GLASS 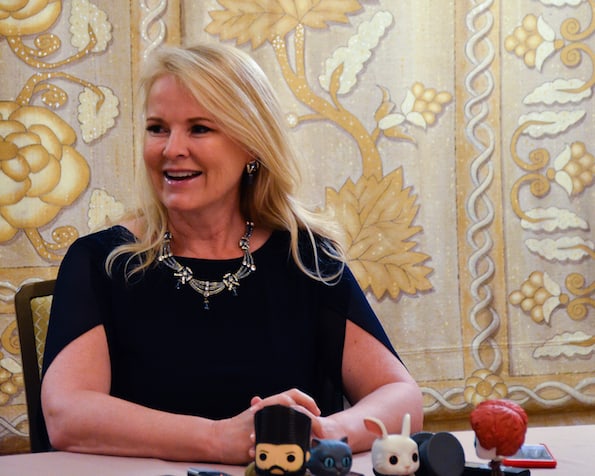 Every once in a while, this blog gives me amazing opportunities to meet and interview successful women who provide so much inspiration to the rest of the world.

It was just a week ago that I had the chance to sit down with Suzanne Todd, the producer of Alice Through the Looking Glass to talk about the movie, Hollywood, parenting, sexism, feminism, and so much more!

Interviewing Suzanne Todd, Producer of Alice Through the Looking Glass

There are a lot of great themes of family and time in Alice Through the Looking Glass and Alice is such a great heroine. What part of this movie are you most passionate about?

It was very, very difficult to craft the sequel. We never intended to make  a sequel. We didn’t rush to make it just to cash in on the financial success of the first one. We wanted to be really thoughtful about it. 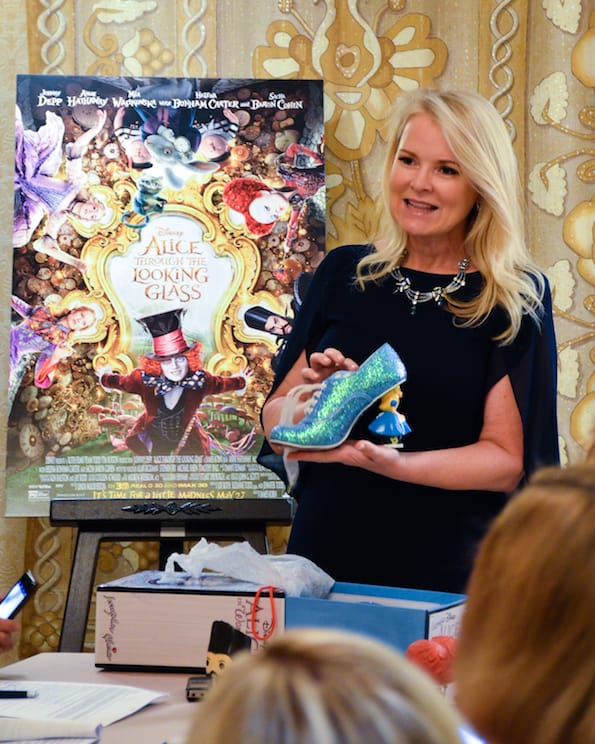 I have a mother, I have three kids. You guys here are working triple duty as all moms do. I feel like the older I get, the more precious I find my time is to me.

As a single mom, how are you making all this work?

I’ve been divorced for seven years and I have my kids 100% of the time. I found over the years that it’s important to have time for the three of them together with me, family time, but also to have individual time with them.

But my schedule is always crazy. I use Google calendar and everybody has a color. I always joke and say it’s like a war operation of moving people around.

I have to say, when we were shooting in London, it was so far away that  I just picked them up and and they came with me for the whole time. We were so spoiled. They were my prisoners, you know? [laughs] We would wake up in the morning and we would all go to the studio together.

I’d take the crew call in the morning and they each had a classroom where they would go and do their schoolwork with a tutor, then we’d have lunch together.

By the time we wrapped we’d have dinner and watch dailies and go home. They were in my clutches! They weren’t going off with their friends of going to their softball games, so that was super fun for me. [laughs]

Was Alice Through the Looking Glass easier or tougher than the first one?

I think harder because the response to the first film was unexpected and overwhelming. 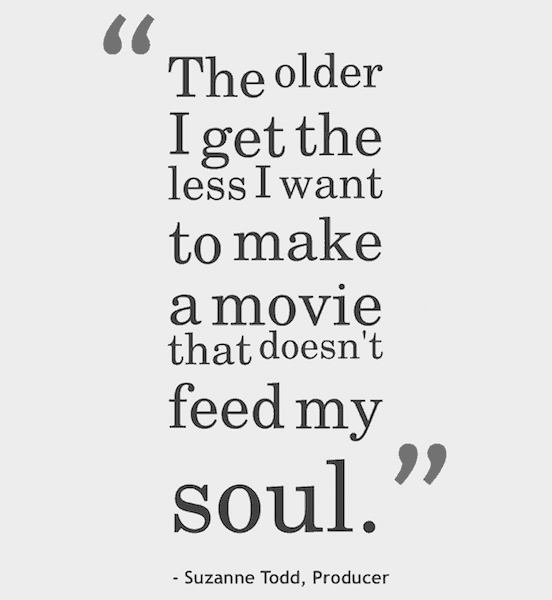 The older I get, the less I want to ever do a movie that doesn’t feed my soul.

We also built big sets for the Alice Through the Looking Glass, and getting the cast together was much harder because they’ve all continued to have flourishing careers. They’ve done so many amazing things and Johnny [Depp] is always booked. He’s always working.

On the first movie, Tim Burton was the really interesting thing about the casting process. Normally when you’re casting a movie you go through the script and you make lists of the characters and there are about 20 actors and you go one by one and offer it to them.

You go to Brad Pitt and say, “Brad Pitt, do you want to do this movie?” He says no, so you do to George Clooney. You work your way through the process.

On the first Alice, Tim literally just picked the people he wanted and called them. And every single person said yes. Everybody wanted to do it because they just wanted to work with Tim and they loved the script. The second time, we knew who most of the actors were going to be, but scheduling was difficult.

It took us almost another year to really get started, to get all the actors when they could work at the same time. It’s like a very complicated jigsaw puzzle.

You mentioned you never thought about a sequel when you were making Alice in Wonderland. When was that day or moment when you said, we’re going to do a sequel?

We all took a moment to breathe and relax after finishing the first movie. Then we went back and read the books again and re-read the poems. We read a couple of other books on feminism and raising girls and the emotional life of girls. It started to gel for [writer] Linda Woolverton.

Do you have a special message for single moms who are in pursuit of careers that they love?

I’m learning every day just like the rest of you. I know it sounds like an Instagram saying, but I definitely sweat the small stuff less. Maybe that’s just because I don’t have time for it, or the energy for it, but I really avoid people, situations and things that bring drama and conflict and aren’t productive to moving things forward.

That’s very different than I was 10 of 15 years ago. I’m very focused on what I think will be a positive outcome, and it’s something I actually talk about a lot with my kids. 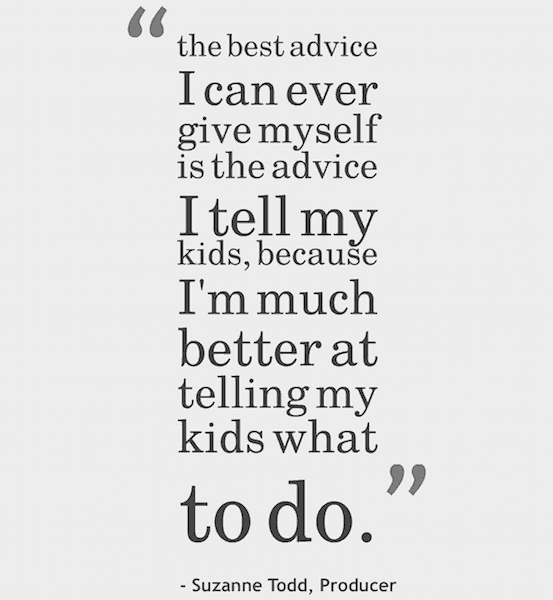 I always think the best advice I can ever give myself is the advice I tell my kids, because I’m much better at telling my kids what to do than I am at telling myself. If I pause and think about what I would tell them, I usually do a better job.

Try to avoid the stuff that isn’t helping you get to where you need to go, including sometimes your own thought process. Having negative thoughts or telling yourself that something is harder than it really is…it’s not helping you.

Do you have fun stories from filming Alice Through the Looking Glass?

Sacha [Baron Cohen] talked about how the costume is important to him. The one thing he really, really wanted to do was wear tights. I thought it was so funny and I didn’t understand it, but I went to the first costume fitting and I saw him and I was like, of course, because his legs are ridiculous. His thigh is the same size as his ankle, which you can see in the movie.

I love that Sacha understood the ridiculousness, the skinniness of his legs, and that’s why he wanted the tights.

Also, under that big hat Sacha has a man bun.

Earlier you mentioned feminism. In Alice Through the Looking Glass there was a section where he said “[It’s] no job for a girl” Have you ever had to deal with that in your life?

Do you mean yet today, because for sure it happened yesterday. Do you mean like everyday?

It’s just part of working in Hollywood. Unfortunately, you look at these dismal numbers of female directors and female producers. I’ve been doing it for 30 years and it hasn’t really changed very much. It is very difficult.

I’d like to lie and say that it’s not true, but it is. It’s harder as a woman. 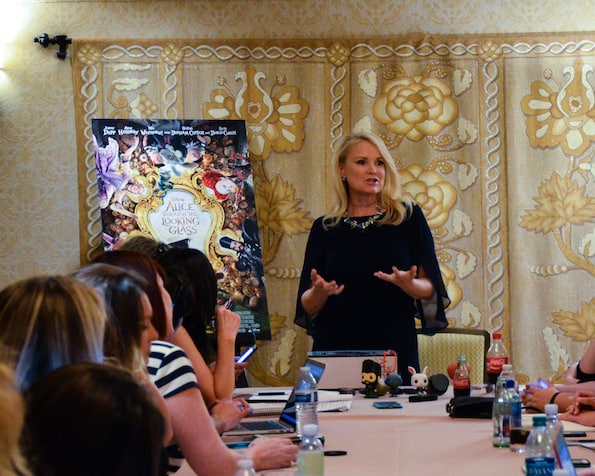 Do you work with other females in the industry to help them succeed?

I really do appreciate the mentorship. I usually tell them mistakes that I made more so than wisdom that I can pass along, because you can learn from other people’s mistakes. 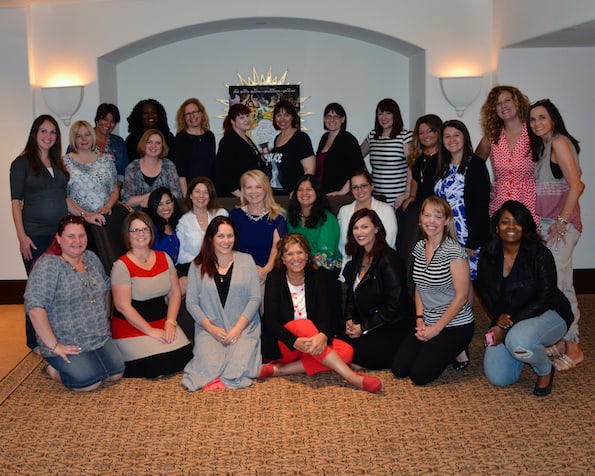 Go see Alice Through the Looking Glass and see the magic Suzanne Todd has created!

Watch the official trailer for Alice Through the Looking Glass now:

Follow Disney’s Alice Through the Looking Glass on these social media pages:

Disney’s Alice Through the Looking Glass is now in theaters everywhere. Get your tickets today!

Disclosure: Disney flew me to Los Angeles to participate in this and other events. Most expenses were paid by Disney. All opinions are my own.