↑
Home » Reviews » Affresh Tablets :: How to Make Your Garbage Disposal Not Smell 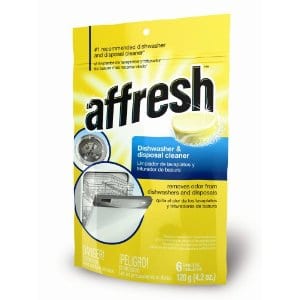 Before I was a homeowner, I longed for a sweet apartment that came complete with a washing machine, dishwasher and garbage disposal.

I’m the keeper of the kitchen in our home, but I had never lived anywhere with a garbage disposal. I figured that all food waste could go down the drain, and the disposal would, well dispose of it.

A few weeks into that operation, I walked into my kitchen and realized I’d have to play my least favorite game: Find the Smell. Believe it or not, my kitchen is relatively clean, so I couldn’t figure out where the rotting, horrible odor was coming from. After taking out the garbage and inspecting all of our major appliances, I realized that the smell was coming from the drain. It was then that I realized that there was likely some raw chicken stuck in the disposal from a few days earlier. As Minnesota Moms say: ICK!

I didn’t know how to make my garbage disposal stop smelling, but I do know that running hot, soapy water through the disposal only made a hot, steamy stink. I was super-close to pouring bleach down the drain, but my husband stopped me before any permanent damage was done! A Google search finally told me to pour in baking soda, followed by vinegar. Then I had to let it sit for an our. Then I had to follow it with boiling water. Then I had to throw in some fresh citrus peels to cover up any remaining odors. Hours later, the smell was (mostly) gone, I was done putting meat in the disposal forever, and I was hoping to uncover a better way get smells out of my garbage disposal!

The entire population of people who own garbage disposals should rejoice that Whirlpool now makes a product called Affresh, which is made to clean your garbage disposal and dishwasher!

When I received my package of Affresh, I didn’t think my garbage disposal really needed to be cleaned. However, the information I received with the package told me that residue that builds up in my garbage disposal can cause odors. Of course, I had to see it to believe it, so I took the trap out of the drain and peered down into the disposal basket. Residue was right! I never realized that there could be so much buildup in a space that regularly has soapy water running through it!

Using the Affresh tablets to make your garbage disposal not smell: One thing is for sure; while using the Affresh tablets requires about 30 minutes of not using the sink, it’s a lot faster than the process I was using before! All I had to do was drop in a tablet, turn on the disposal, and run hot water through it for 15 seconds. After that, I just turned off the water and the garbage disposal, then waited 30 minutes. A quick flush of hot water down the drain was all that was needed to complete the process.

I’m “test driving” Affresh tablets, so I’ll be monitoring my disposal to see if it operates better now that it’s fresh and clean!

Where Can I Buy Affresh Dishwasher & Disposal Cleaner Tablets?

Affresh is avaialble at retailers nationwide, including Sears, Best Buy, Lowe’s, Kroger and Food Lion, and at www.affresh.com. A pack of 6 tablets has a suggested retail price of $6.99.

I wrote this review while participating in a campaign by Mom Central Consulting on behalf of Affresh and received product samples and a promotional item to thank me for taking the time to participate.