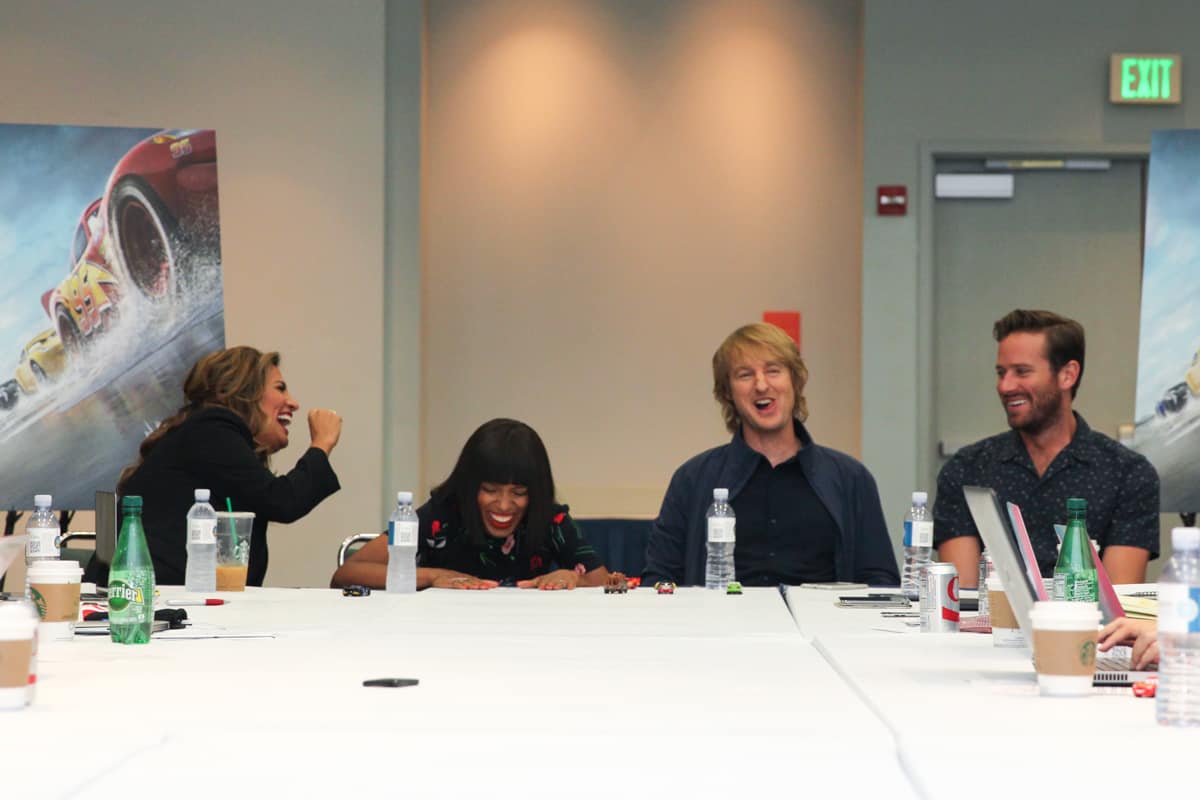 Last weekend I had the crazy realization that I, a small-town mom blogger from Minnesota, was going to be interviewing four voice actors from Cars 3. Not just any actors. I was about to interview Owen Wilson, Kerry Washington, Cristela Alonzo and Armie Hammer.

I thought I knew how at least some of the interview would go. Cristela would be hilarious, Owen would be chill, Kerry would be reserved and Armie would be down-to-earth. 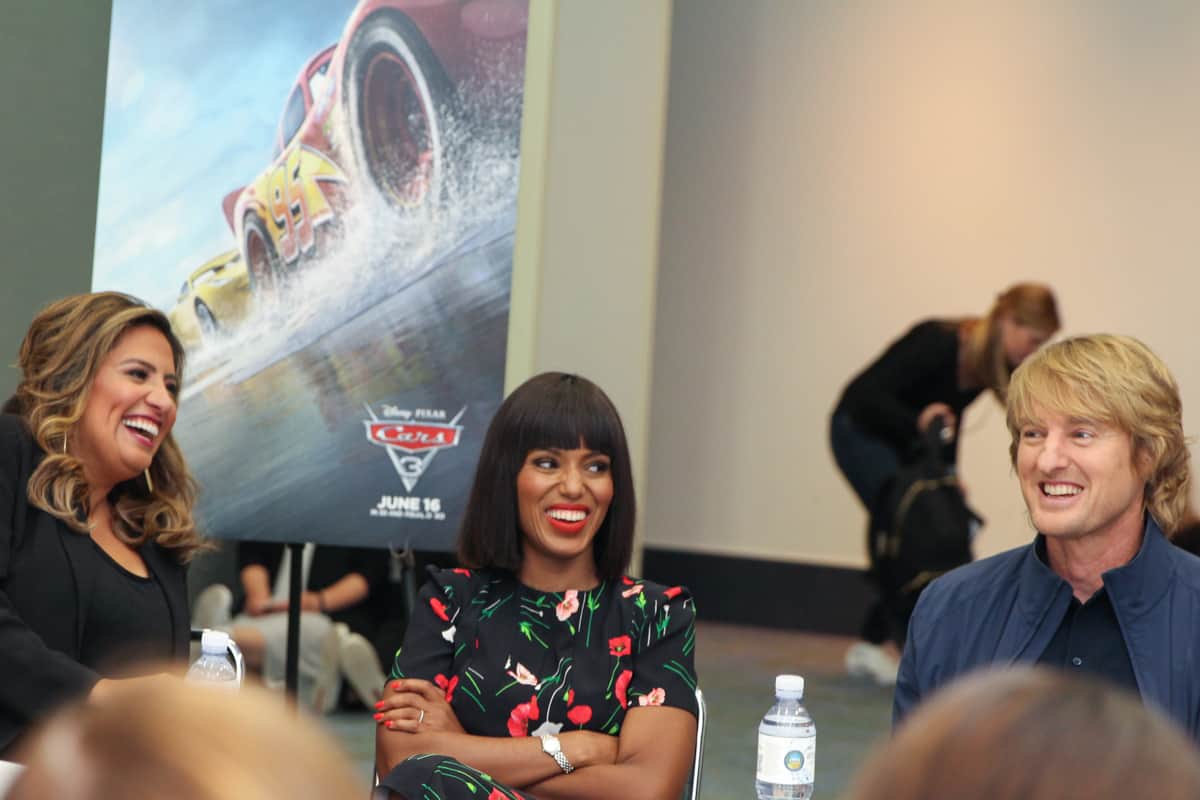 As you can probably see from the pictures, I was wrong to so quickly categorize each of them, and I left with the knowledge that all four of them were incredibly entertaining in their own individual way.

Further, their true personalities made the characters they voiced in Cars 3 so unique and personalized, there's no way I can even imagine other than these four voicing their characters!

To recap, here are the characters each of them voices in Cars 3: 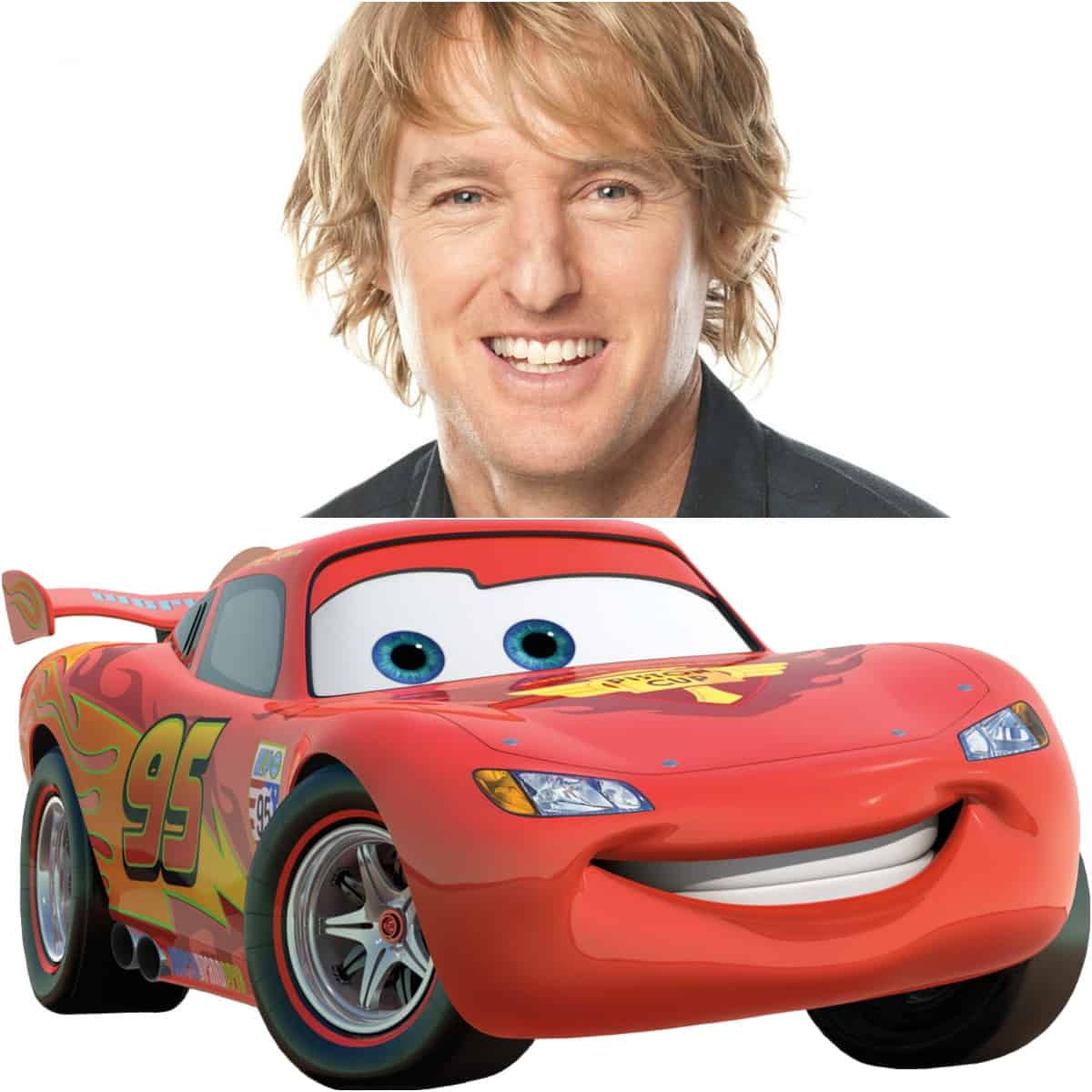 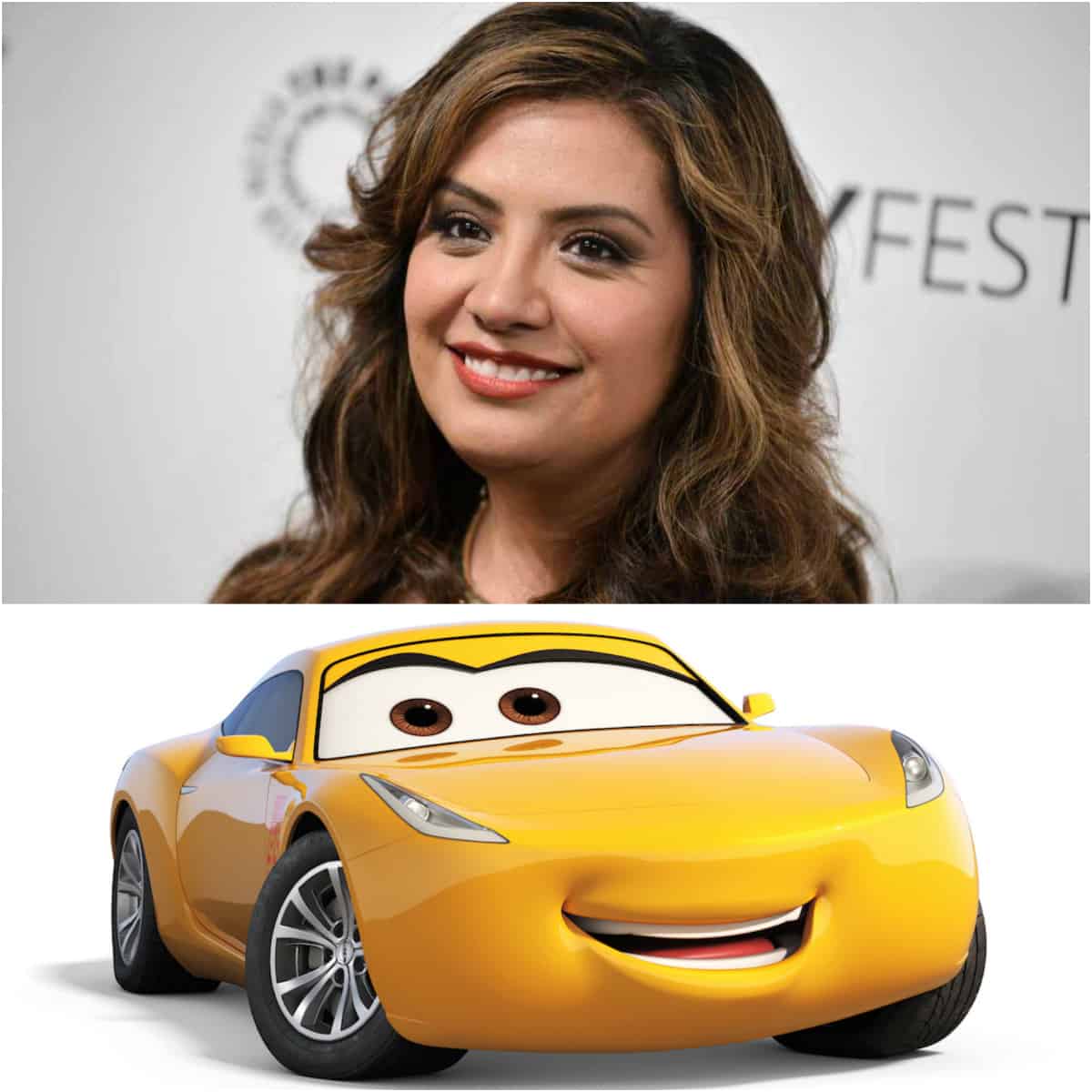 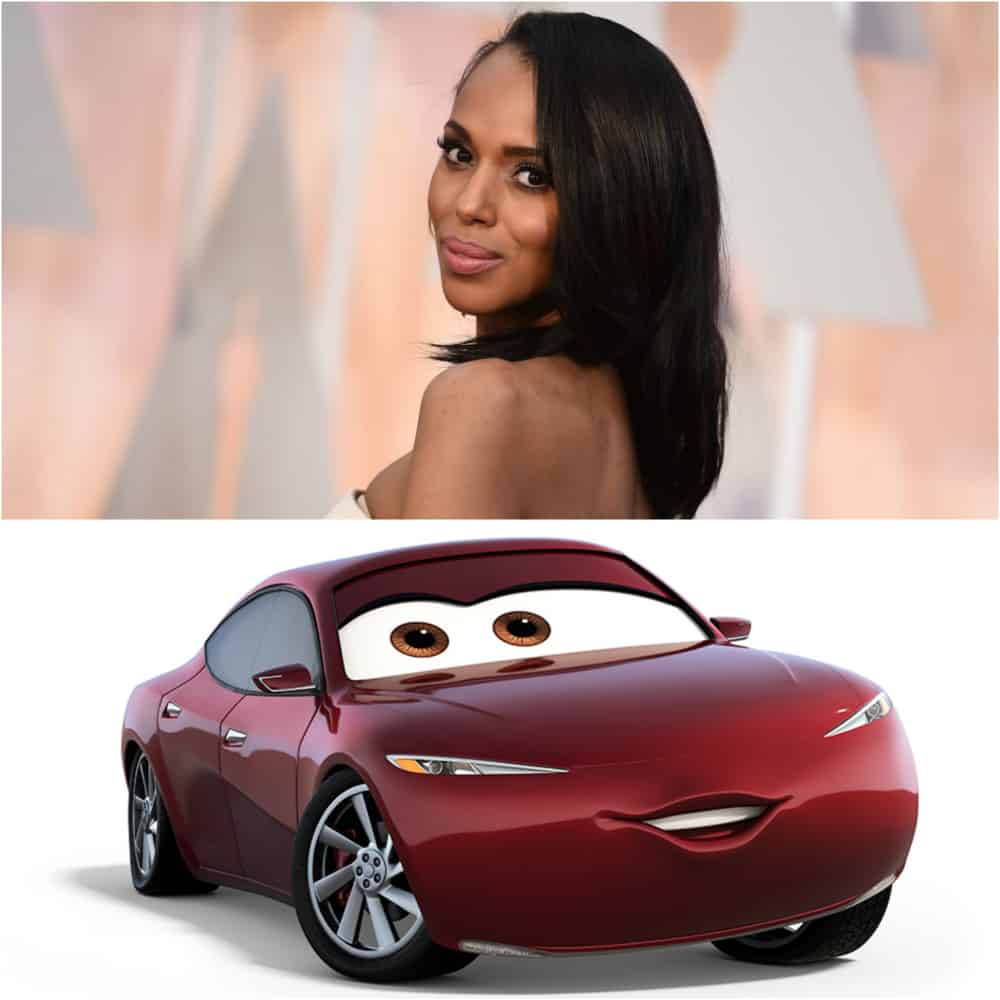 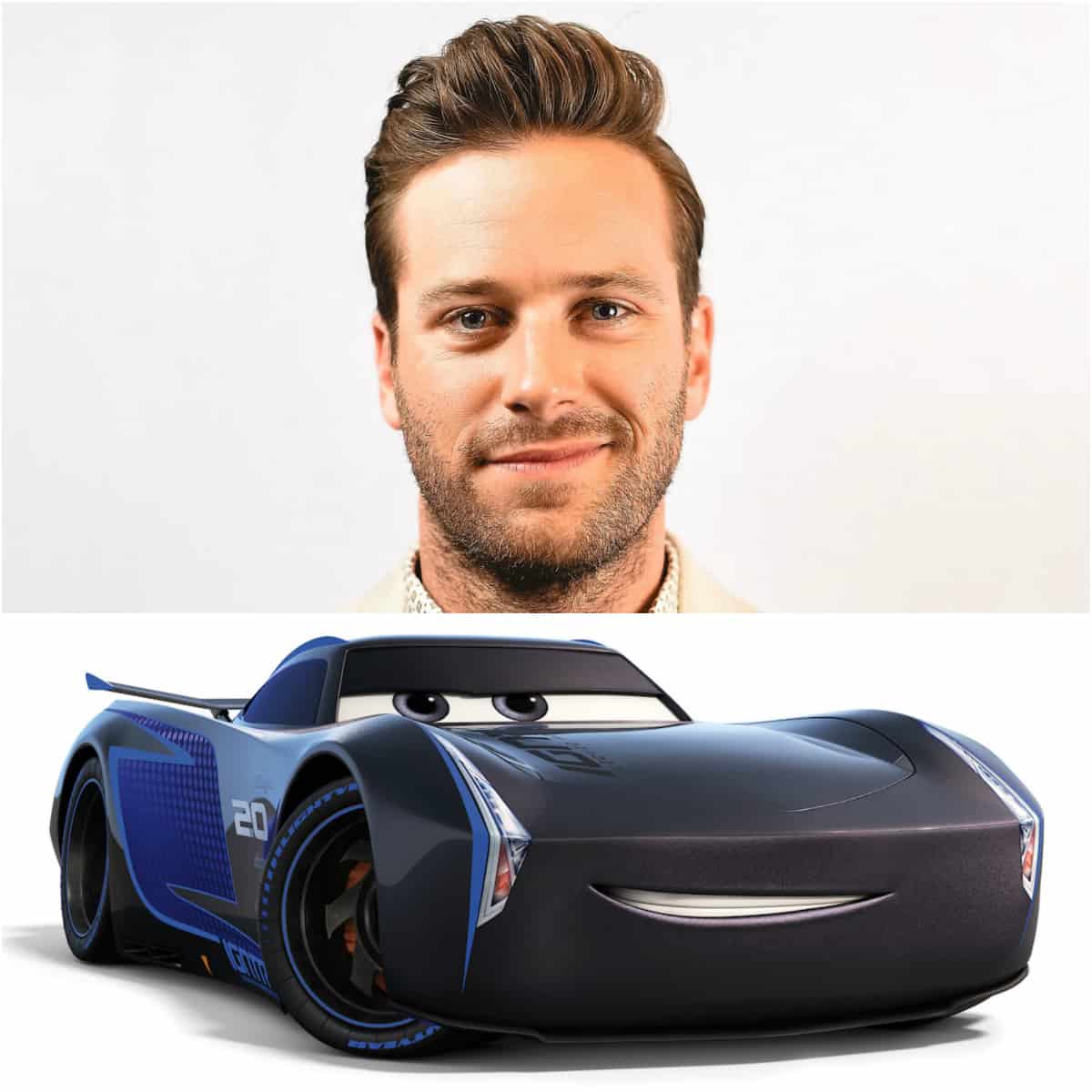 Cristela Alonzo had our entire group of 25 bloggers laughing before she even sat down, which set the tone for the whole interview. The entire time was one joke after another, with the talent laughing almost as much as the rest of us!

Even with all the humor, there were a few serious moments and some truly great pearls of wisdom that came from each actor we interviewed.

Q: How did you become involved in your roles? Why did you want to become a part of this film? 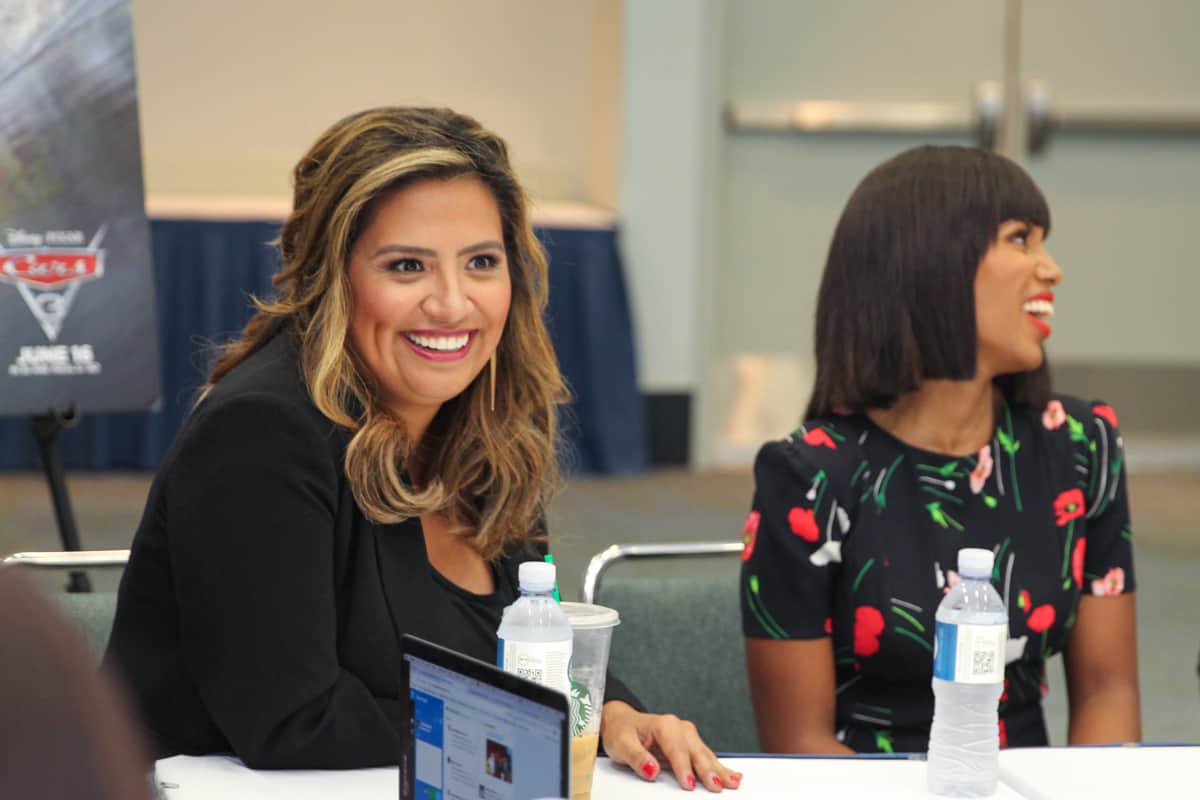 Cristela Alonzo (CA): I got a call from my agent asking if I wanted to go to Pixar. I was like, “Well, that's a random question, but yes.”

I had no idea I was being considered for anything. I didn't know anything until I got there.

It wasn't until they sat me down in an office and broke down this Cruz character…immediately I thought, “Wait, this is a job interview? I would have dressed up better for you!” I mean, I was wearing my Target best…Who, What, Wear, right guys? So I became involved in November of 2015.

I'm glad no one told me because I would have been very nervous, so it allowed me the chance to be myself and not have any time to work on fake me.

I mean, who ever things you're going to be part of the Pixar world? It's incredible.

Kerry Washington (KW): I got a call much later. There was a role to play; a super know-it-all, bossy-pants arrogant, so would I be willing to go way against type? [laughing].

I've been a fan of this franchise for a long time, and I was just honored to be a part of it and excited to do something my kids could watch.

Owen Wilson (OW): I met John Lasseter at a dinner and he was telling me about this idea. I didn't think anything would come of it. I didn't know who he was. Then it all fell together.

Armie Hammer (AH): I wish I had a really good story. They called me. They said, “Do you want to be in the movie?” I was like, yep.

Q: I feel like Cars 3 is a big moment for girls, for women. What message do you want to convey with Cruz's character? 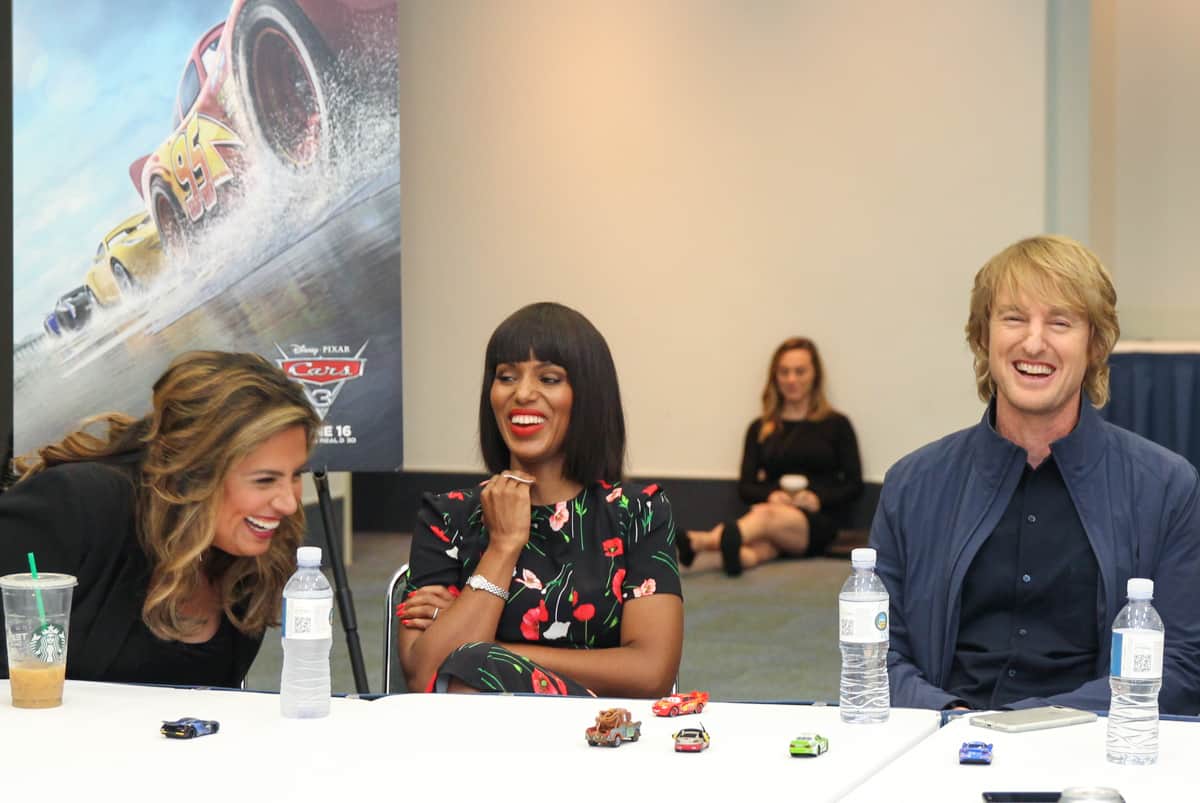 CA: [spoilers removed] The fact that…if you're the best, it doesn't matter if you're a boy or a girl. You have to be the best and try hard.

Q: Are there little pieces of the character that relates to the child in you?

CA: Cruz started off as a boy and they decided to make it into a female.

John Lasseter came into the sound booth when I was recording one day and I thanked him for giving me the opportunity to be part of a Pixar movie.

I started telling him how so many people tell you, especially in the kind of hood that I grew up with, they always tell you that you can't do anything. Everybody in the neighborhood is very quick to knock you down a peg.

So John took that story and ran with it. There's speech where I get upset at Lightning and one of the lines is “Dream small, he told me.” That was actually a line I told Lasseter about my family. My family always told me to dream small…because they didn't want my heart broken.

They always said, “You can't have big dreams because big dreams don't happen for people like us.” So that story where that speech and these stories that I started telling Pixar evolved into Cruz.

What  I like about Cruz, yet at the same time it's very heartbreaking, is that Cruz gets to win in her story, and I don't know if I get to win in my story. I try to bring that part of me into Cruz, and I think that's when they realized that a lot of the heart of the story came from that.

Q: My question is for Kerry: Is there something you learned from the character of Natalie Certain? 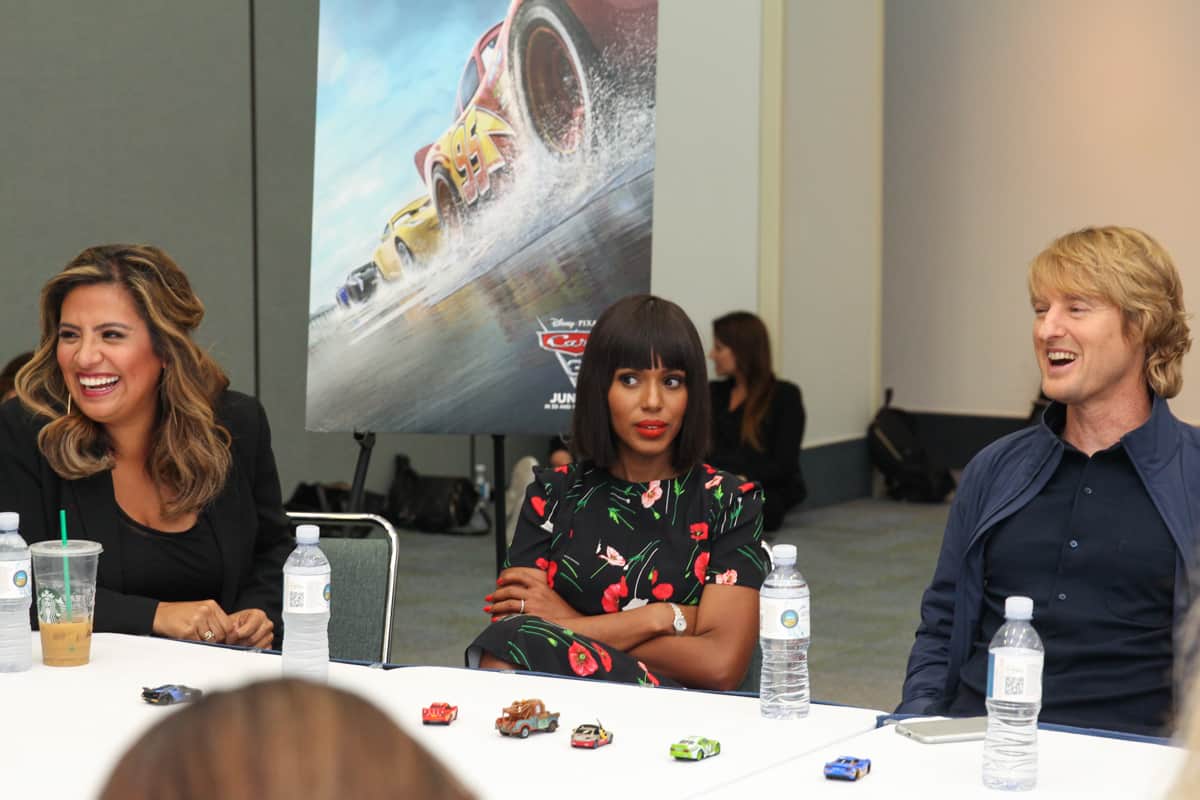 KW: One of the things [Cars 3 and Natalie Certain] have made me think a lot about is sort of this disposable society that we live in.

Natalie Certain is so sure that Storm is going to win, and she's certain that you can kind of discount everyone else because of the hot new thing. I think we have to be really careful about that as a society.

It's so random, but I heard a story recently about how Rutgers University paid more money than they'd ever paid the year Snooki came to teach.

There's no judgment on that, but she's a reality star and that was the same year that Maya Angelou spoke at their commencement. It just made me realize that we can sometimes prioritize hot and new more than we prioritize wise and creative. We need to be careful about that.

OW: [To Kerry Washington] You've got to tell the story about showing the movie to your daughter.

KW: I was telling these guys [Cristela, Owen and Armie] that in our house, we talk a lot about owning your voice and having a voice. And kids can be literal.

When we went to see the movie, my daughter said, “That car has your voice. That's weird. She should have her own voice.”

AH: And that was the moment we all fell in love with Kerry as a parent. How did you do that? 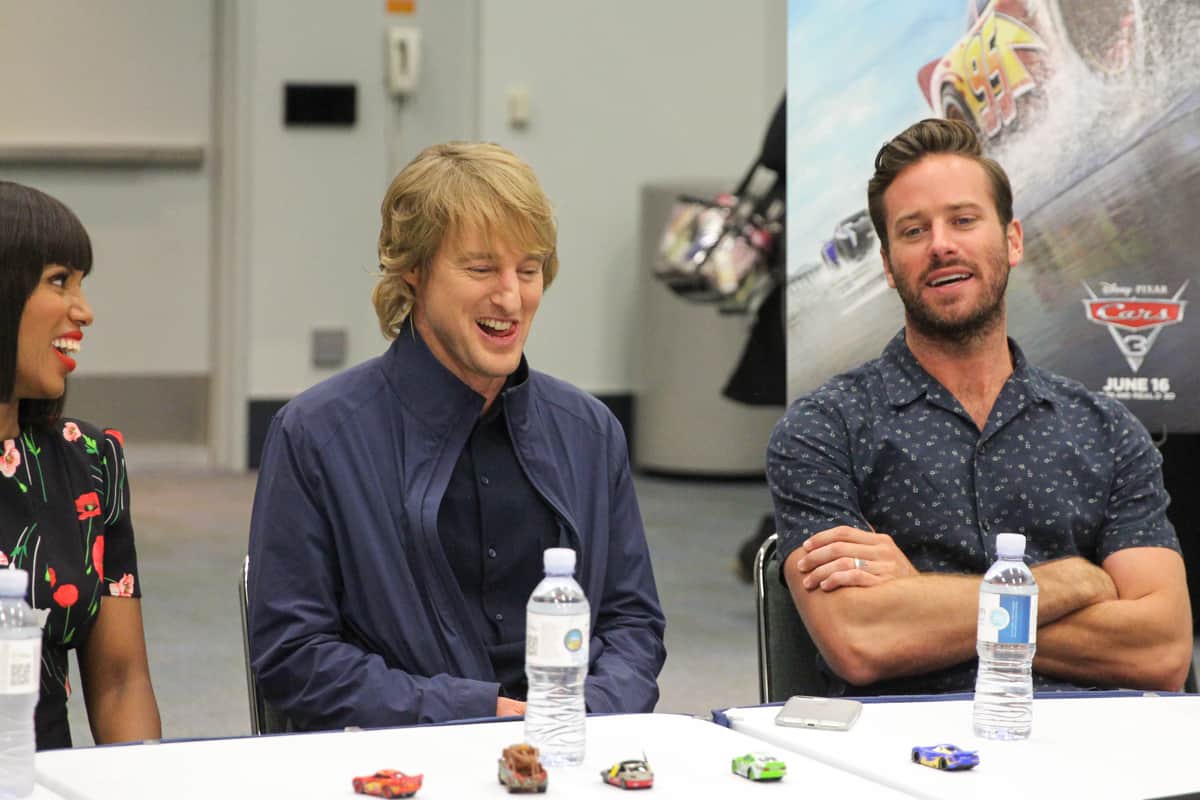 Q: Cars 3 has such a mentor/mentee thread running through it. Who are your mentors, either personally or professionally?

KW: To be in the movie, we've all agreed to say that Owen is our mentor.

AH: That was a requirement for being in the movie.

OW: It just feels good to be a mentor.

CA: Every day I wake up in my bedroom and I see every movie poster Owen has ever done.

AH: He sent them to all of us.

CA: I know, I know. He signed every one. 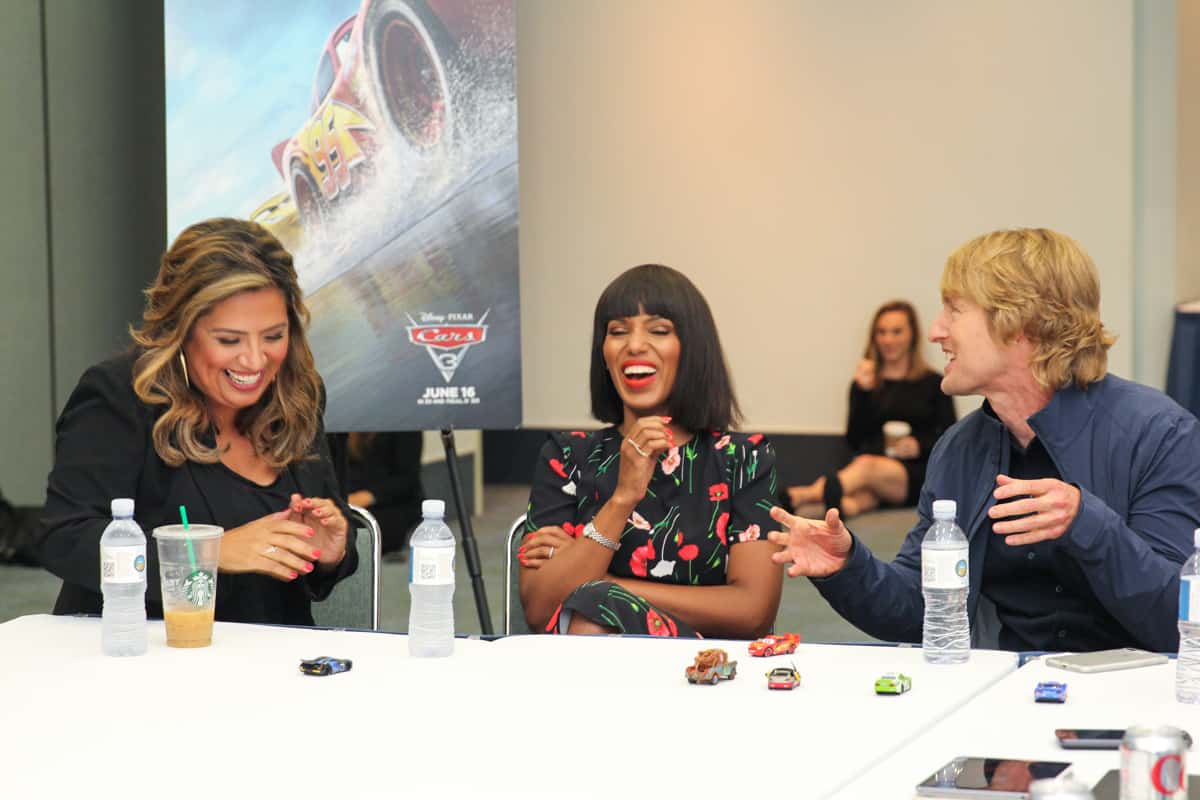 CA: My mentor is my mother, who passed away years ago, and my drama teachers in school. I went to public school at a very small town and these teachers saw something in me.

My high school was 99% Mexican and we used to do plays. My freshman year, we did The Diary of Anne Frank, all Mexicans. It was weird because we didn't think it was weird.

We just did the show. Doing something like that taught me that you couldn't limit yourself into doing things.

Realistically, how many plays do you have for Latinos? Hamilton wasn't around back then. I had a teacher in college tell me that, as a Latina, I could do West Side Story and Chorus line. I did them, and then I thought, well, I guess I have to retire from theater.

So those teachers, telling me you can do a play about the holocaust and be in it and actually do it. That's something, without them ever knowing, that taught me so much. 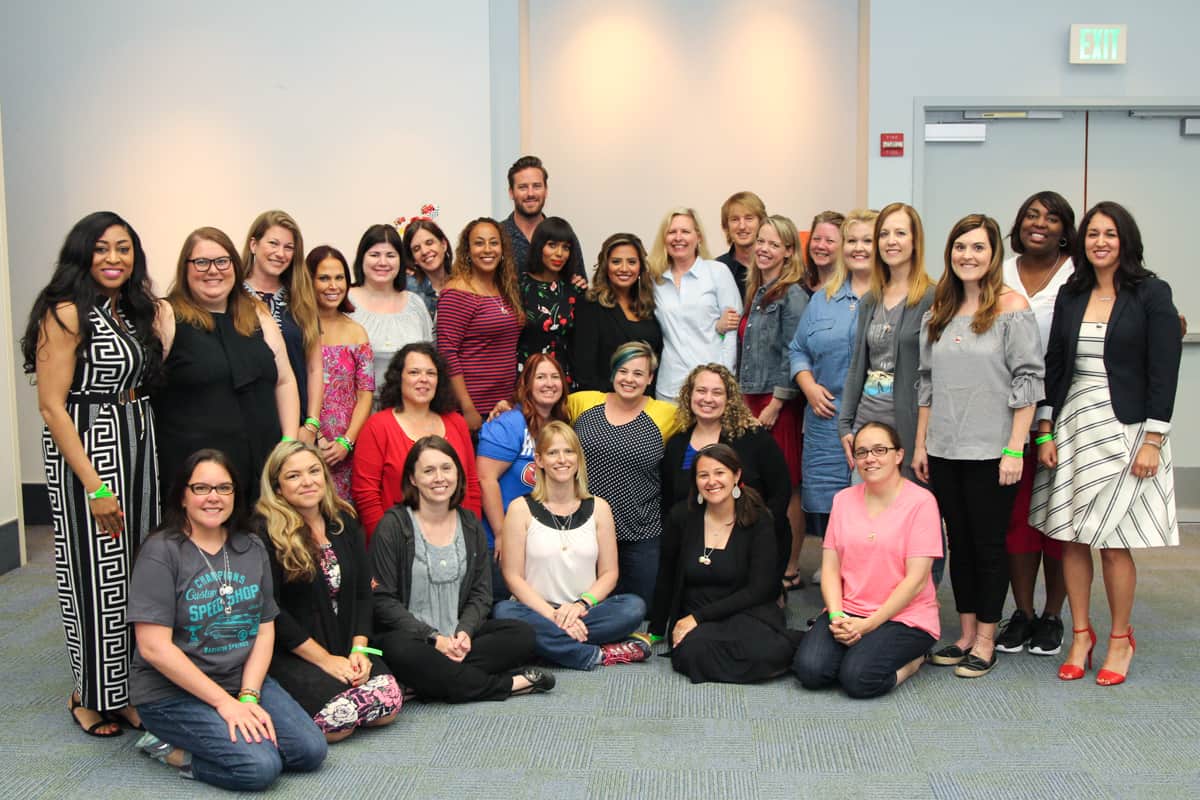 You can probably tell that this was one of the most, if not THE MOST entertaining celebrity interview I've ever been a part of.

I learned so much about each of these actors, and it made me love their Cars 3 characters even more!