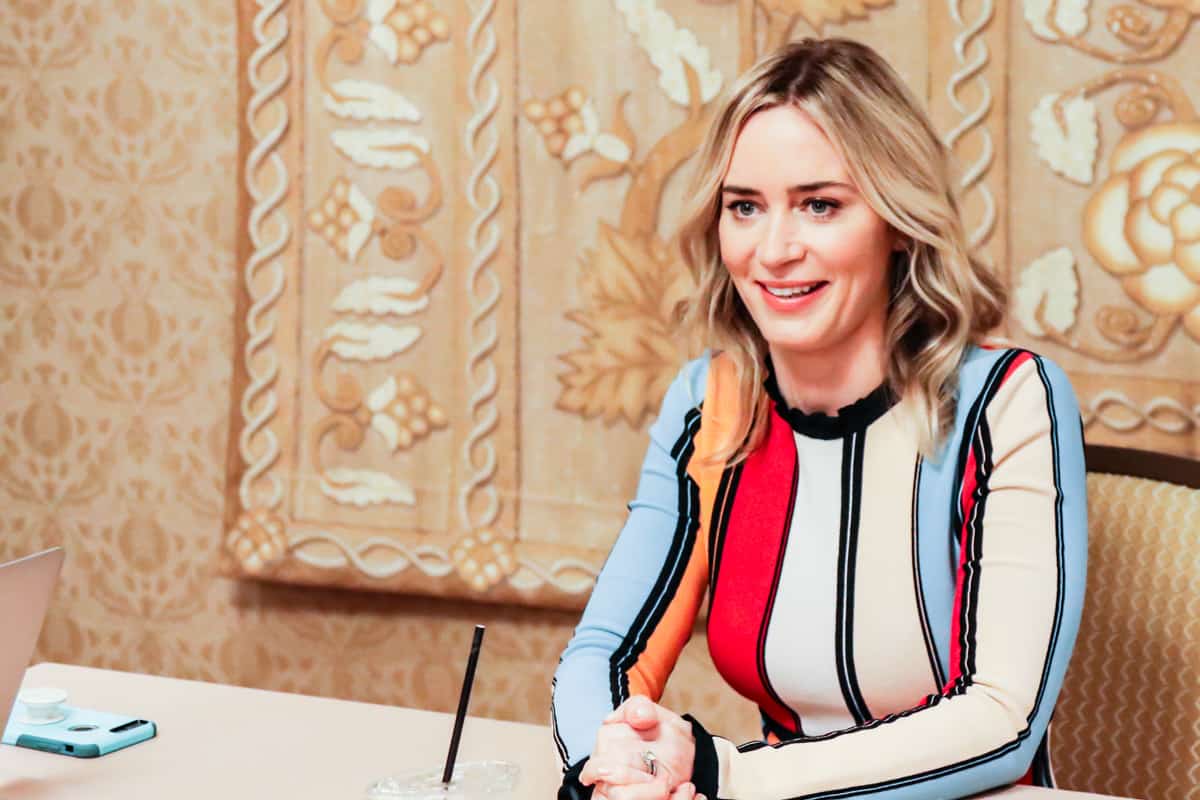 I recently had the amazing opportunity to interview one of the most talented actresses of my generation, and it was everything I had hoped it would be! 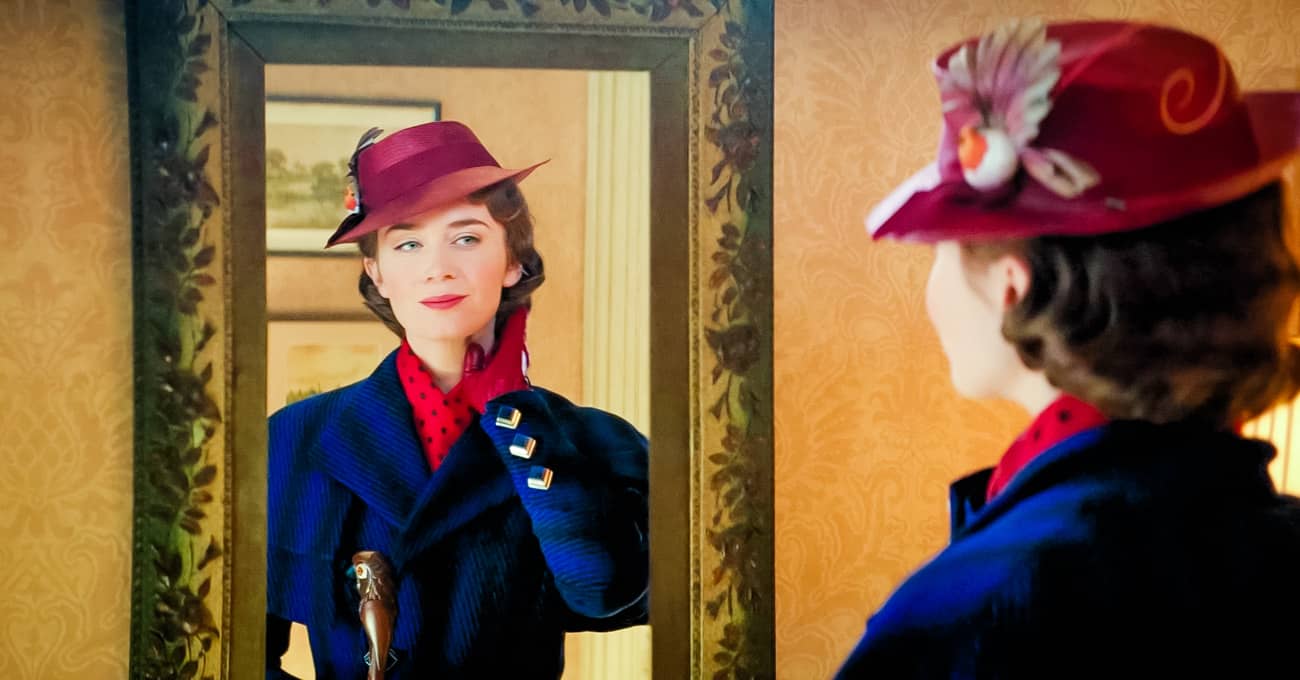 Emily Blunt stars as Mary Poppins in Mary Poppins Returns, and I was able to sit down with her and hear her thoughts on motherhood, performing, costumes and so much more!

How has Mary Poppins impacted motherhood for you?

Emily Blunt: I feel like my whole household is full of imagination and childlike wonder because my kids are so young. So  Ido feel like I’ve sort of rediscovered life through their eyes.

Hazel is a bit disappointed that there aren’t dolphins in her bathtub, so I feel like, in a way, Mary Poppins has shot me in foot. I know I’m only going to be less than. 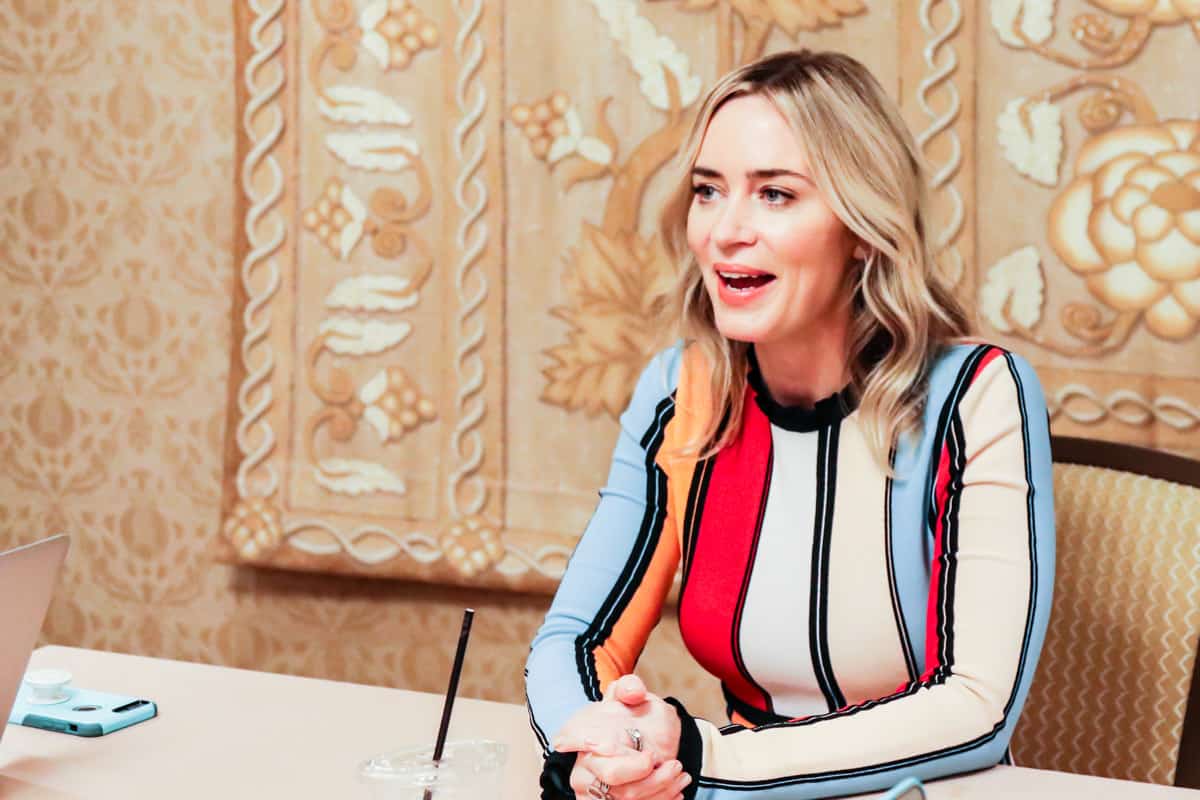 What was the moment when you were like, “I’m Mary Poppins.”?

Emily Blunt: I would say it was the arrival scene where I’m dangling 60 feet from a crane and Rob Marshall played the amazing orchestral music from the speakers so that it was very transporting and really exciting. But I was kind of terrified.

I thought I was alright with heights and then I was up there and…I’m not.

I remember hanging up there and looking down to Lin-Manuel Miranda. But that was the moment because I had the coat, the hat, the umbrella, the feet. The kite.

It was one of the only moments I had to block out the fear of how iconic she was. This was the moment I was hit between the eyeballs with it. 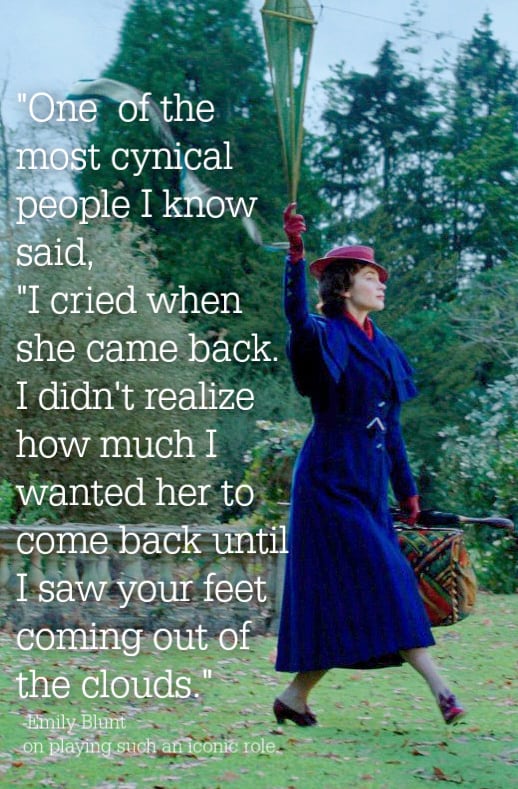 I landed and we did the scene, and one of the crew guys came up to me and said, “I got really emotional watching that.” It was so sweet, because Mary Poppins is back.

We’ve waited 54 years and people have told me, some of the most cynical people I know said, “I cried when she came back and I didn’t realize how much I wanted her to come back until I saw her, saw your feet coming out of the clouds. It was so cool. 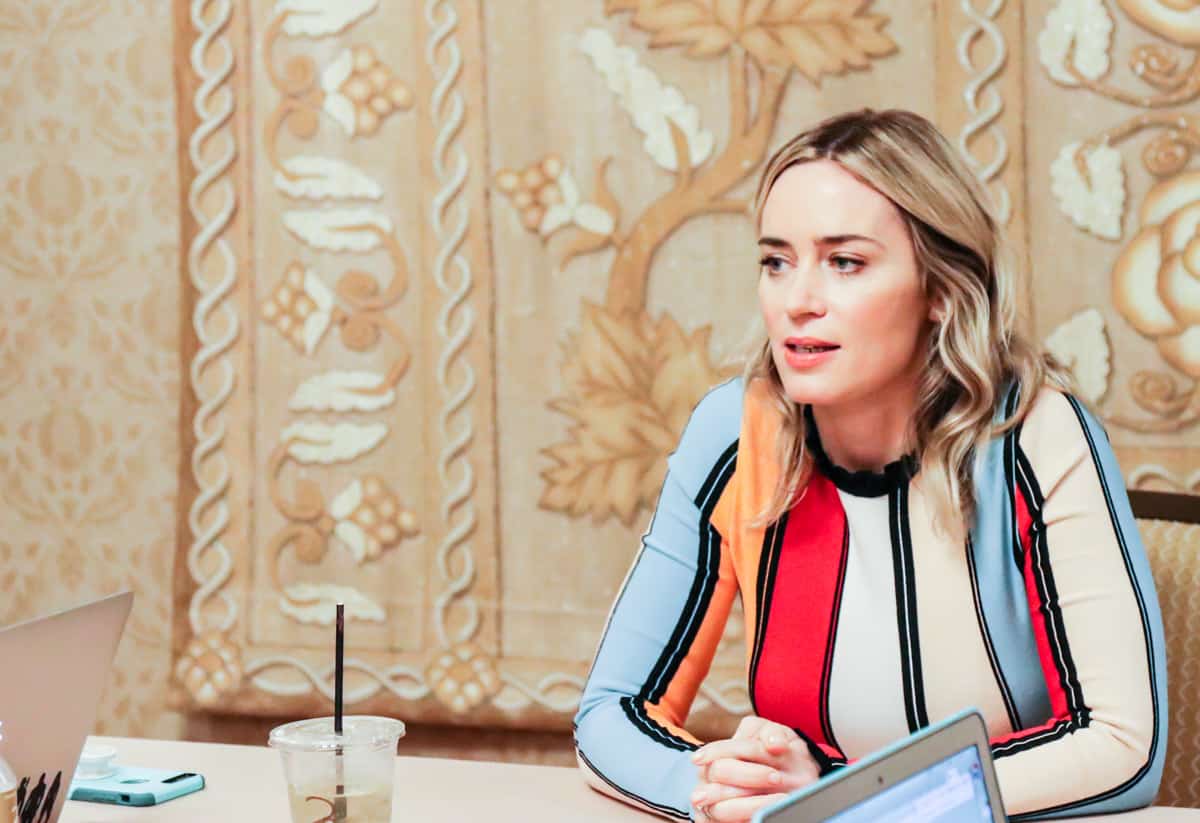 What was your favorite costume in Mary Poppins Returns?

Emily Blunt: I really loved the red suit with the skirt that flowed out when I danced with 30 lamplighters.

Rob Marshall really wanted a Ginger Rogers type of look, and it’s not accurate for the time period to have a skirt that opened up like that.

So the great Sandy Powell created all these very tight pleats so that it looked very chic and straight-line. But when I turned, the whole skirt kind of opened up. She’s just so exciting to work with, Sandy Powell.

All the costumes are so extraordinary, but I think the red suit was pretty epic. I loved it.

Emily Blunt: The dancing was a bit daunting because I’d never done thsoe sort of big, show-stopping Hollywood numbers. But we were in safe hands with the great Rob Marshall and his incredible choreographers.

I feel like Lin-Manuel and I were sort of on par with dancing abilities so we were in it to just get there. If I had been dancing with Justin Timberlake, that would have been really embarassing.

But on a deeper note, I think the initial idea of taking her on because she’s so iconic and Julie Andrews is so iconic and the character has this searing imprint on people’s lives. 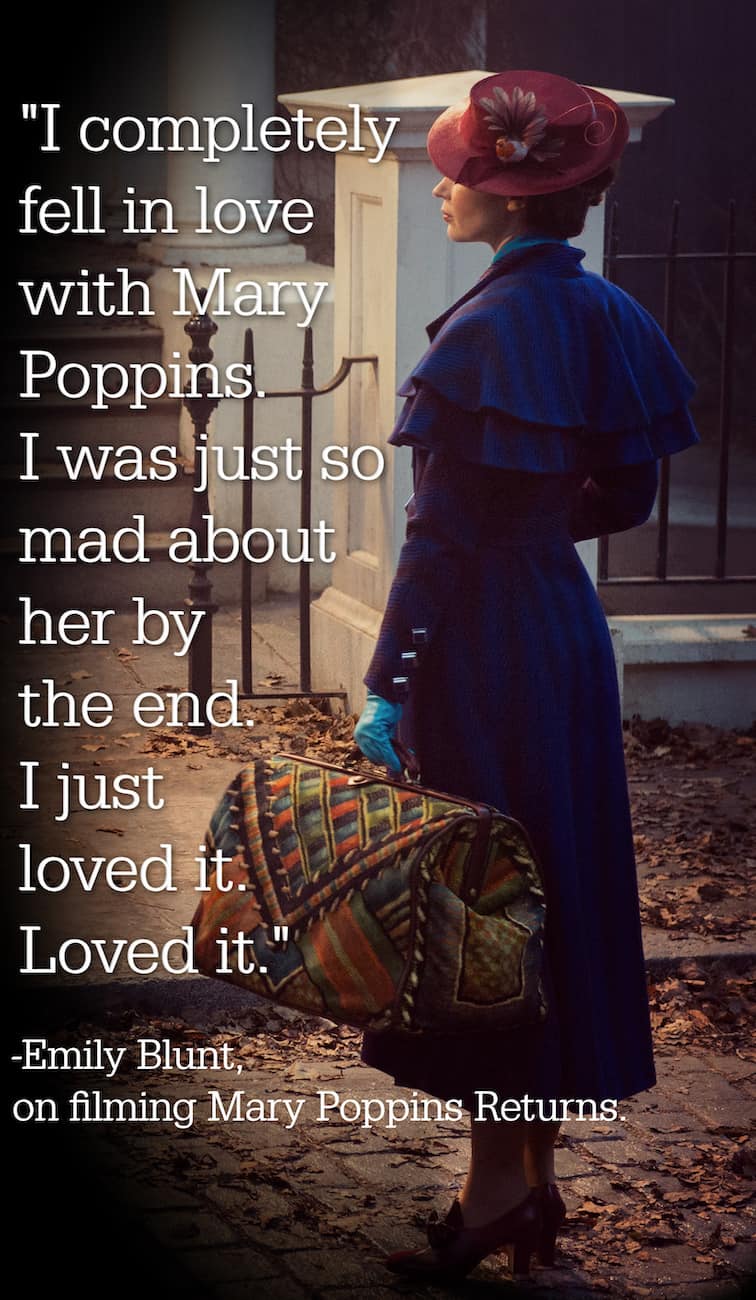 It’s often the first movie that anyone ever saw, and so I needed to get over myself and approach her as I would any other role, and allow everyone’s gasping reaction when I said I was going to take on Mary Poppins.

There’s just so much energy coming at you that you have to allow that to be white noise and just approach Mary Poppins as I would any other character. Then I just completely fell in love with [Mary Poppins]. I was just so mad about her by the end. I just loved it. Loved it. 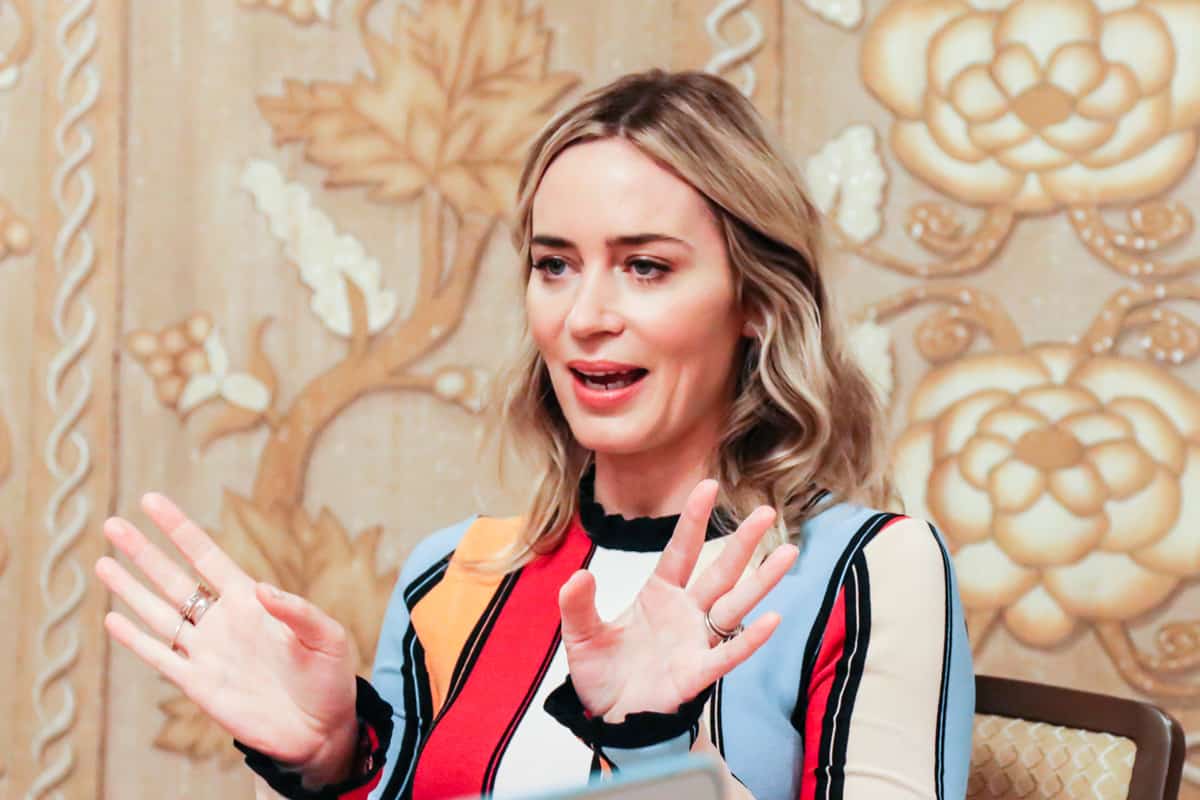 Emily Blunt: I think [Mary Poppins in Mary Poppins Returns] is much closer to how she is in the book. That’s how I played her. In the book she’s incredibly rude and vain and funny and enigmatic and weird. She’s sort of bizarre and layered. For me, it was sort of, “how do I find those cracks of humanity in a super human.”

I said to Rob Marshall, “I really want all the sternness and this sort of imperious quality to her to drop when she goes into these fantasies. She should be like an adrenaline junkie. Sheshould have that sort of duality to her character.

When she goes into these adventures, you’ve got to see her childlike wonder and her thrill and enjoyment of it. Then when it’s over, she pretends none of it happened and she had nothing to do with it. 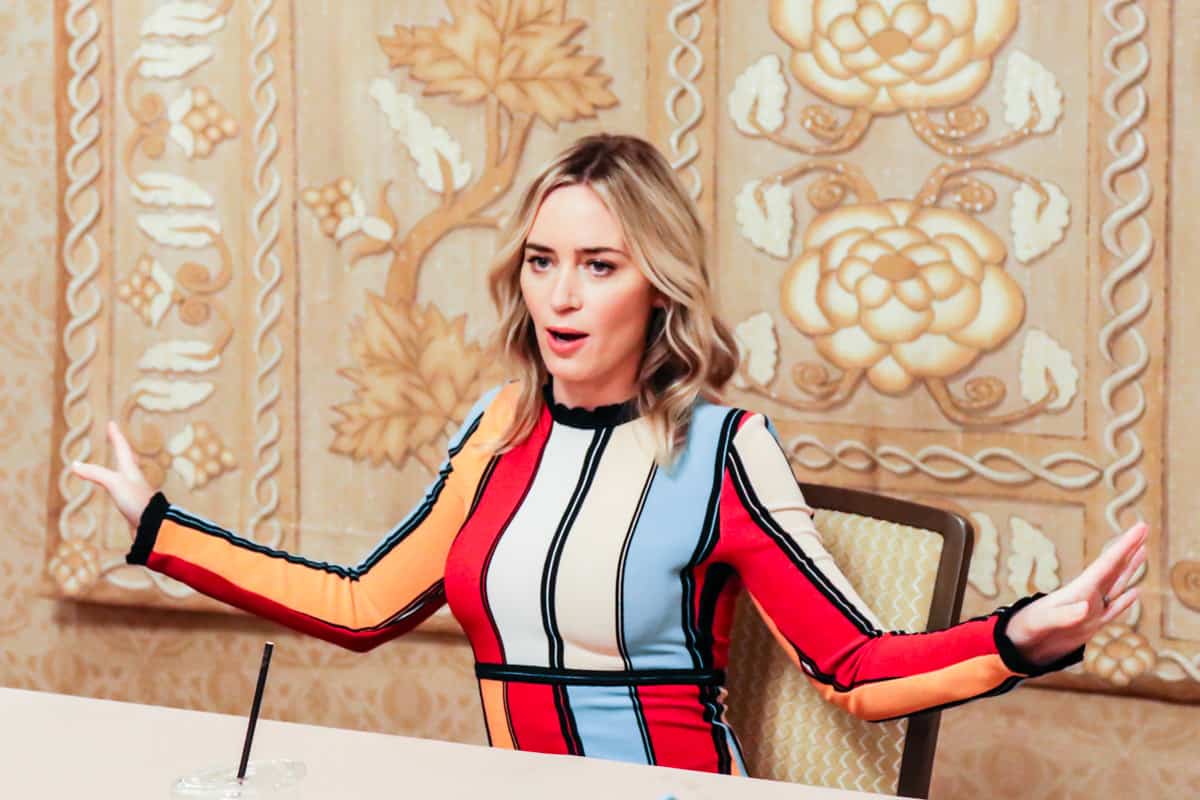 What was it like working with Dick Van Dyke?

Emily Blunt: Working with Dick Van Dyke…It was just so overwhelming, because he’s so sprightly and cool. Just a gorgeous human. He walked on set and he just said, “I feel the same spirit here that was on the first movie.” Of course, we all wanted to cry.

We’d sit around him and just want him to tell us stories about the original and he sang “Jolly Holiday” to me. It was just like, “That’s it. I could die now and be happy. It’s just lights out.”

I think my other moment of, “Oh my God, I’m playing Mary Poppins,” was in the scene with him where he had that beautiful monologue and we’re all crowded around him. He finished the monologue and, in the scene, he crosses his arms and looks up at me. I just remember looking at those iconic blue eyes and I was like, “Wow. that was so wild.” 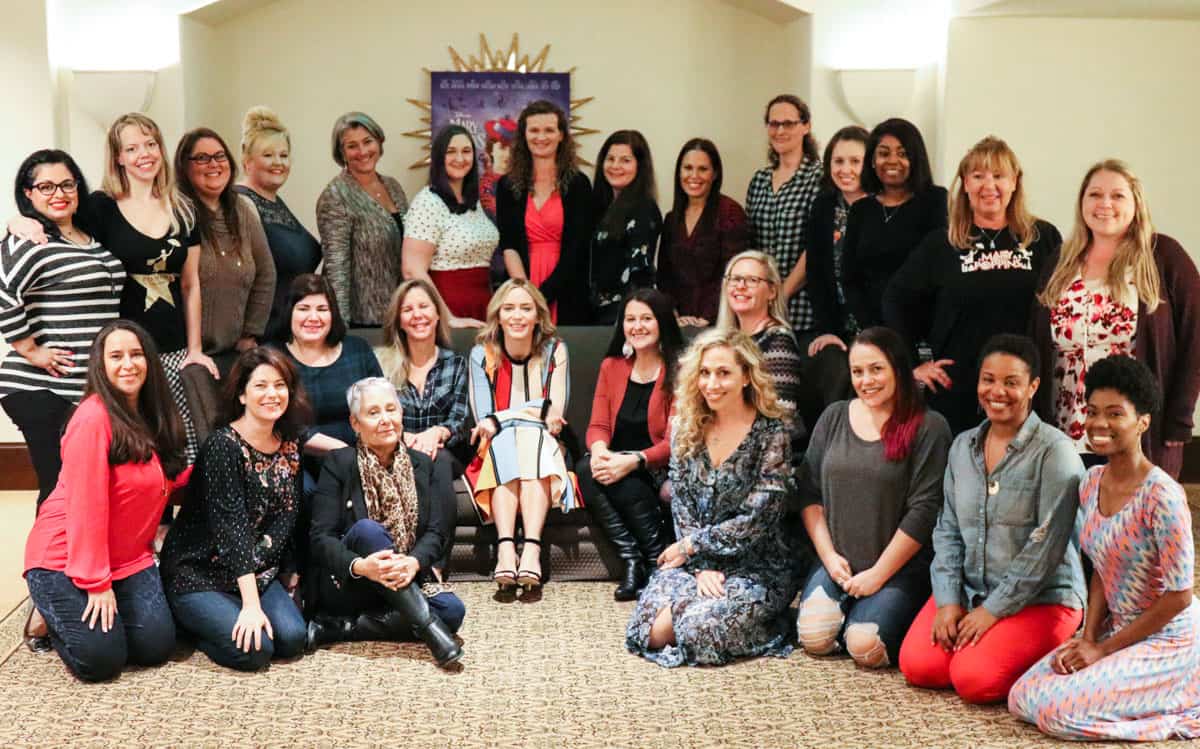 Emily Blunt’s Mary Poppins is also available in three different Funko Pop! vinyl figures. Check out how cute they are:

Entertainment Earth gave me my own Mary Poppins Returns Funko Pop! vinyl. You can buy yours here!