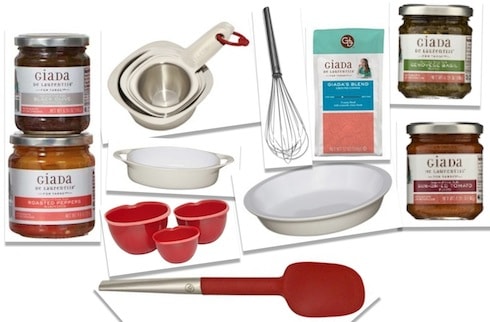 Target does something special when it collaborates with celebrities for special product lines. It’s their merchandising. It draws me in. When I walk by one of the in-store displays for the Giada de Laurentiis for Target cookware and grocery line, I can’t help but stop and take a closer look: 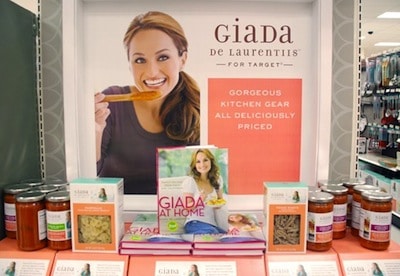 It’s no secret to my family that I love kitchenware. I love bowls, whisks, strainers, cake pans, dishes…everything! The Giada de Laurentiis line for Target is no exception. With everything from understated baking dishes to punchy tools in sophisticated cinnamon hues, these products make me feel a little more fancy when I’m making even the simplest meals for my family!

And food. I don’t think I’ve ever hid the fact that I love fancy condiments. The Giada de Laurentiis for Target grocery line includes pesto, tapenade, sun-dried tomatoes, mushrooms, and plenty of other goodies that make great food taste even better!

I partnered with Mom Central to try out an incredible selection of both kitchenware and groceries from the Giada de Laurentiis for Target collection. Here’s what I received:

You don’t even have to say it. I know I’m incredibly lucky to receive all those amazing items, especially right in time for holiday entertaining!

I wanted to start out by doing a test run of some of the ingredients and bakeware. Since the oval baker looked absolutely gorgeous in the box, I had to use it right away! I found this recipe for Baked Penne with Chicken and Sun-Dried Tomatoes. It was perfect. I used the 2-quart baking dish and I added the Marinated Mushrooms and Sun-Dried Tomatoes! The only change I made was using mini penne pasta instead of full-size noodles, and I only used mushrooms in half of it. This is how it turned out: 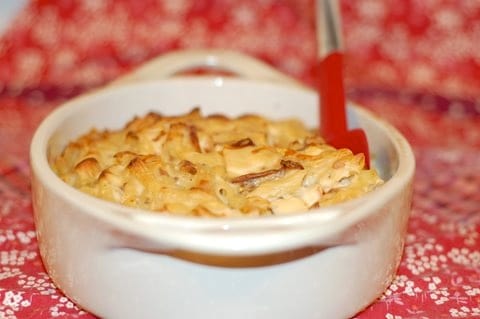 It was fantastic! I’ll definitely be making this baked pasta dish again, but next time I’ll add more sun-dried tomatoes.

The Giada De Laurentiis for Target Genovese Basil Pesto was my second-favorite grocery product (after the sun-dried tomatoes). I made a simple, thin pizza crust, spread it with pesto and topped it with an Italian 5-cheese blend of shredded cheese. 10 minutes in the oven and I had a gourmet flatbread pizza!

I’m not a big fan of peppers or black olives, but we’ll be spending Christmas Eve and Christmas day with my in-laws, who are crazy about roasted peppers and olive tapenade!

Since we never show up empty-handed, I have a few products that I’m happy to share with others who will enjoy them!  I’m planning on slicing up a loaf of French bread to serve with the Giada De Laurentiis for Target Black Olive Tapenade. Another way I’ll make a quick appetizer is to soften an 8-ounce block of cream cheese, and I’ll spoon the Eggplant and Pepper Pesto over the top. That will be served on a platter with crackers. It’s quick and the cream cheese is a terrific way to tone down the strong flavors of the pesto.

I also want to add that nothing is more enjoyable than sharing my own kitchen creations with others who truly enjoy them. Both my mother and father-in-law are huge after-dinner coffee drinkers, and they love sweet treats as much as I do! I’m looking forward to sharing this delicious recipe for Spiced Coffee with Cinnamon Whipped Cream with them.

Out of all the products I received, I only have two suggestions for improvements:

First, I think the plastic mixing bowls are flimsy. I like heavy bowls, and I try to avoid using plastic kitchenware for anything except dry storage. I prefer ceramic, glass or metal bowls like this 3-piece set of Giada de Laurentiis for Target stainless steel mixing bowls.

The only other suggestion I have is for the measuring cups. The stainless steel set is definitely heavy and high-quality, but I wish it included a 3/4 cup and 2/3 cup measuring cups. Sets including those measurements are hard to find, but they make the life of a baker so much easier!

All in all, the Giada de Laurentiis for Target line is full of stylish cookware and delicious food! I’ll be using the kitchenware I received for plenty of everyday and special occasion cooking, and I know all those grocery items will be gone by the end of our holiday celebrating!

I wrote this review while participating in a blog tour by Mom Central Consulting on behalf of Giada De Laurentiis for Target and received product samples to facilitate my review.