Being a mom of “two under two” means that I'm going to have both little ones in diapers for a while! While I'm aware of diaper disposal systems, I honestly never thought they were something we needed in our home. After Haiden was born, we quickly realized that we never changed his diaper in the same place. We never used our changing table, so we didn't have a central area to put a diaper pail. But, when Mom Central offered me an chance to try out two competing brands of diaper disposal systems, I thought this would be the perfect opportunity to see if I thought they were worth the money. As always, I want to only recommend the best baby products at the best prices for all of my readers, and this opportunity will give me some real experience with diaper pails!

I started Week 1 of the Diaper Pail Test Drive by trying out the Playtex Diaper Genie II Elite. It was beyond easy to set up and start using. The only assembly required was fitting two big plastic cylinders together, then inserting the plastic bagging system. It took all of 5 minutes from taking it out of the box to having it ready to go!

My first impression was that it looked pretty good for a modified garbage can! I've seen older versions of Diaper Genies at baby resale shops and garage sales, and this design is much sleeker and more modern than what the Diaper Genie used to be. That's good, since it's pretty big. James (my husband) and I usually find ourselves changing diapers in our living room so the most logical place to try it out was in there. It's not a gigantic space, so the Diaper Genie II Elite does stick out a little bit, but the clean design definitely doesn't scream “dirty diapers”! 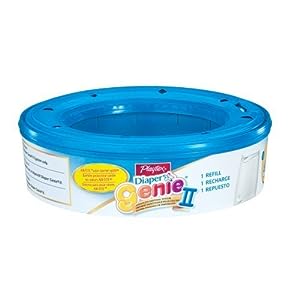 The first week's results: I am pleasantly surprised by the Diaper Genie's performance! The plastic bag “refill” pack says that each refill will hold 180 soiled diapers. I haven't counted, but I've been very, very happy with the minimal amount of times we've had to remove the full bag of dirty diapers and refill the clean bag. I also think the removal and replacement of the plastic bags is pretty fantastic. The system is designed to waste very little plastic, and it seems to work. You just grab the top of the bag, slice it off with the cutter, then pull the new bag down to the bottom and knot it off. I also knot off the dirty bag, since, well, it's full of garbage!

So far, here's what I like about the Diaper Genie II Elite:

Here's what could use improvment:

Overall, I'm happy that we're using the a diaper pail for odor control alone. The rest of the features are just icing on the cake!

Next week I'll be reviewing the Arm & Hammer Diaper Pail by Munchkin!

I am a member of the Mom Central community and I wrote this review while participating in a blog tour campaign by Mom Central, provided by Diaper Genie, and received a free Diaper Genie diaper pail and a free Munchkin Arm & Hammer diaper pail to facilitate my review.