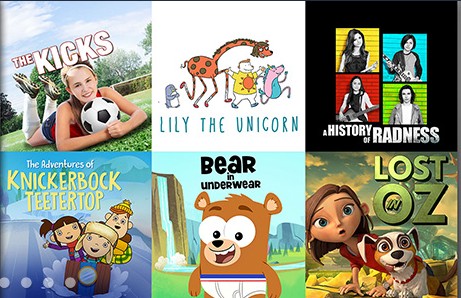 For a limited time, you can watch 6 new Amazon Original Kids Series for FREE! After you watch you can help pick the new Amazon Kids series by rating your favorites!

Eddie is an eternally optimistic bear who aspires to be a forest legend like his dad, who discovered “pants” (actually tighty whiteys) at an abandoned campsite. With a quirky crew of forest animals who share a slightly skewed perspective, Eddie embarks on a series of delightful hijinks as he learns that becoming a legend has its challenges.

Or Lost in Oz:

When 12-year-old Dorothy Gale discovers her mother's mysterious journal in her Kansas home, she and her dog, Toto, are transported into a bustling, modern Emerald City. Disoriented and determined to get home, Dorothy embarks on an epic journey with West, a young witch, and Ojo, a giant Munchkin, to seek the magic she needs – as Oz faces its greatest magic crisis. Based on L. Frank Baum's books.

Head over to Amazon.com and watch today for FREE!