↑
Home » Entertainment » Bao and the Magic of Pixar Storytelling 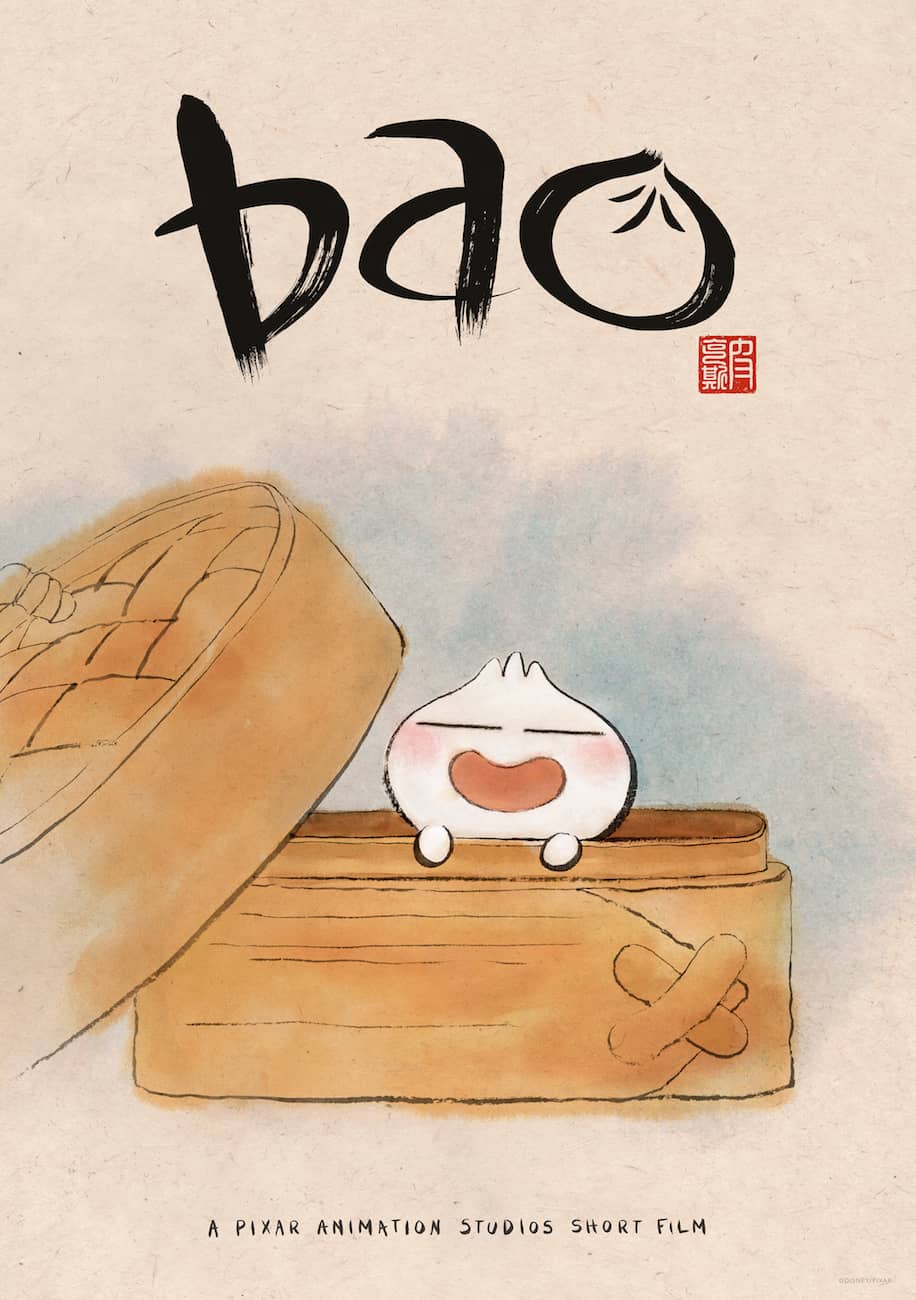 Get ready for Bao, the brand new Pixar short that’s appearing in theaters before Incredibles 2!

In Bao, an aging and lonely Chinese mom gets another chance at motherhood when one of her homemade dumplings bursts into life as an adorable, giggly dumpling boy.

Mom excitedly welcomes this new baby into her home and her life, but little Dumpling starts growing up fast, and Mom must come to the bittersweet conclusion that nothing stays sweet and small forever.

This short film from Pixar Animation Studios and director Domee Shi explores the ups and downs of the parent-child relationship through the colorful, rich, and tasty lens of the Chinese immigrant community in Canada.

Watch this short clip from Bao to meet the characters and get to know the basics of this new Pixar story:

Bao appears in theaters before Incredibles 2. 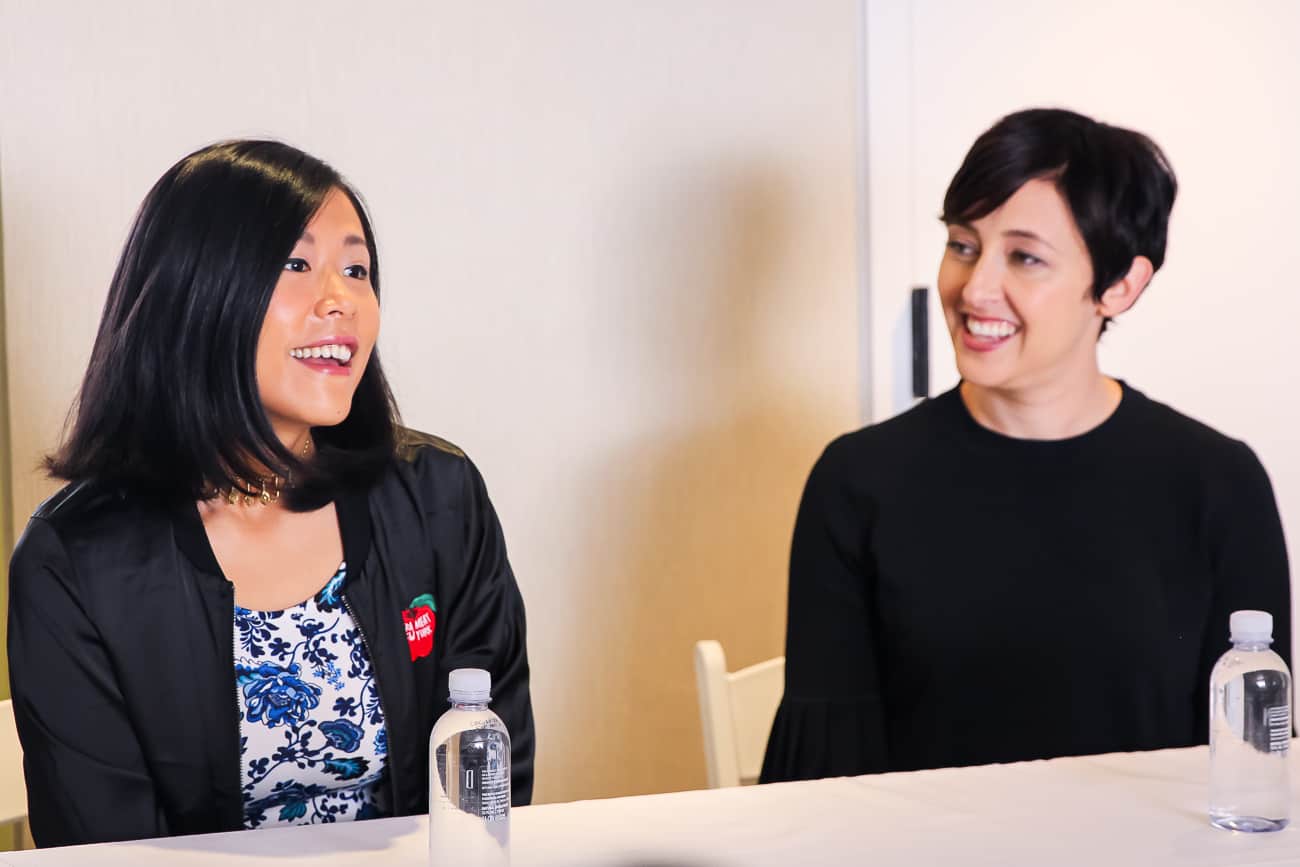 I had the chance to sit down with Director Domee Shi and producer Becky Neiman to talk about Bao and the magic of Pixar storytelling. I loved what they had to say!

Related: Pixar’s Rules of Storytelling and “Lou”, the Short Before “Cars 3” 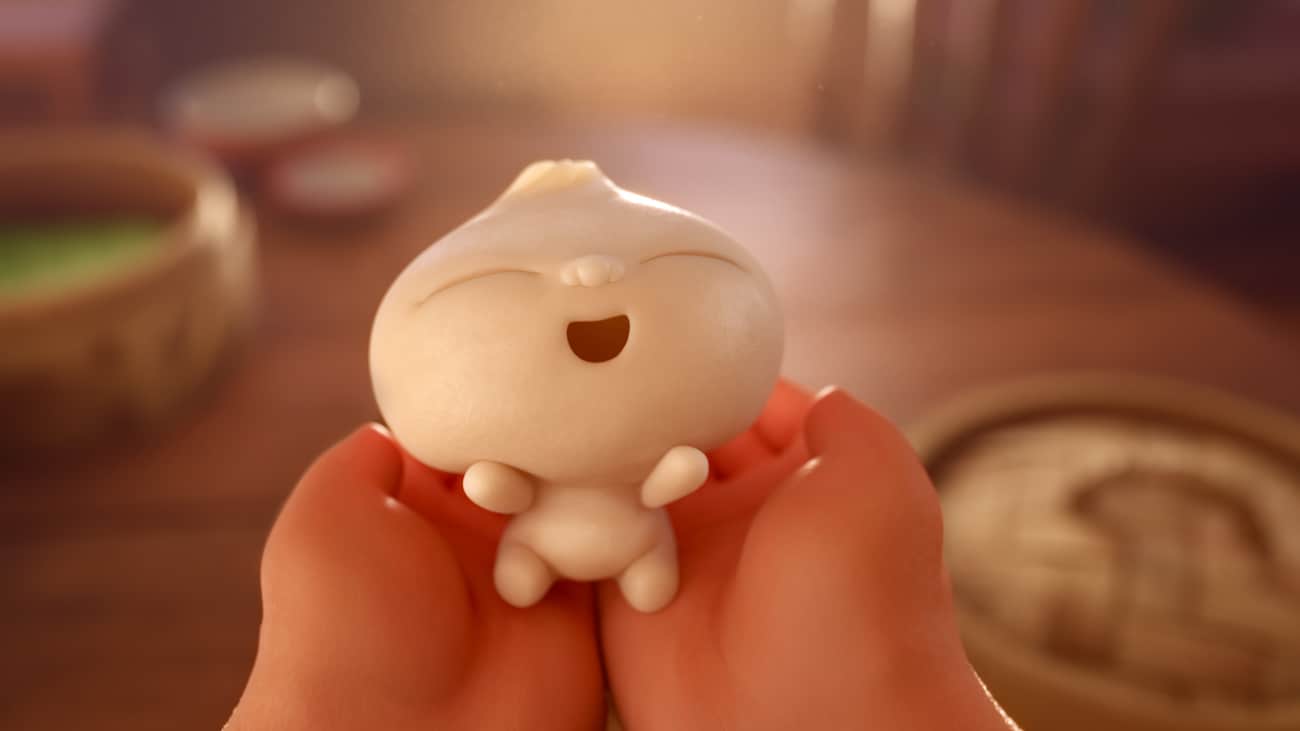 What does Bao mean?

Becky Neiman: “Bao” has two translated meanings. One is “steam bun” and one is “treasure” or “something precious.”

What was your inspiration for the film?

Domee Shi: Four years ago I was in my office late one night and I was really hungry. I just wanted to do a modern take on a classic fairytale like The Gingerbread Man, but with a Chinese dumpling. 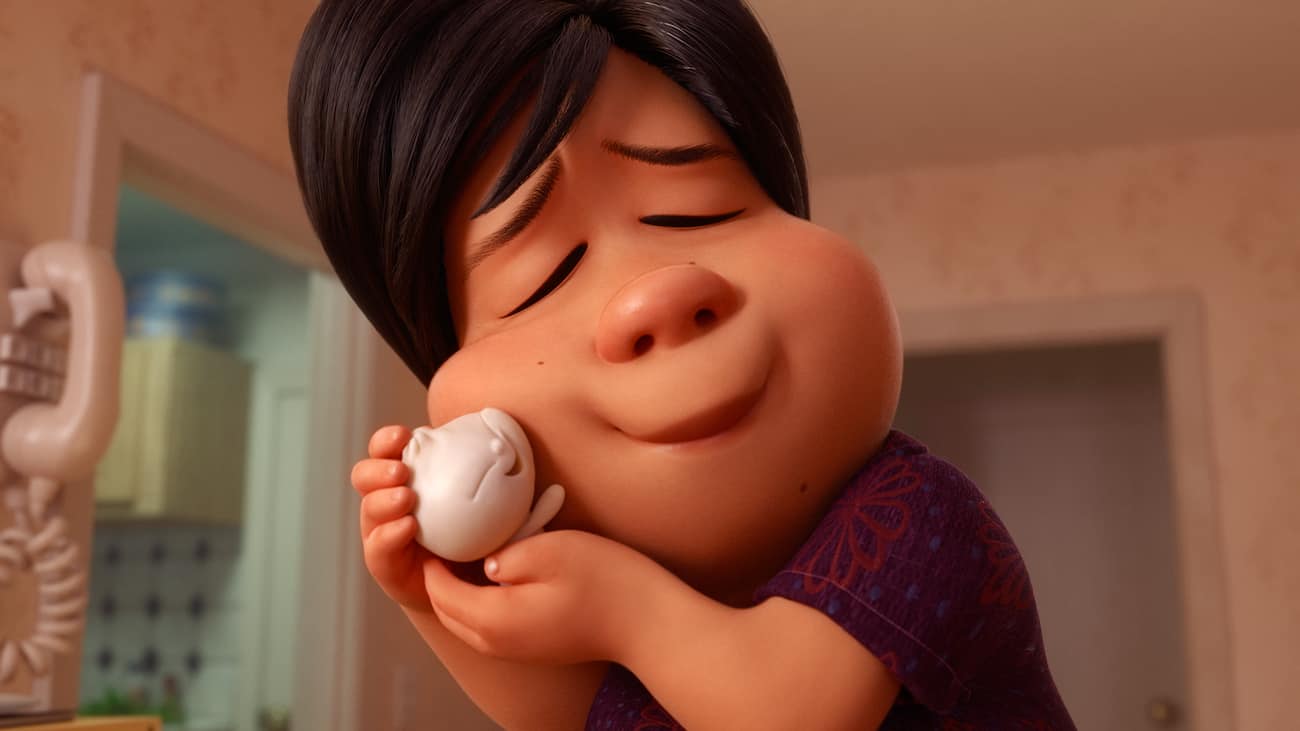 I started doodling this image of a mom nuzzling her little baby boy dumpling to death. As I was drawing I started to develop the story while drawing a lot of inspiration from my own life growing up.

I’m an only child, and I feel like my mom and dad have always treated me like a precious little dumpling. Always making sure that I’m always safe and never wandered away too far. My mom is actually right over there [laughs], so I didn’t wanter away too far. 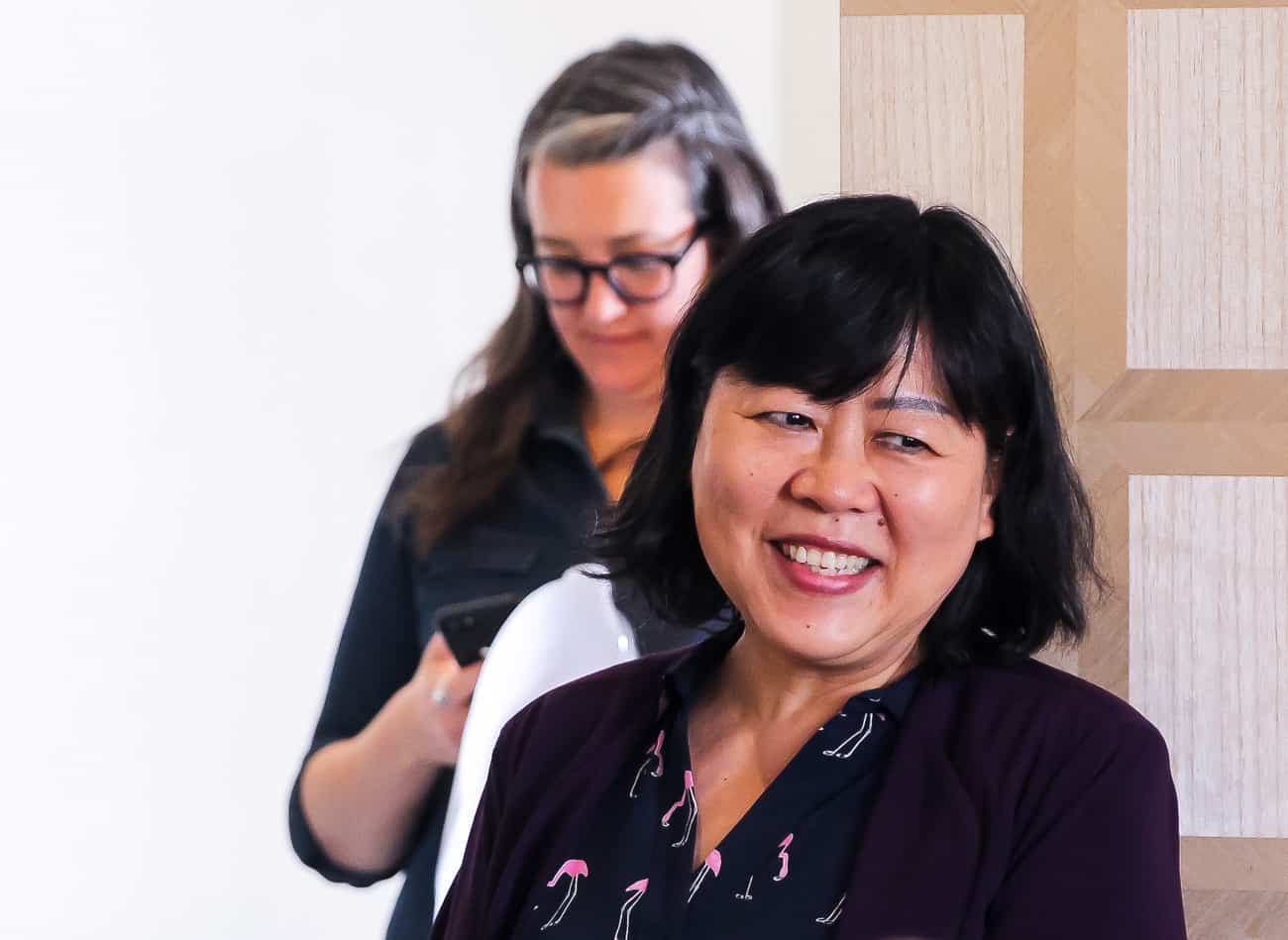 I wanted to explore that relationship between this child and this mom character learning to let go.

Domee Shi: When I’m developing any art I want to learn something new. If the film was told from Dumpling’s point of view…I already know what it is, because that’s me. I wanted to know what it was like for my mom learning to let go of me. 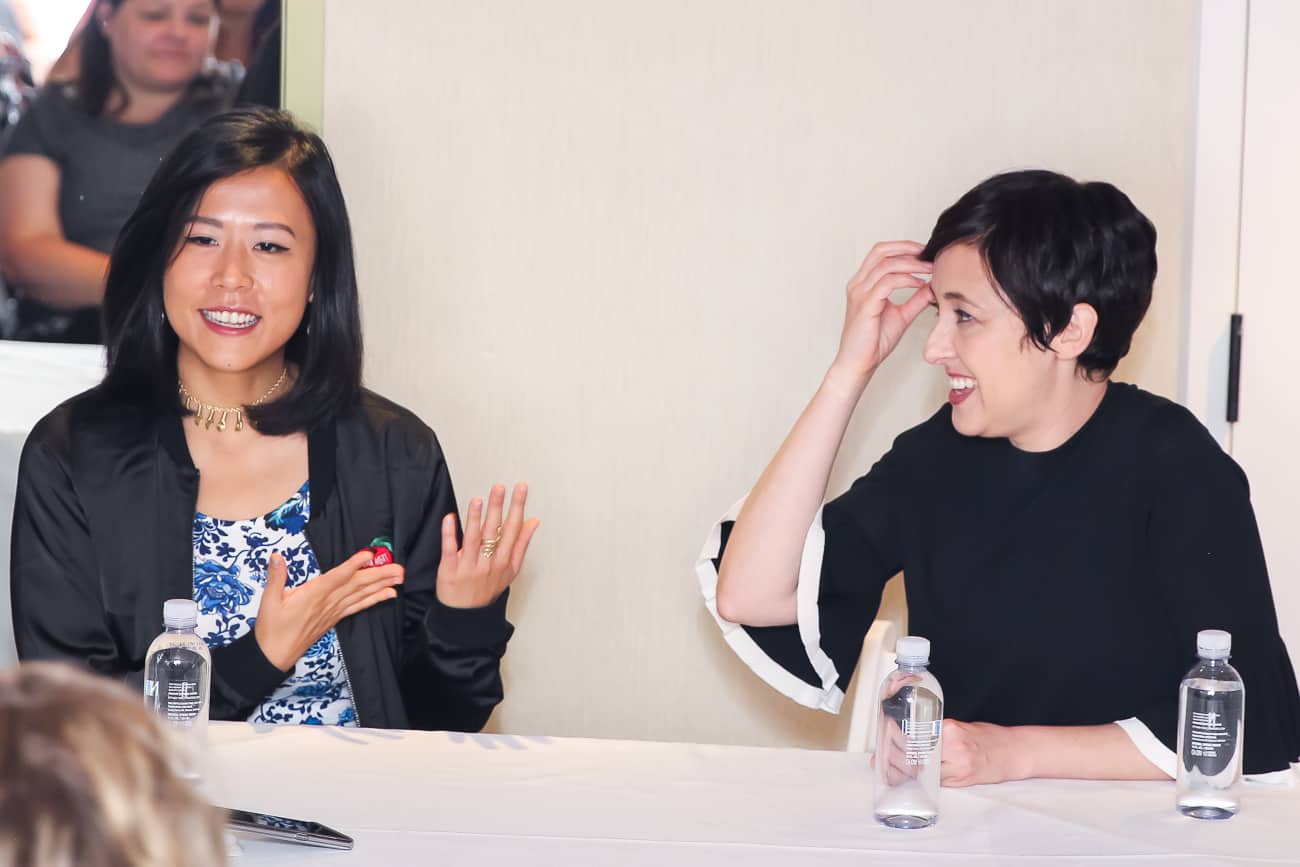 Then if it gets too autobiographical, then you get too precious with the details and you don’t want to cut stuff out. So it was good to do it, to tell the story from a distance.

Did you consult your mom while making Bao?

Domee Shi: My mom actually has a creative consultant credit. We brought her in twice to do dumpling-making classes for the whole team.

It was really important for us to get all of those dumpling making and recipes right. So we got the animators and effects artists in there to study my mom’s technique of how she folds the dumpling and kneads the dough and smells the filling. 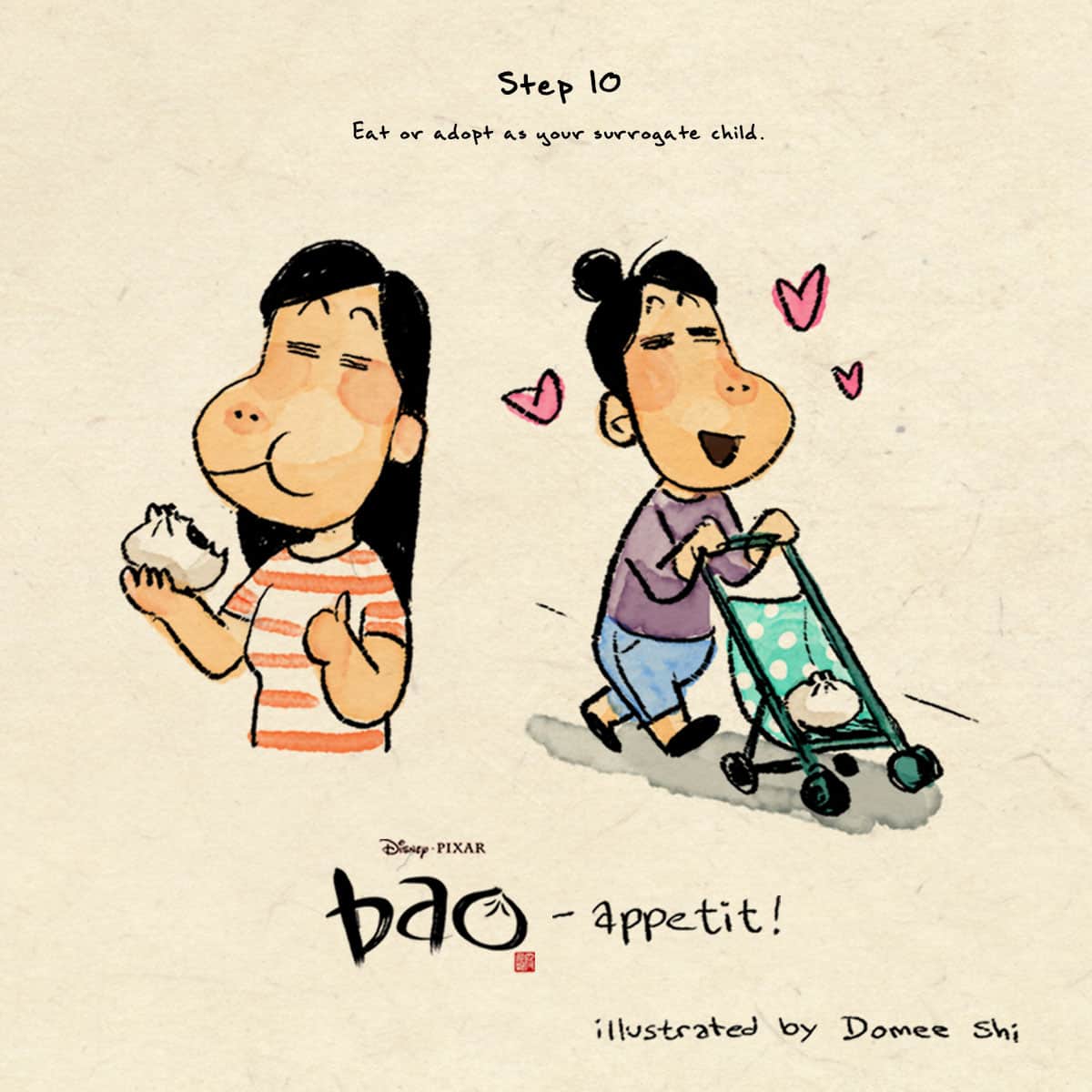 Note: Domee and her mom were kind enough to share her original recipe for the dumplings that inspired Bao! Get your printable dumpling recipe here!

Pixar is really well known for their rules of storytelling. What were the most important rules you followed while making Bao? 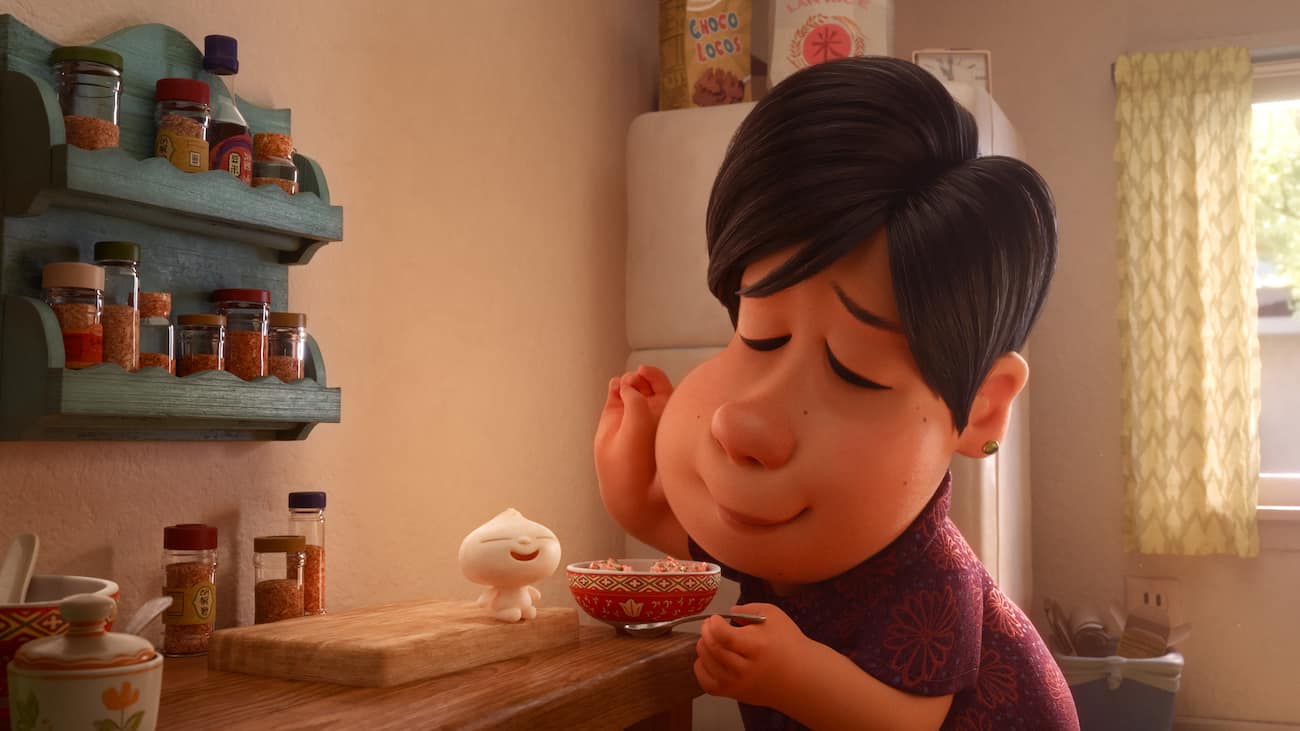 Domee Shi: I think it’s really important to pick your main character and follow them emotionally throughout the whole story. For us that was the mom. We tried to tell the whole story from her point of view.

We tried to get the audience to be feeling what she’s feeling on the screen and to never feel like they were ever ahead of her or behind her emotionally. 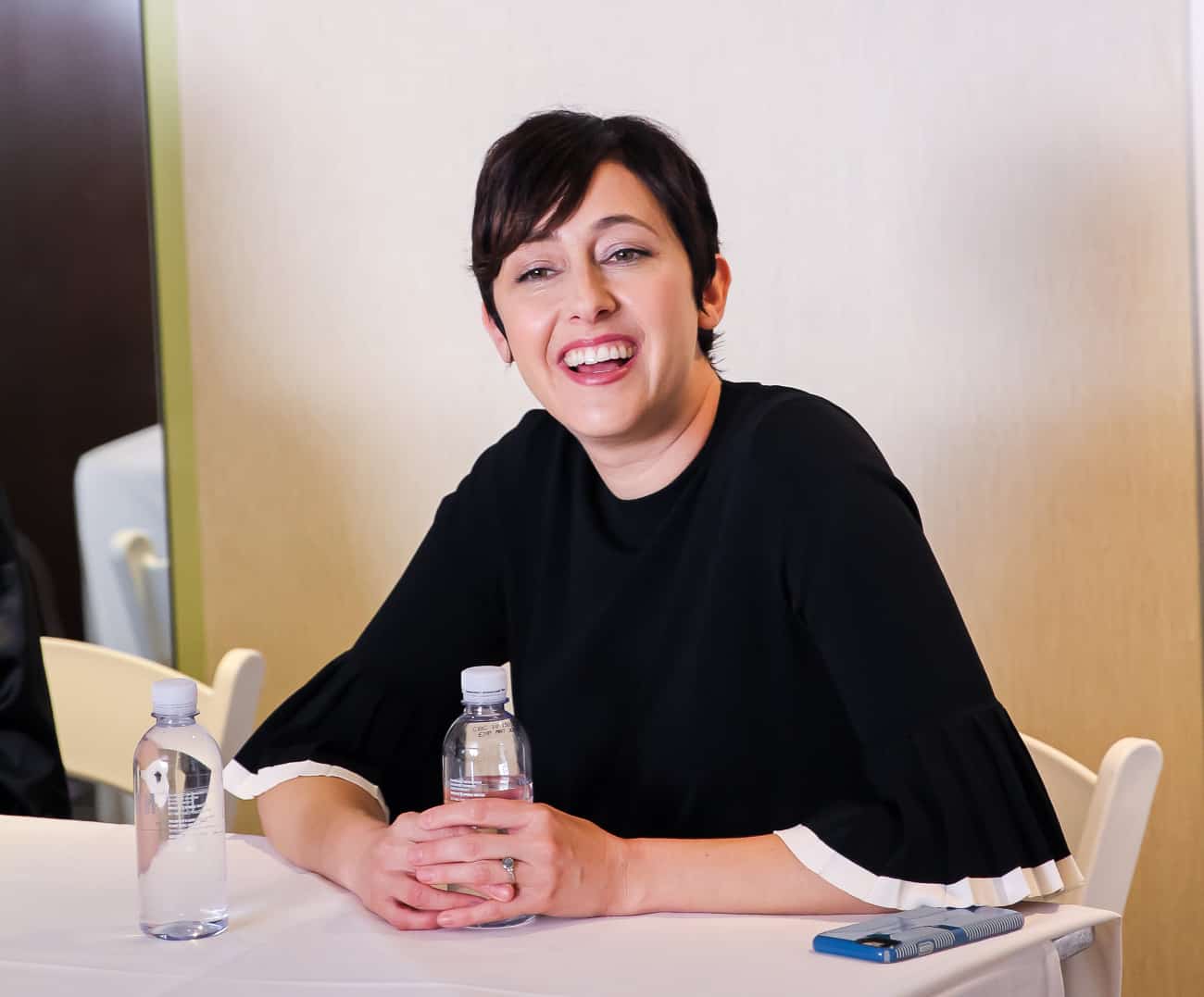 Becky Neiman: That would even be the direction we’d give when we were working with our composer. Like, Mom feels terrible right now, the music needs to reflect that. Or this is a happy time for her. They’re really connected. Even the lighting direction would support that. 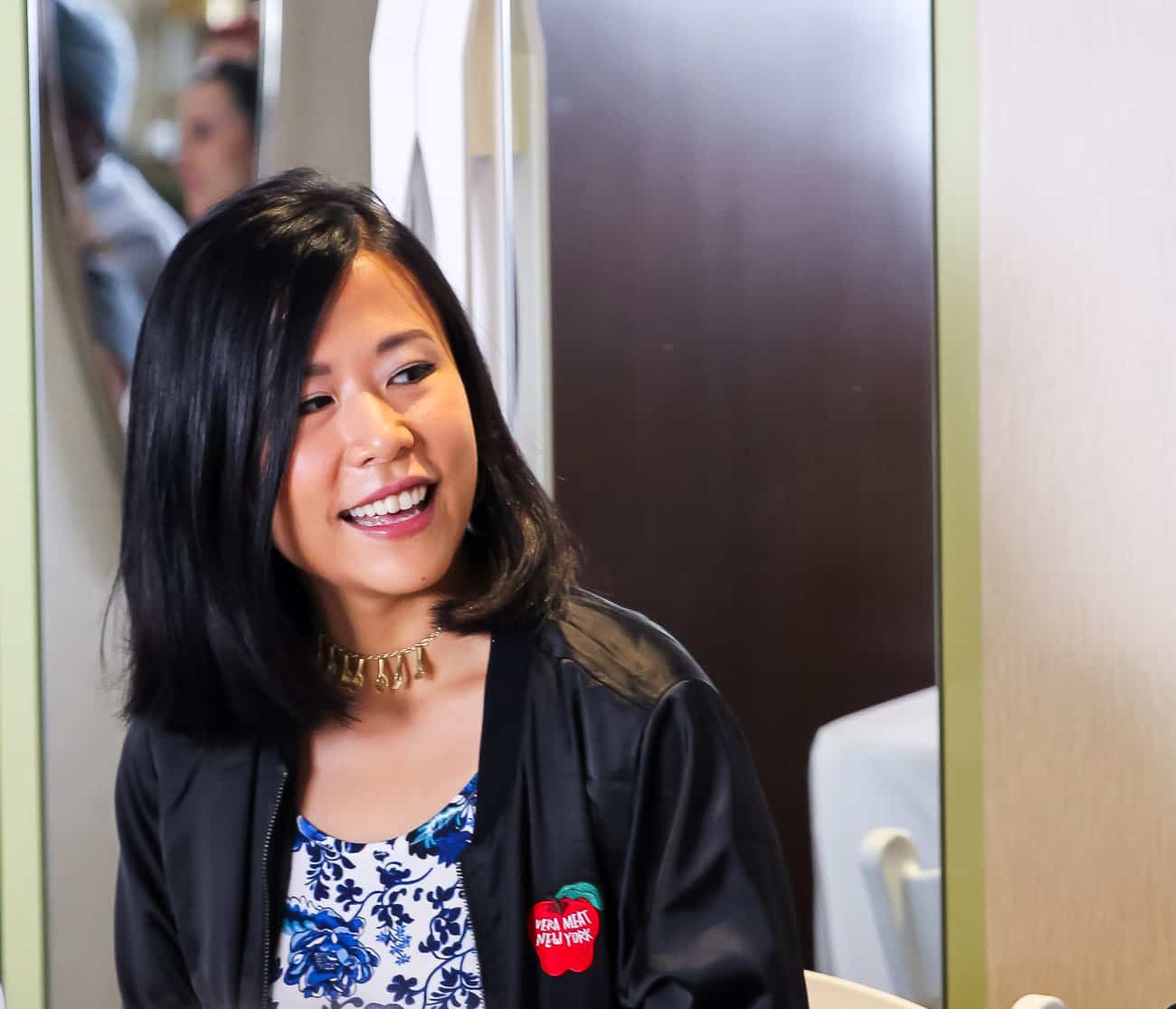 Domee Shi: Everything has to support the characters and their emotion throughout the story. So we couldn’t design stuff just because it looked really cool or colorful.

We had to think about where we were in the story. Is Mom feeling low or lonely? Or is she feeling happy? Then we would design her clothes to be even more colorful if she’s feeling really happy and close to Dumpling.

Becky Neiman: Or the lighting would reflect the relationship between Mom and Dumpling. We would separate them with light and shadow when they were growing apart. And we’d bring them together in  a warm glow when they’re closer together.

Did you find more challenges because the short doesn’t have words?

Domee Shi: It was challenging, but I really loved the challenge. My background is storyboarding and I just love visual storytelling so much. 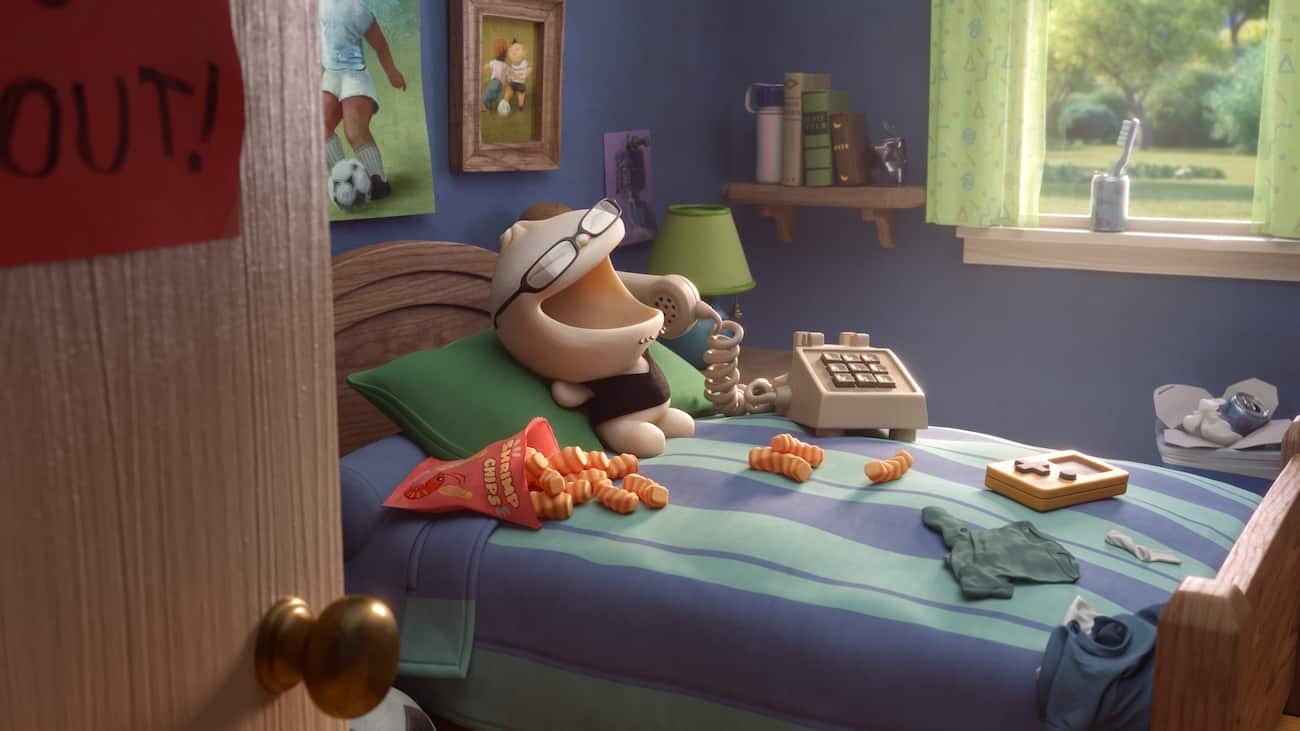 It was a conscious decision early on to take out the dialogue completely from the whole short so the story could be understood more universally. Anybody from any country and age could understand what was happening.

I think animation is such a cool visual medium, too. I thought it would be a challenge for the team to push themselves to tell the story and the emotions through the acting, through the set dressing, through the colors.

You’re the first female director of a short at Pixar. How do you feel about that?

Domee Shi: I feel super honored and humble, but hopefully I’m the first of many female short film directors and feature film directors. It’s been awesome.

I was just telling Becky that it almost didn’t hit me that I would be the first, because I was just so focused on finishing Bao and hoping people liked it or understood it. Now  I can sit back and bask. We’re blazing that trail! 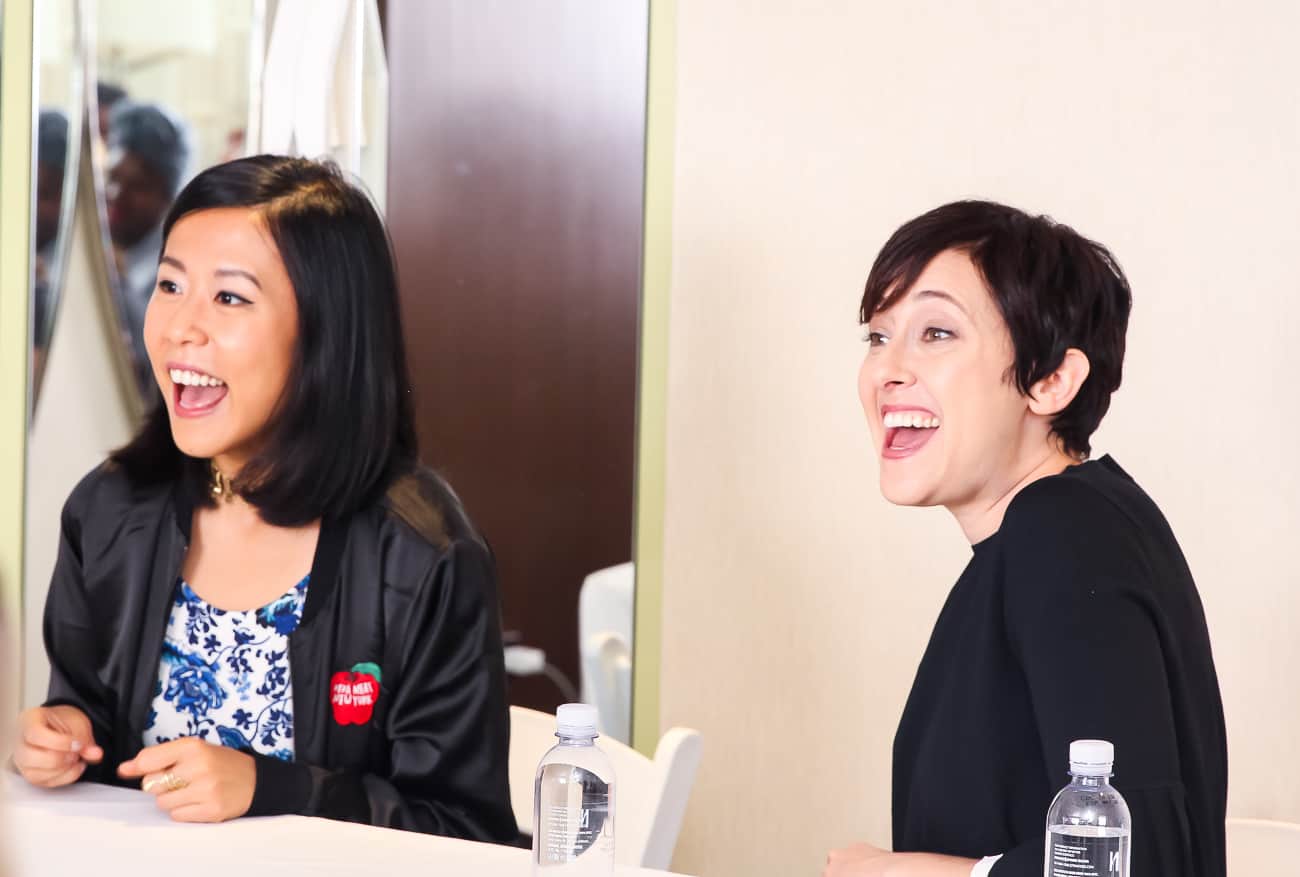 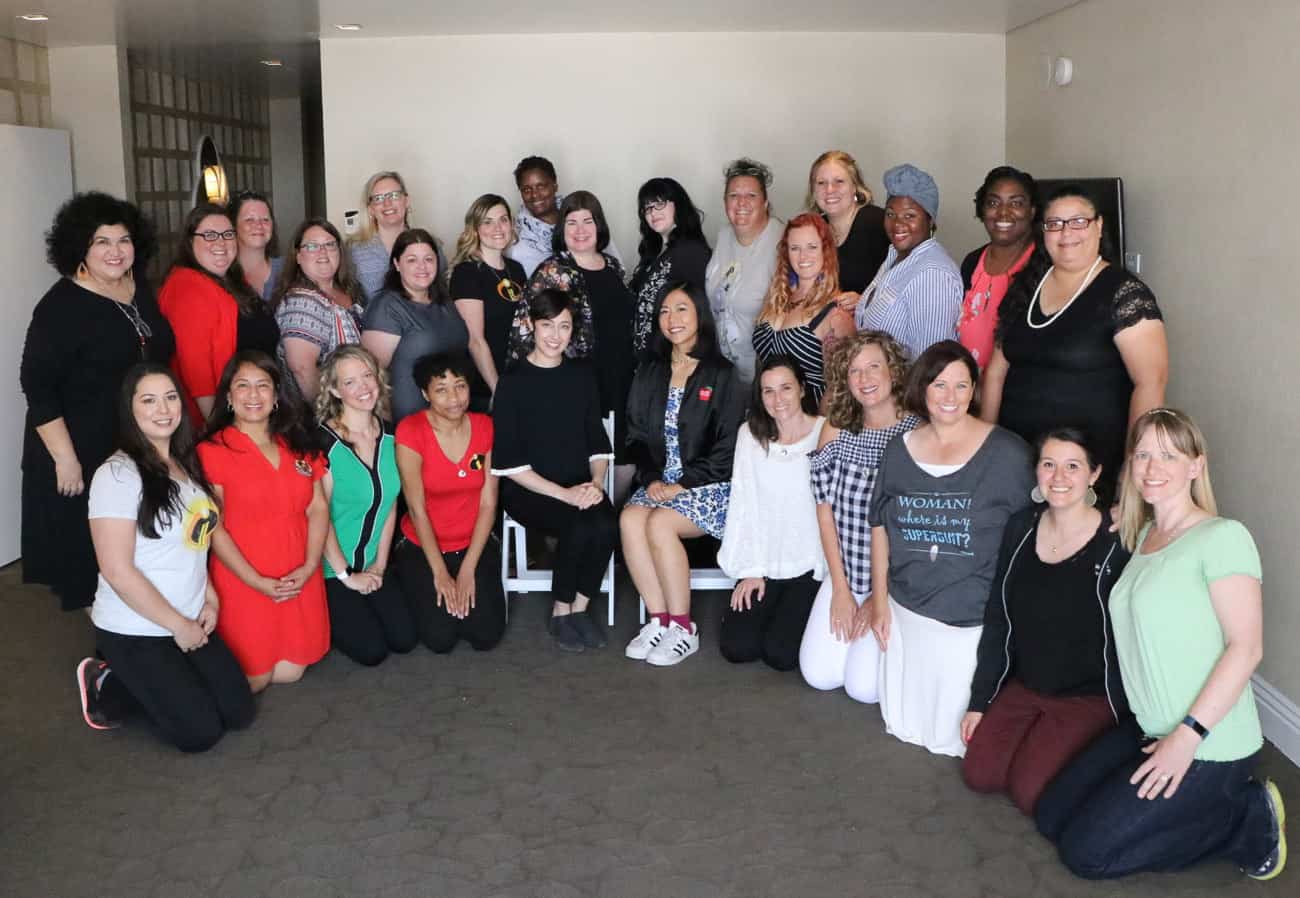 Incredibles 2 with Bao opens in theaters everywhere on June 15th. See the movie details and get tickets for your local theater here!