↑
Home » Entertainment » Who is Rose in Star Wars? My Exclusive Interview with Kelly Marie Tran

Who is Rose in Star Wars? 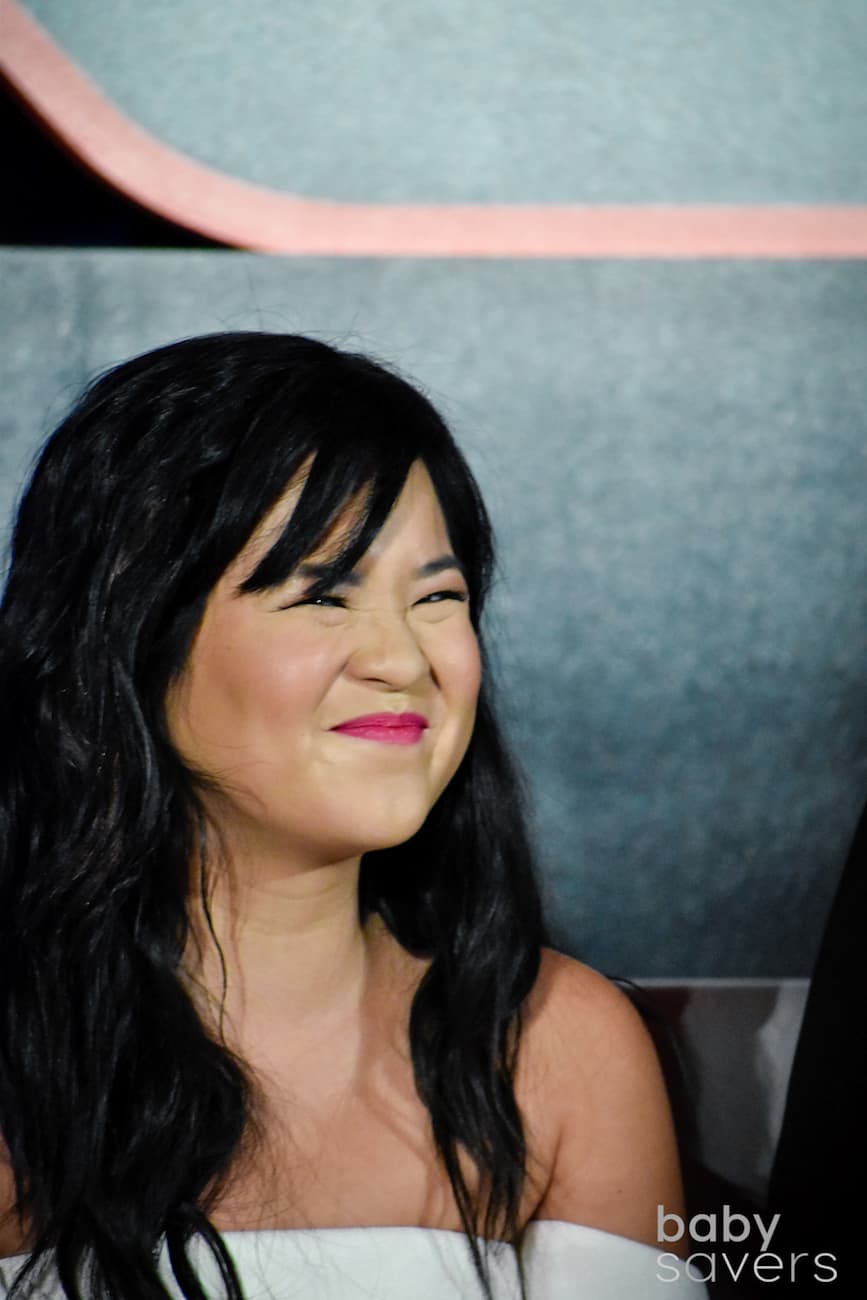 Who is Rose in Star Wars: The Last Jedi? Remember this name: Kelly Marie Tran.

Kelly Marie Tran had a lot to say about who Rose is and how she relates to her character, but Rose makes her debut in Star Wars: The Last Jedi, so she’s all new to the Star Wars movies! 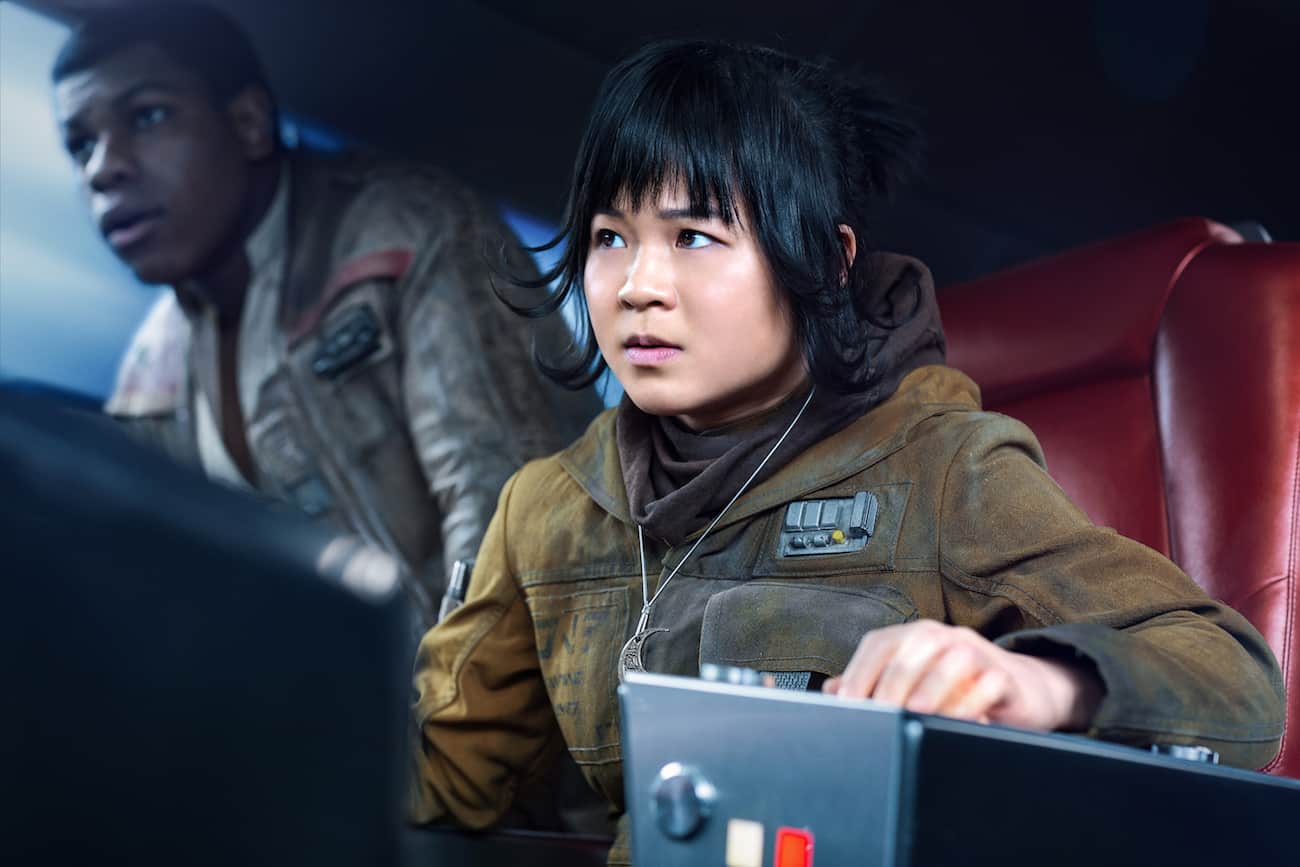 About Rose in Star Wars: The Last Jedi

Rose Tico is a maintenance worker serving in the Resistance. She’s had a lifelong hatred of the First Order. Rose’s sister (possibly her twin sister), Paige, was a fighter for the Resistance.

The Strong Star Wars Female Characters in The Last Jedi

My theme of strong Star Wars female characters in Star Wars: The Last Jedi continues! It started with my interview with Laura Dern, who spoke of her role as Vice Admiral Holdo. The next strong female of Star Wars that I sat down with was Gwendoline Christie, to talk about Captain Phasma unmasked.

Now Kelly Marie Tran completes the trifecta by discussing her part as Rose in Star Wars: The Last Jedi!

My Interview with Kelly Marie Tran 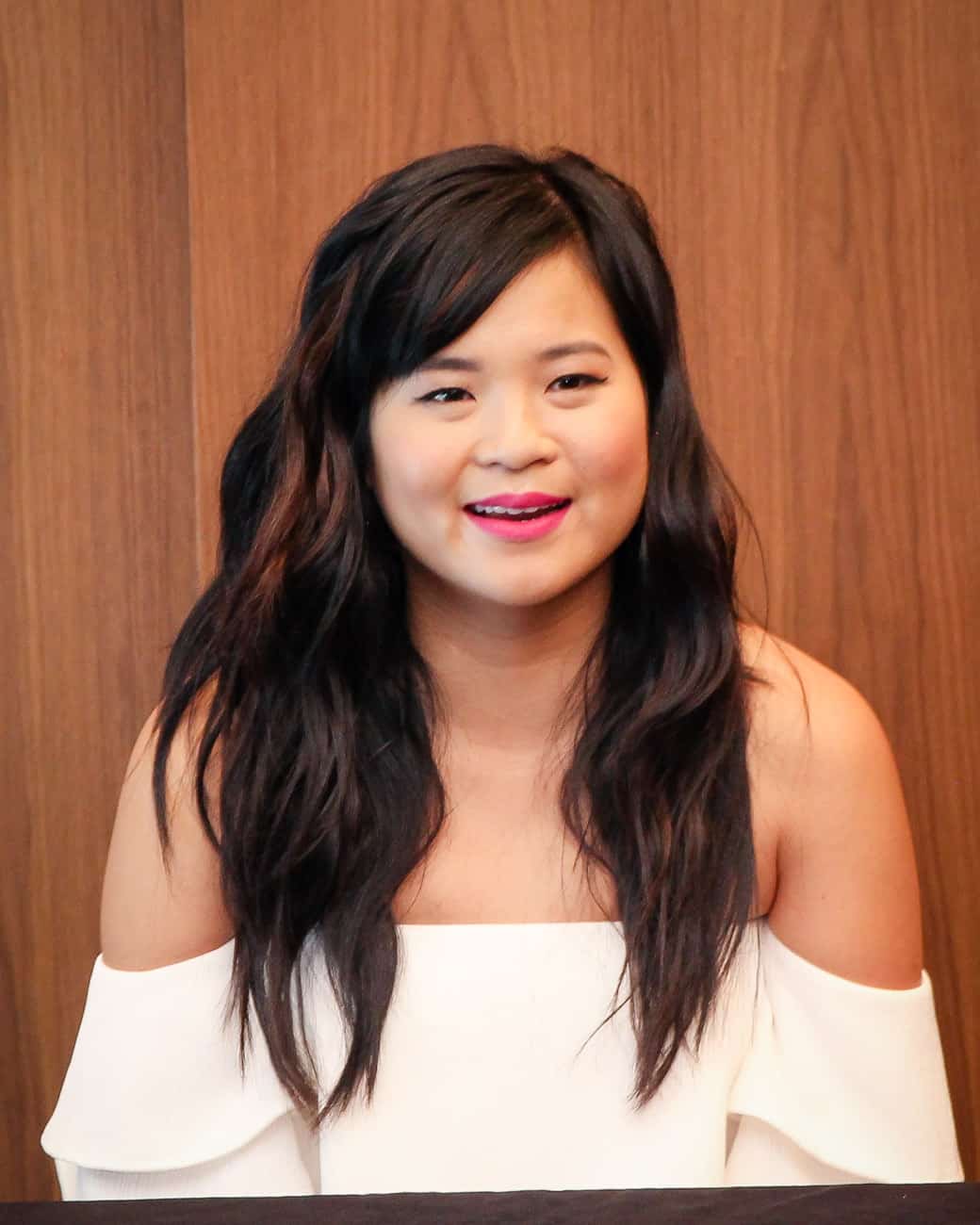 Q: Can you tell us how you got into Star Wars: The Last Jedi?

Kelly Marie Tran (KMT): The first audition I had was back in 2015.  I had been pursuing acting for about seven years. It took me years to just get a commercial agent, much less a theatrical agent. Then it took me years to begin auditioning for commercials. Then into TV. I could never get into the room for movies.

[Star Wars: The Last Jedi] was probably one of the two or three movie auditions I was ever allowed to  go to.

So that first audition came in and I remember thinking, “This is crazy. There’s no way I’m going to get this.” So that feeling kind of traveled with me from the beginning to the very end. And it served me, because I was so sure in my mind and in my heart that I wasn’t going to get it, that I was free to be present and have fun.

It was a five month audition process, and it included a surprise chemistry read with John Boyega. The final test was in London in full hair and makeup.

There was this set that they had built. It felt like we were shooting the movie. The whole time, and still now, I’m just still trying to be present in all of it. 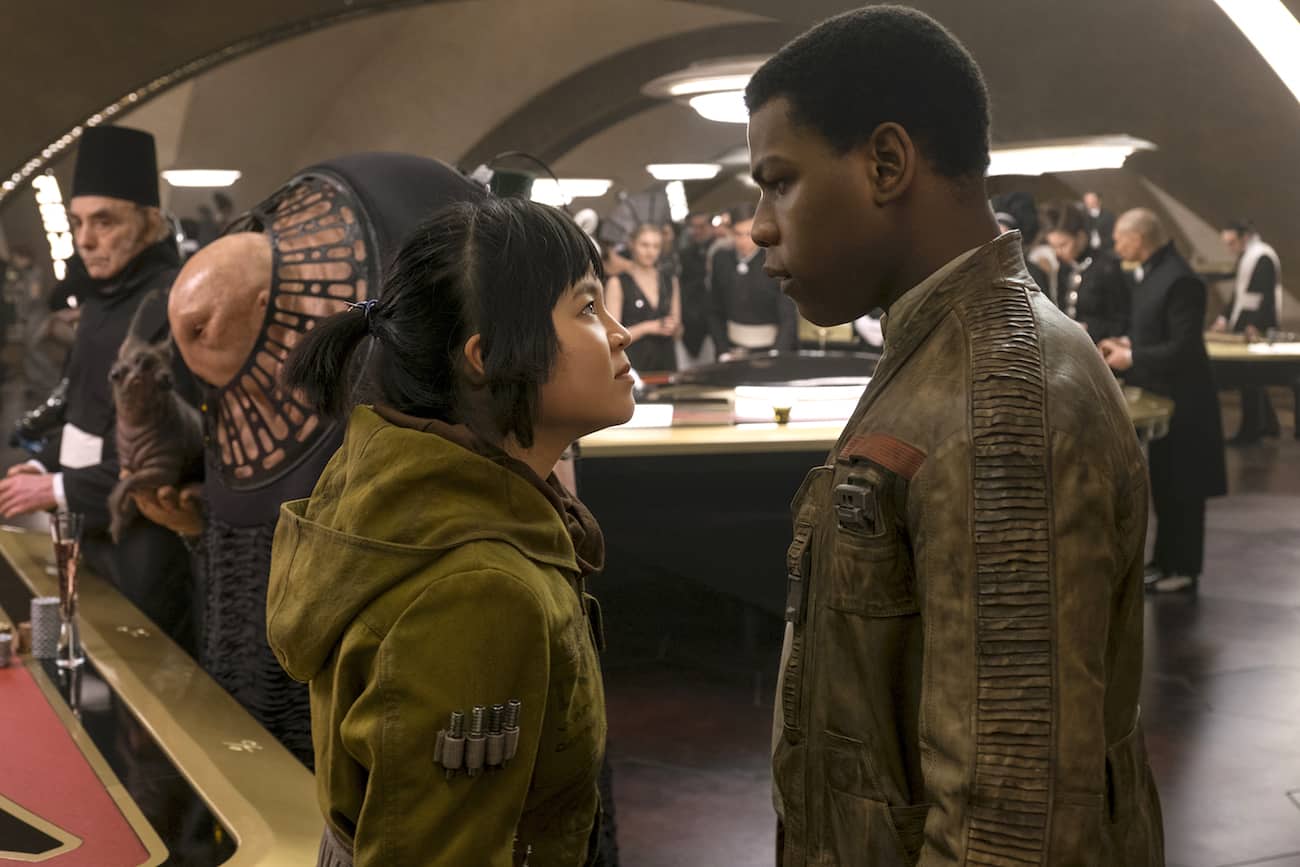 .Q: How did you find out you got the part [Rose in Star Wars: The Last Jedi]?

KMT: I was still working my day job. I was working at an office, as an assistant. I got this call from my agent saying that Rian wanted to meet with me before Thanksgiving.

I remember saying I had to go to lunch then driving over to this meeting. I just felt like almost how I feel now. I have goose bumps. I was thinking, either he’s going to be like, “you have it” or “look, nice try kid. I just wanted to say good job”

I was so nervous going to this meeting. I remember sitting in the waiting room and picking up the book that was on the table and being like,” I’m going to casually read this book. I’m so casual!” When Rian got there we had a little small talk, then he said, “I want to offer you this role.” 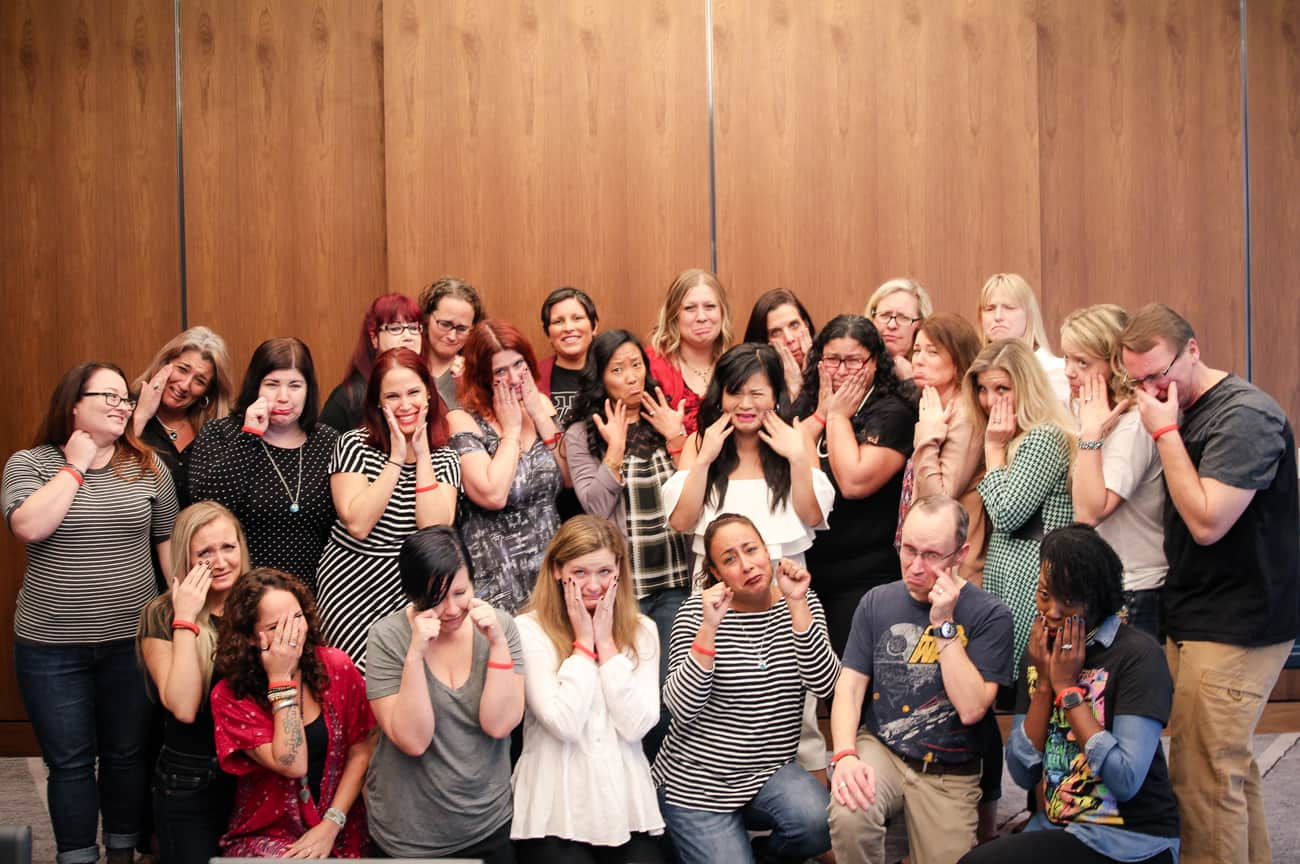 Note: Kelly Marie Tran was so funny about crying during her interview – she decided she wanted a group picture of all of us pretending to cry!

I had imagined this moment for so long and I thought that I would be so ecstatic and I’d be jumping up and down.

But when it happened, I was so scared. I was just silent for a full minute. I was just staring at the floor. I was treading water for so long, I never thought I would get to the end…of the pond. Or the lake. Whatever….I don’t know, I just made that up now. 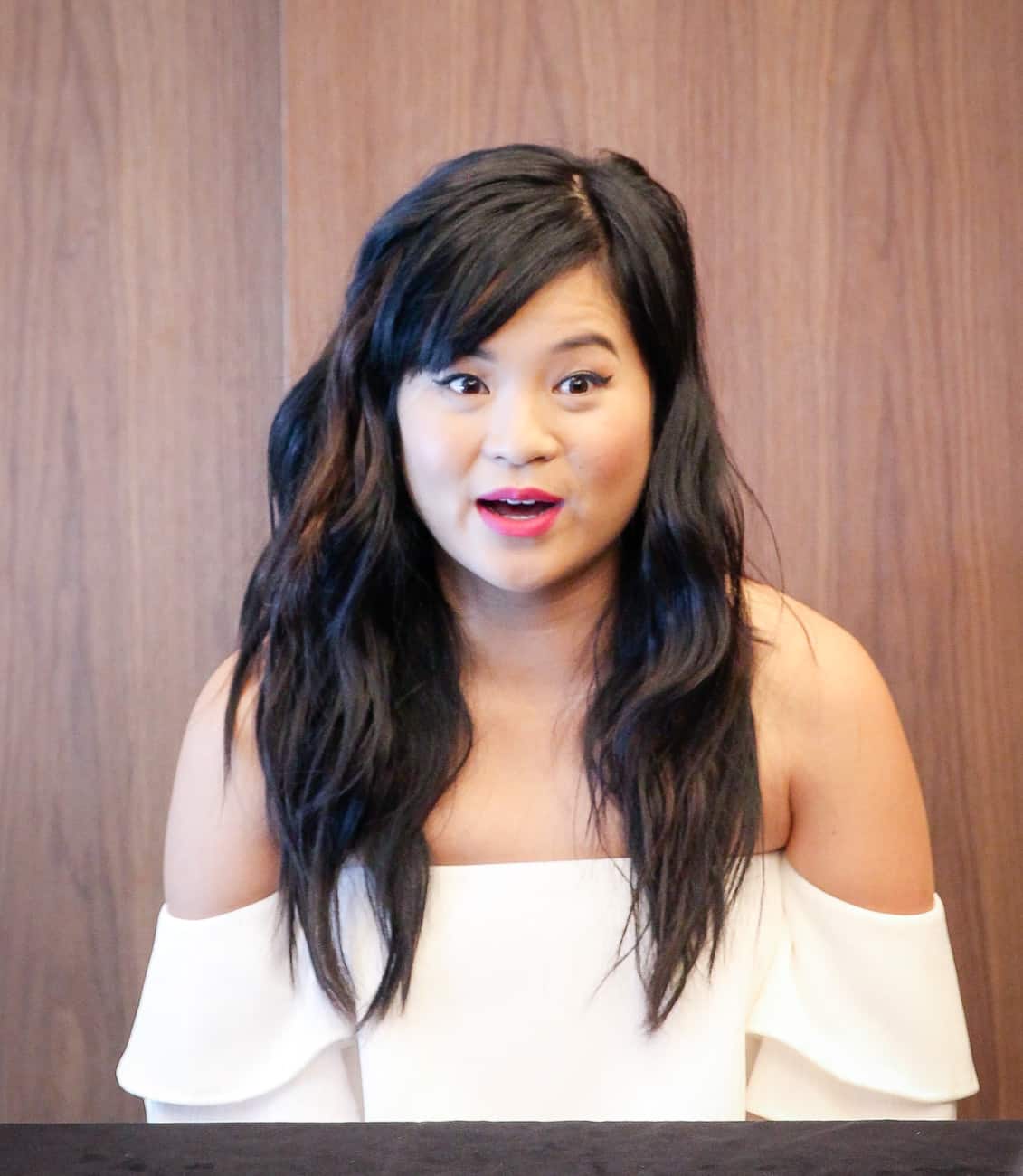 There was four months of not being able to tell anyone, and just lying for so long to my parents and my family. I had to tell them I was living in Canada. That I was working on this small movie that no one had ever heard of.

When I finally got to set and got  to London, it felt like home. It felt like I was in someone’s backyard making a small movie with my friends, which says a lot more about everyone else involved than about me.

Everyone was so welcoming and open. I don’t know that, as an actor, you could have a more fulfilling experience than that.

Q: What did Star Wars mean to you growing up? 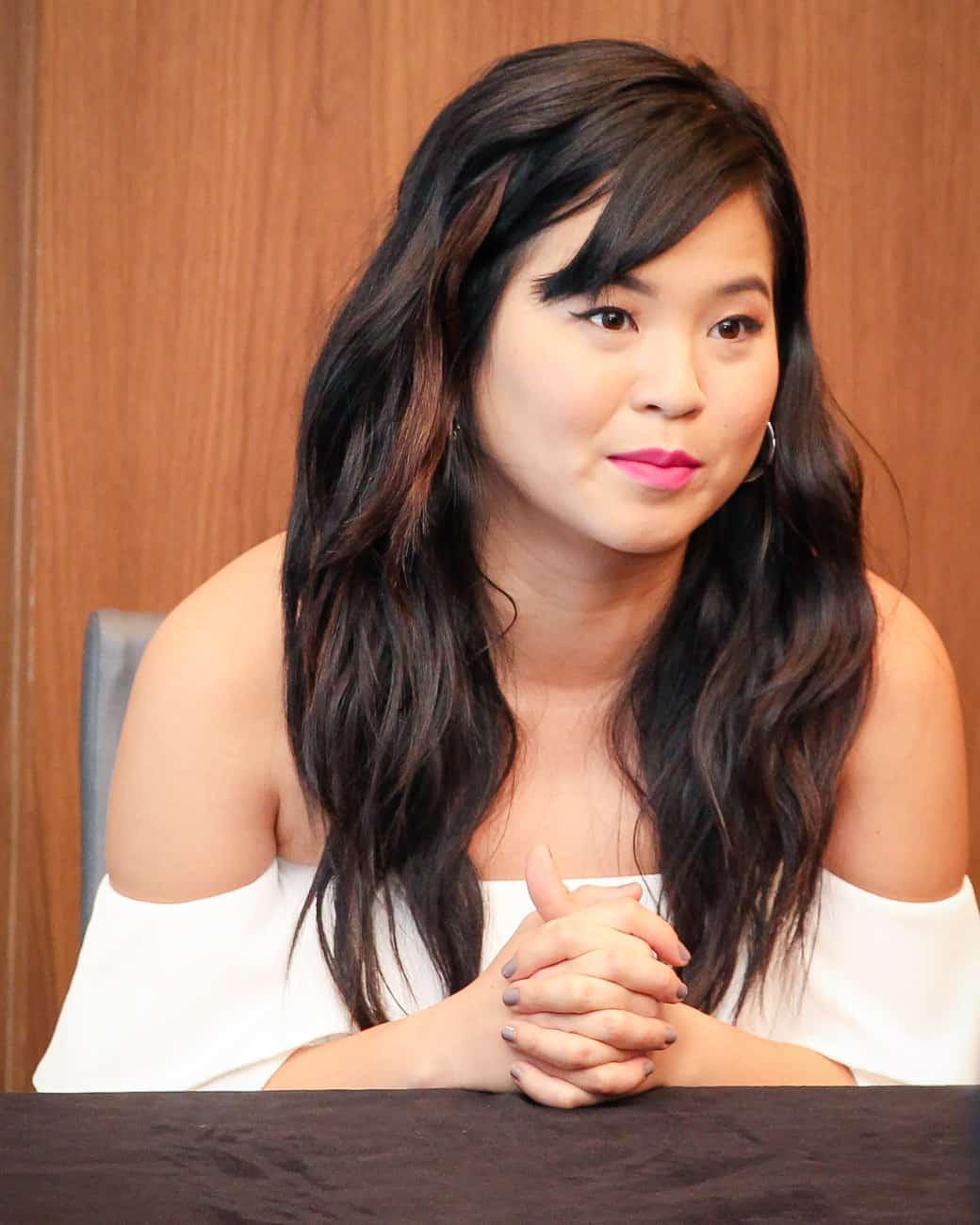 KMT: That’s a funny question because Star Wars is such a family-oriented thing. So a lot of parents have seen the original movies. When the first Star Wars came out, my parents were still living in a different country.

My parents are both Vietnamese refugees. They aren’t from this world at all. They don’t work in entertainement. This is a very weird thing that they’re having a hard time understanding. Gorwing up, I didn’t watch Star Wars. I was aware of it, but I never saw it.

Obviously, after I got the part I watched all the movies. There’s nothing but amazement, especially those original films.

You watch them now and they’re still incredible with how innovative they were at the time and the idea that they were so groundbreaking when they first came out. I do think they continue to do this with Star Wars: The Last Jedi. In some ways this film will also be groundbreaking. 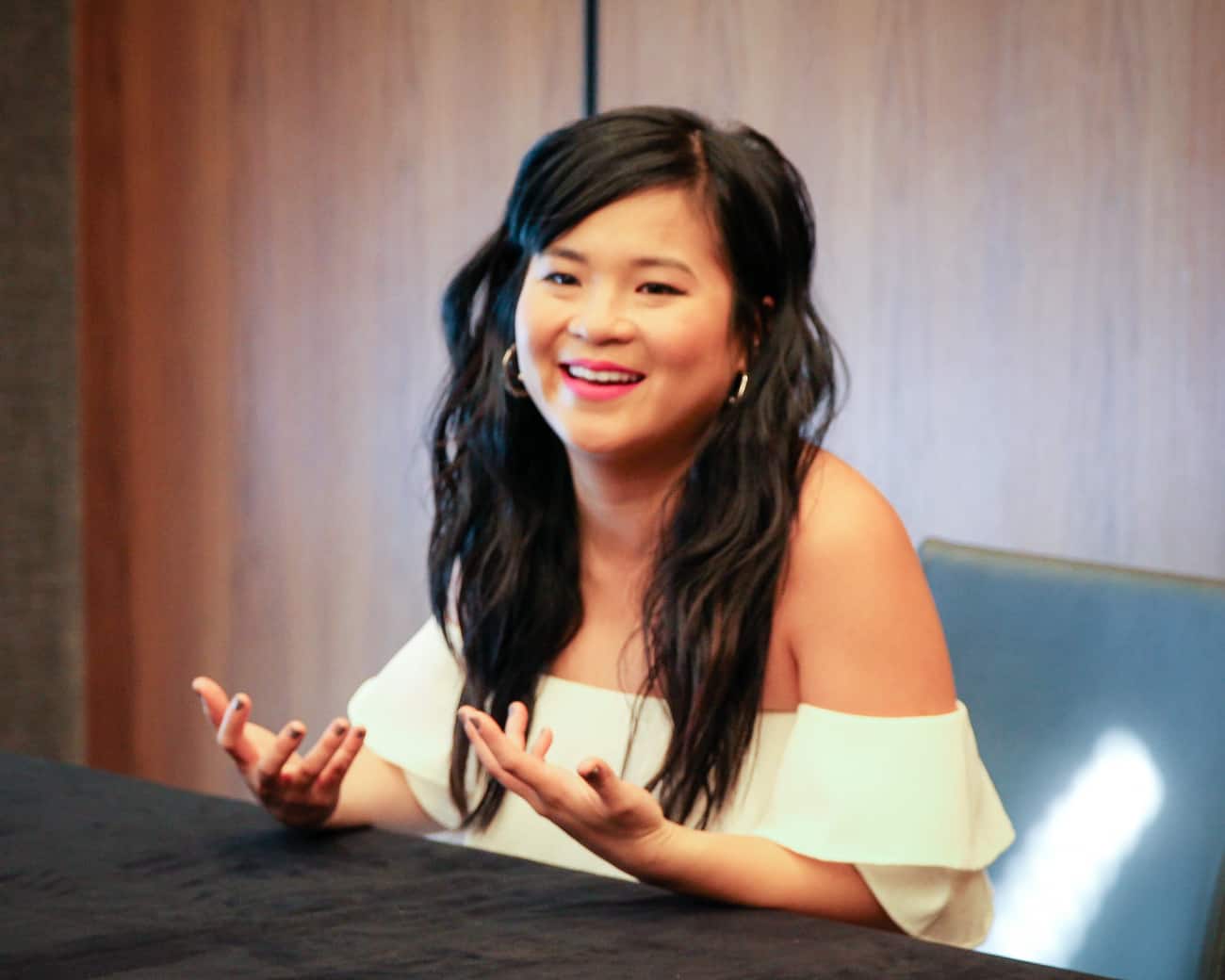 Q: The character of Rose has done so much for diversity in film and in changing our perspective of Star Wars. What are you hoping that Rose’s character accomplishes once we actually see her in action — both for yourself and for future generations who now have a strong female Asian role model to look up to?

KMT: I’ve thought about that a lot. It feels like such an honor but also a lot of pressure.

I know what it’s like to grow up in a world where I never saw myself in anything.

I would like to hope that in some way, this character is such an example of an every woman, essentially. She doesn’t necessarily belong in this world. She works in maintenance. She works behind pipes all day. She’s not a star pilot. She doesn’t have magical powers. She’s not a princess.

You don’t necessarily see these people in stories, but they’re so crucial to the idea of the Resistance. Poe couldn’t go fight the First Order without the people fixing the ships! so of course they’re important. But no one ever really sees them or talks about them. They’re always just running around in the background.

If this character of Rose could mean anything, I really hope that she portrays the idea that, even if you’re someone who’s kind of in the background, who’s not in the spotlight, who’s not a princess, you can still make a difference. You can still rise up to any challenge that comes to you. 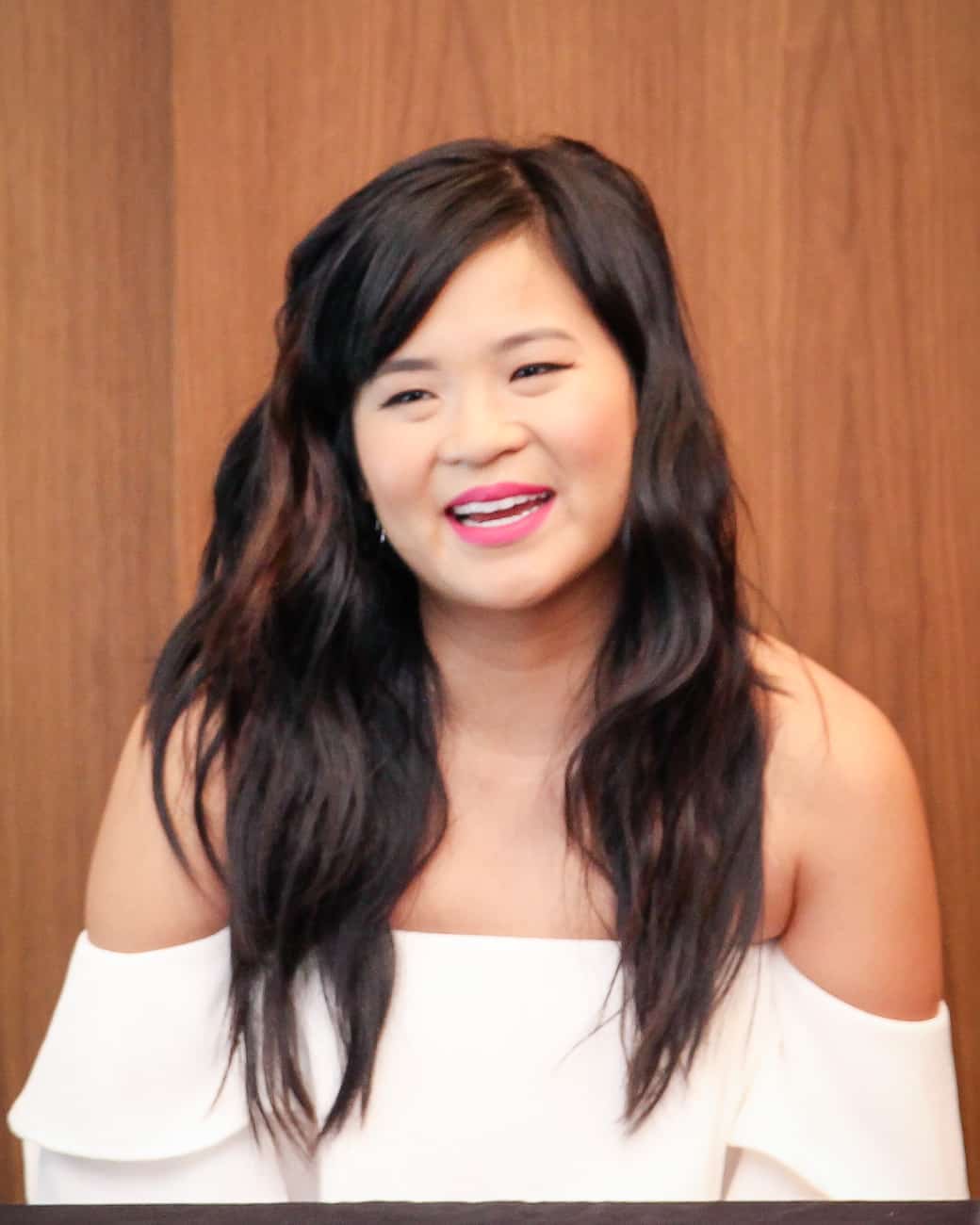 Q: How has this role changed you?

KMT: I think that I don’t know how to date anymore. I think I had trouble dating before, but now…I’ve never in my life had question every person that wanted to date me in the future. That sounds like such an actor problem…

I always knew what I wanted. I always believed that, if you work hard and you’re a good person, you will get where you want to go. But experiencing it is a whole different thing.

[The role of Rose in Star Wars: The Last Jedi], it’s really changed the way I look at the world.

I really want people to know that if your parents are not in this world, if you have no connection to it, if it seems impossible, if you’re working four jobs to support it, if you can’t pay off your student loan bill, if you’re worried about all that stuff and you still want to do this…if you put your head down, you just ignore the parties and ignore all the people who don’t believe in you…I just think it’s possible, and I always have.

Q: Do you think Rose is envious of not being out there?

Rose has an older sister, named Paige, who is in the forefront of the action. She’s a gunner and she finds herself alongside Poe, who’s the hotshot pilot in the Resistance.

I think that there was probably always a part of her that secretly wanted to be part of that. But I also think she’s really good at what she does. She knows it, which I think is hard for people to realize.

We live in this world where everyone wants whatever’s flashy. Everyone wants to be in the front. I think Rose is one of those people that really does understand that those people who are out there on the forefront of the action can’t be there without everyone else behind them.

You’d be fighting the First Order and your ship would just fall apart. I think this is a metaphor for real life. A lot of the things I’m doing now…do you think I look like this in real life? No way! There are a lot of people who get me looking like this.

I’m new to the movie world, and a lot of times actors get so much credit for something that so many other people are working on. All the people that created the sets and the creatures, the stunt team teaching us how to fight.

Everyone who’s out there in the forefront is in this shiny place that everyone gets to see. And there are hundreds of people behind them that put them there. I love that Rose is kind of the metaphor for that, and I think she understand that. 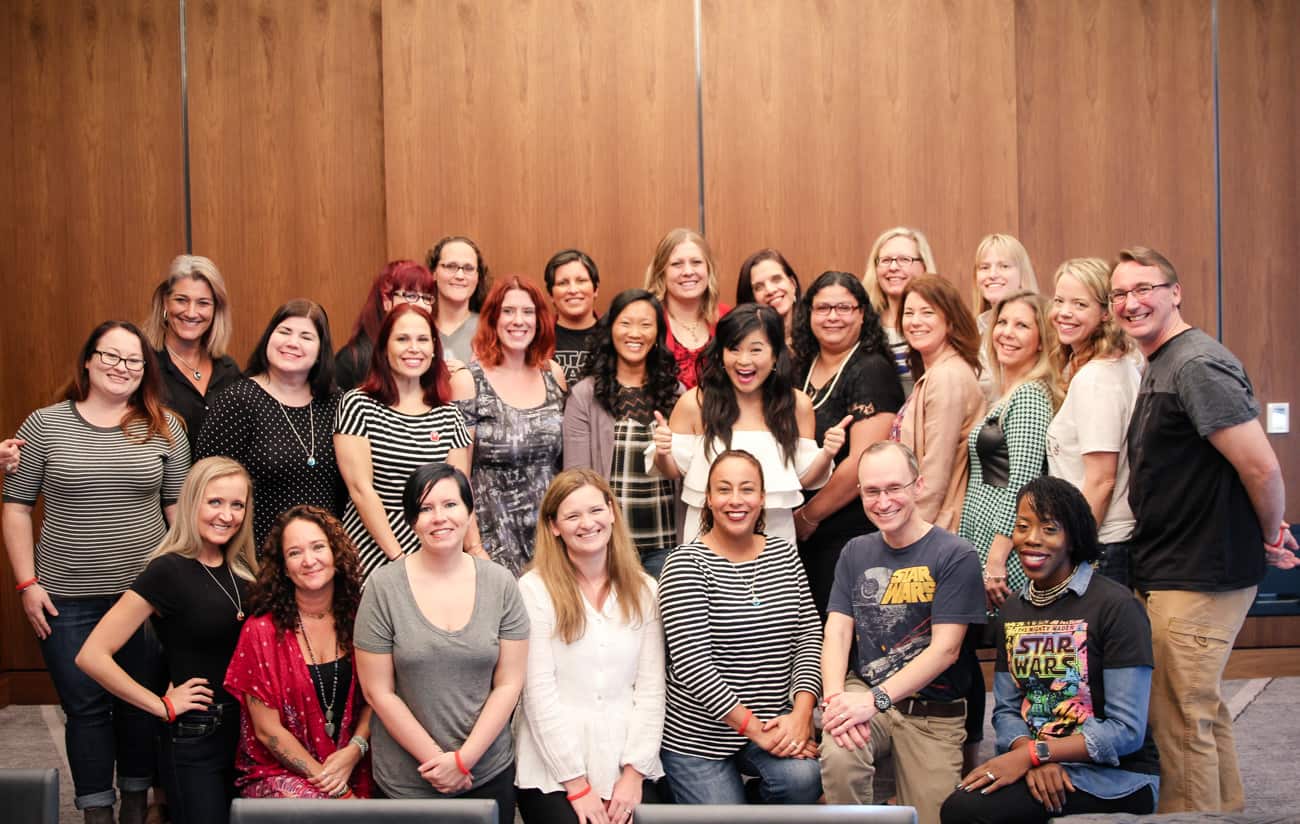 Star Wars: The Last Jedi is in theaters everywhere now. Get your tickets today!