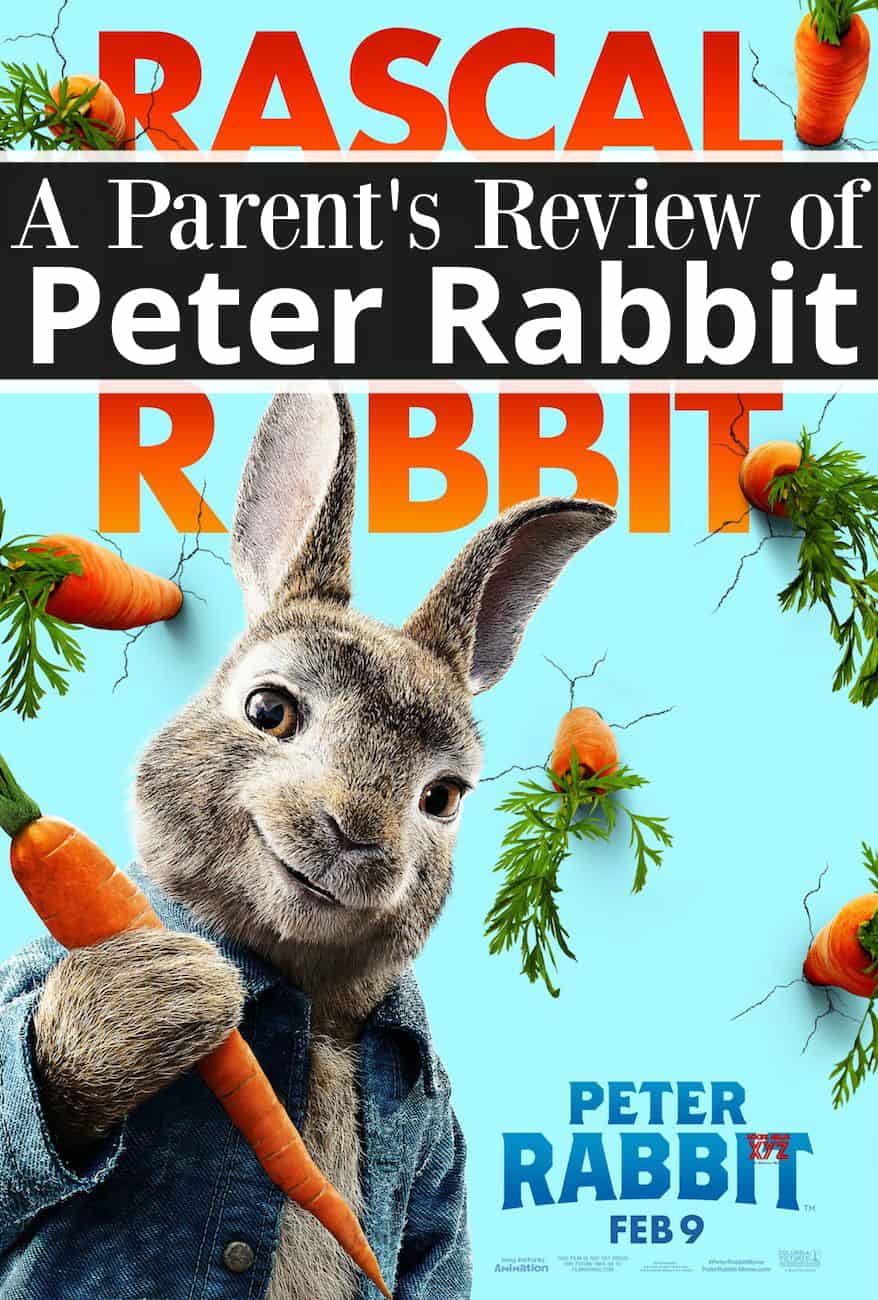 Let’s start out this parents review of Peter Rabbit by addressing the questions most readers want to know:

Is Peter Rabbit ok for kids?

Should I take my kids to see Peter Rabbit?

But I promise-I can be decisive in these parent’s reviews. (Read my Toy Story 4 Parent Guide for an example.) I can definitely say yes – Peter Rabbit is ok for kids and you should take your kids to see Peter Rabbit!

Peter Rabbit is a live-action/CGI animated comedy based on the original works written by Beatrix Potter.

Here’s my general position on entertainment where my kids are concerned: I’m a mom of two kids, ages 8 and 9. I’ve said it before: We love entertainment and pop culture, but both my husband and I are somewhat strict in what our kids are allowed to watch. If there’s even a question about something being too violent or too scary for my kids they’re just not allowed to watch it.

It’s not because I want to deprive them of anything. It’s just that I believe there’s plenty of content out there that’s 100% appropriate for their ages, and they have a lifetime ahead of them to watch programming that’s better for older kids and adults.

Why is Peter Rabbit rated PG?

According to the MPAA, Peter Rabbit is rated PG for “some rude humor and action.” That’s very much par for the course in kids and family movies right now.

Check out the ratings on other family movies released in the last year:

Ratings are objective, but that short list should give you a feel for why Peter Rabbit is rated PG.

What this mom liked about Peter Rabbit

I love that the Peter Rabbit movie retains the heart of the original stories.

It’s no secret that I love to read. I always have. I have very fond memories of reading Peter Rabbit and other Beatrix Potter stories with my mom. Those sweet stories stayed with me and I’ve read them with my own children.

Like most children’s books that are turned into movies, the story of Peter Rabbit is fortified quite a bit to make the plot deep enough for a full film.

Even with those embellishments, the Peter Rabbit Movie stays very true to the original story, with other Beatrix Potter stories woven in.

The original story of Peter Rabbit getting chased through the garden by Mr. McGregor is all there, including the memorable portion of losing his father’s blue coat.

We’re also introduced to lots of other special characters straight out of other Beatrix Potter books. It’s so fun and sweet to see Mrs. Tiggy-Winkle, Benjamin Bunny and Mr. Jeremy Fisher, the frog.

I love the animation in Peter Rabbit

I enjoyed Peter Rabbit from start, and I loved getting to know all the adorable characters. About 30 minutes into the movie it just struck me: I couldn’t believe how real the animated animals looked.

As it turns out, the director of Peter Rabbit said that Animal Logic, the production company that did the animation, had the best animators he’d ever seen do the animation in Peter Rabbit. The level of detail, along with the movements and expressions are wildly realistic, and it’s amazing to see.

As it turns out, my kids both really did think  the rabbits in Peter Rabbit were real, so did my friend’s daughter. That’s a huge nod to the animators for the movie!

I loved the focus on family

Peter Rabbit has a clear theme of forgiveness, which I love to see in children’s movies. It also teaches some great lessons about honesty and teamwork.

But the heart of the story is really about love and family, and the theme comes across in a few different forms.

The relationships between Peter Rabbit, Flopsy, Mopsy, Cottontail and Benjamin are complex enough to make you think about them, but also easy to understand and easy for kids to relate to their own families.

Honestly, there’s nothing in particular I didn’t like about the movie. There’s a lot of cheesy slapstick humor-which isn’t my favorite. But this is a movie for kids, and the kids laughing so hard throughout the movie I couldn’t help but giggle at it, too.

[Spoilers ahead] There were a few points in the movie where I had concerns for the feelings of the children in the movie theater:

About the allergy to blackberries in Peter Rabbit:

Mr. McGregor’s nephew is the “new” Mr. McGregor. He’s an adult and he’s allergic to blackberries. In one scene the rabbits throw blackberries into his mouth knowing about his allergy.

I understand that this might make people with severe allergies uncomfortable. At the same time, we need to remember that this is undeniably fiction with animated characters.

In short, the entire movie is far from realistic. I don’t have any concerns that this scene would have any sort of impact on how real people deal with allergens and allergies.

Yes – the movie is cute and sweet and there are a ton of funny moments. I thoroughly enjoyed it, and so did my kids!