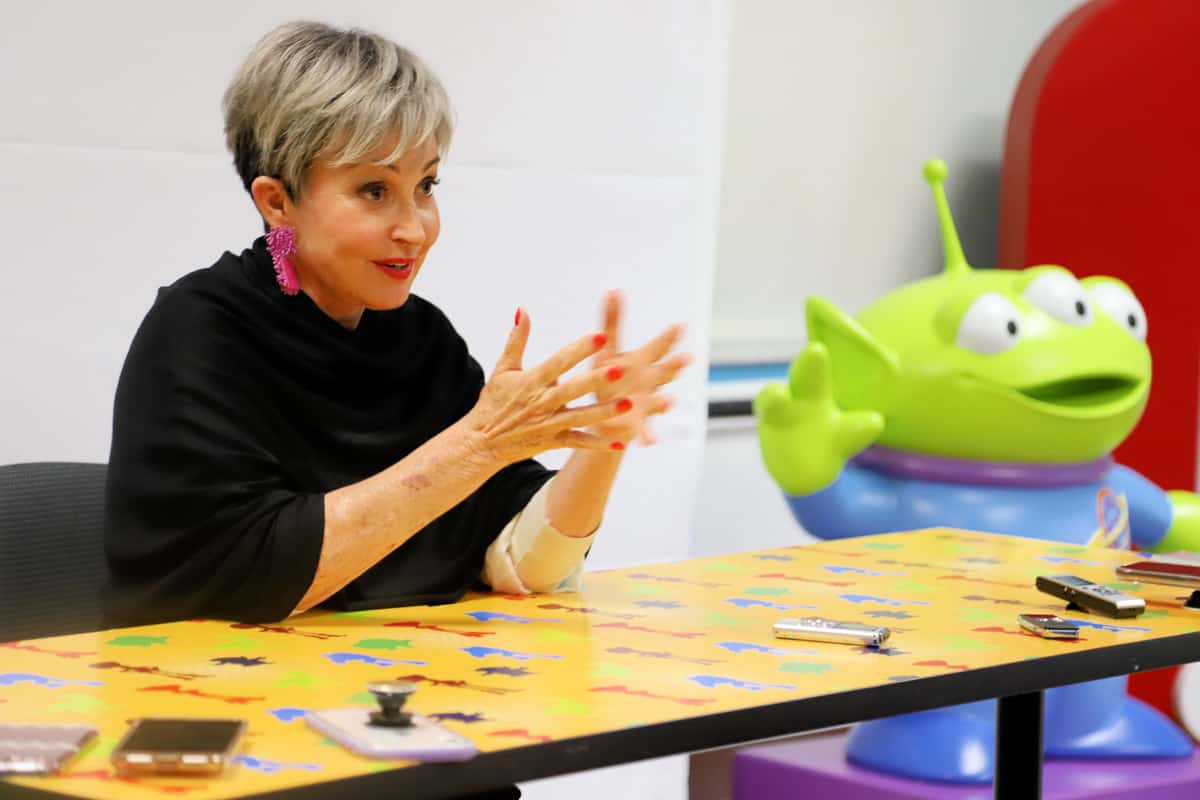 Earlier this month I experienced a Toy Story fan’s dream: my family and I traveled from Minnesota to Disney World for the Toy Story 4 press event!

We had some great Toy Story moments as a family, including screening the new movie (Read my parent review to see: Is Toy Story 4 Kid Friendly?), riding unlimited rides at Disney’s Toy Story Land and generally falling in love with Forky, our favorite new character from Toy Story 4!

One of the highlights of the event was a special blogger-only interview with Annie Potts. I love small interviews with celebrities. Don’t get me wrong; I think that magical things can happen at press conferences when celebrities and filmmakers are in the spotlight together. But I really, really love the intimacy and honesty that comes out when a single person is interviewed by a smaller group.

To be honest, I didn’t know very much about Annie Potts outside of her role as Bo Peep in the Toy Story franchise. Now I know that she is so sweet and so lovely! It was a true joy to talk to her!

1. How Annie Potts realized that Bo Peep was going to be big in Toy Story 4 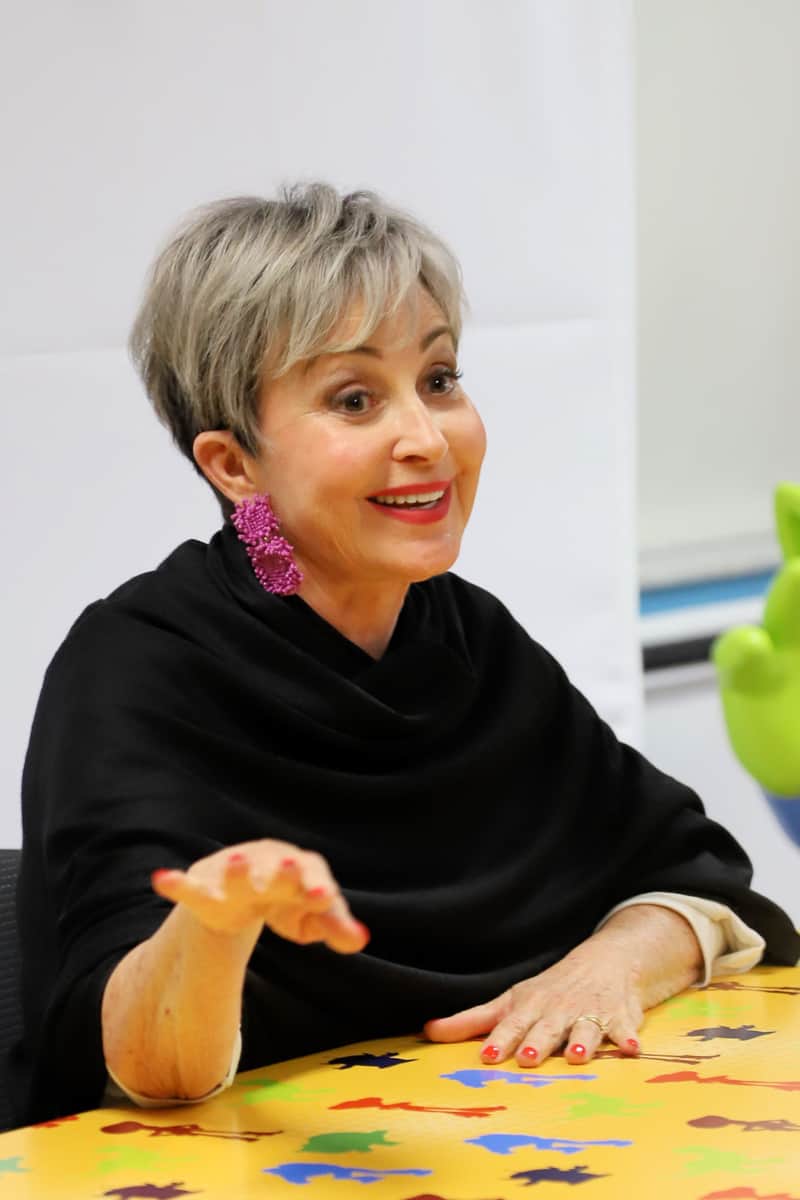 We never saw the script when making Toy Story 4. It was like going on a scavenger hunt with a guide and the story was a revelation each time I came back in to record. It wasn’t until six months ago that I started to understand how big the role was, because of the piecemeal fashion in which we had built it.

Sometimes I would forget I’d been working on Toy Story 4 for over four years, so I wasn’t sure what to expect when I saw it.

I was sort of knocked out when I saw how they created Bo Peep. There was a whole team of people called Team Bo, and they were in charge of defining everything about her. How she might move her eyes. What she would think. Everything is so carefully considered. It would be nice to take complete credit for who Bo Peep is, but I’m so thrilled to just have her voice.

2. On Bo Peep being a strong, independent woman 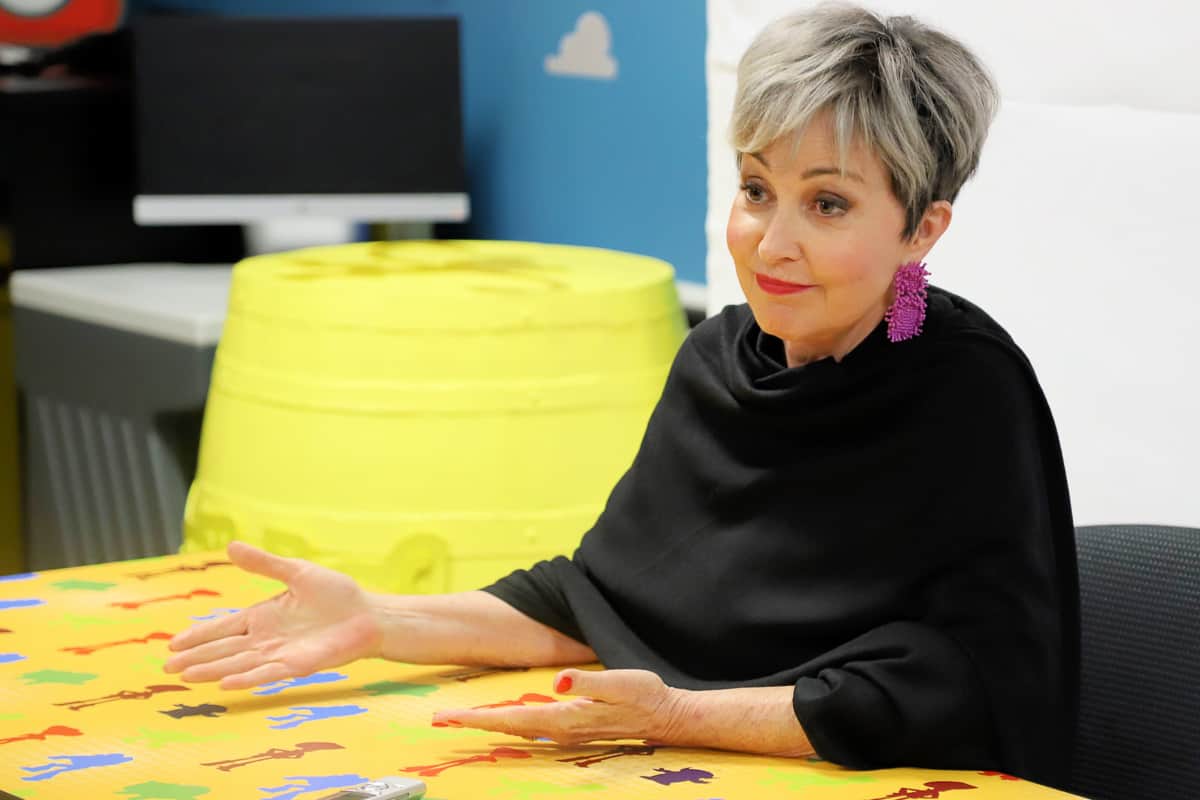 I have the privilege of presenting those qualities that are so admirable and inspiring. Bo Peep has been knocked around quite a bit and she’s just kept on going in a cheerful, inventive way. She’s figured out a way to make it happen.

I think it’s fantastic for young women and boys to see this. It’s like THIS is what a woman is, and, to young girls, this is what a woman can be. I’m just thrilled to voice those qualities. It’s such a privilege to give positive messages, especially to children.

3. What Annie Potts did when she got the call for Toy Story

When Pixar calls, you say yes.

Even 25 years ago, our brains were just getting used to what computer images could look like. Toy Story blew it all to smithereens, the idea of how beautiful it could be. Of course, as they go on, they get more and more sophisticated.

I thought her new look was great. Bo had had some limitations before, being a lamp. Once they got her off the base, all bets were off.

The filmmakers at Pixar did all these tests, seeing what porceline looked like when it broke, and filming it, then trying to recreate that with their computer magic.

5. What she thinks Bo Peeps superpowers are in Toy Story 4

Bo is very sassy — she ripped off her skirt to use it as a cape! Even though Toy Story 4 isn’t a superhero movie, her superpowers are her heart and her courage, and I think those are the greatest superpowers of all.

6. On how it feels to see little girls wearing Bo Peep costumes

At an earlier screening there was a little girl who had on a Bo Peep outfit. It’s thrilling. I can hardly wait until Halloween to see all the little girls, because I think she’s very relatable. Bo Peep is feminine but she’s nobody’s fool. I think little girls are empowered by that and I think the world is moving that way. Bo gives it a nice shove in that direction.

7. On how she still fears failure, 25 years after making Toy Story 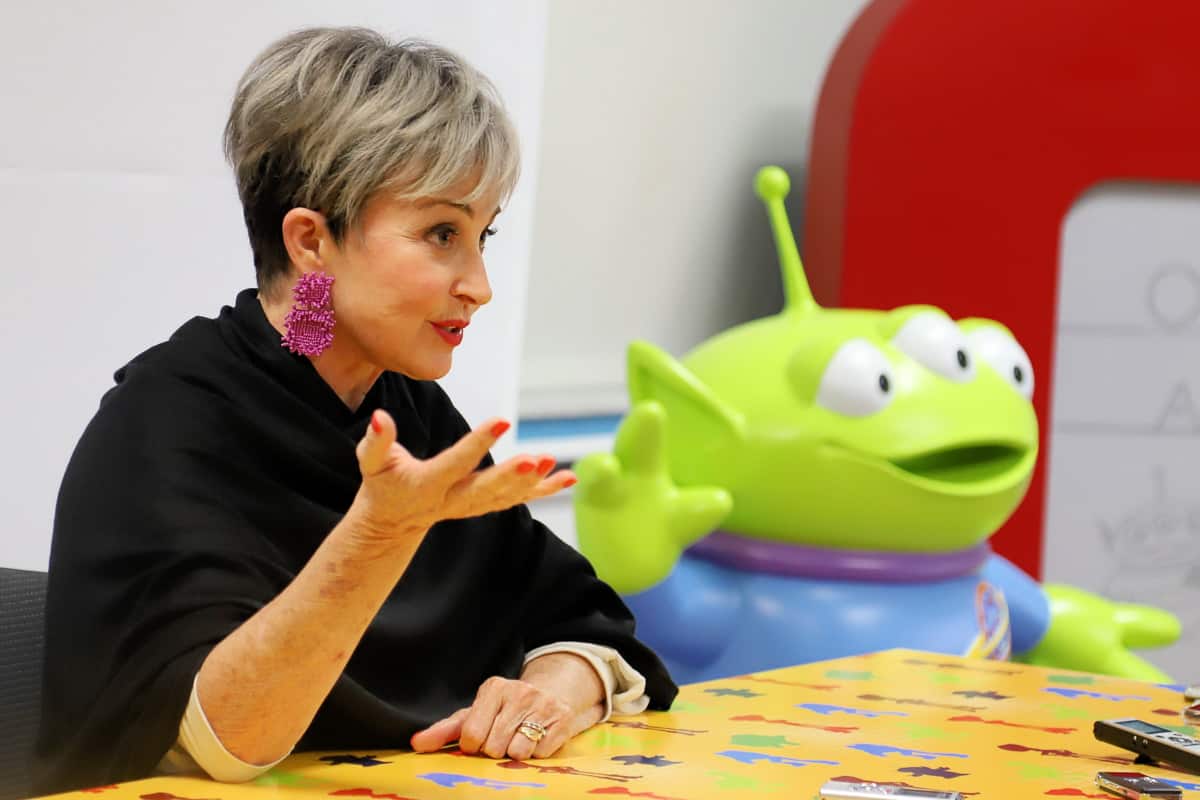 As I became more aware of the size and possibilities of Bo’s role in Toy Story 4, I was like, ‘Oh. I had no idea! It’s too much!’

All the way on the drive to the studio to screen the film, I was convinced…I just prepared myself…’You’re going to be the first actor that completely screwed up a Pixar movie. Just accept it now before you go in.

So I watched Toy Story 4 through my fingers, but I’m pretty sure I didn’t screw it up. I think Pixar is too good to let that happen, but it’s a big responsibility.

They’re the most wonderful people to work for. They are as smart and kind and inventive as their films would suggest that they are. It’s always nice. It’s the best working environment you can imagine.

9. How she feels about Bo Peep’s friendship with Giggles McDimples 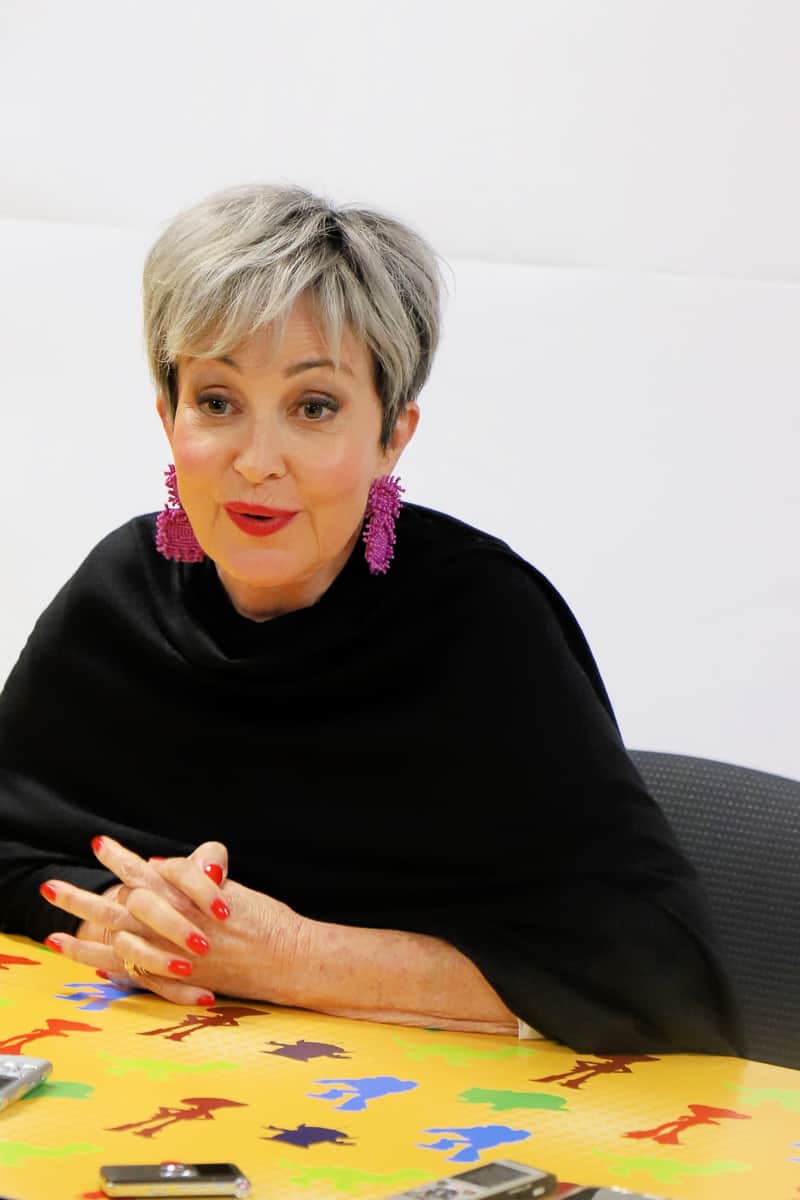 They’re what all our best friends do for us. The one you tell your troubles to. It’s a metaphor for your bestie who’s always right there to hear the best and the worst of what’s going on with you.

10. On how life has changed since the first Toy Story movie was made

25 years ago, I had a little one and I was about to give birth at the premiere of Toy Story. I clock everything by my children, so I was saying hello to a lot of new people at the time.

Now my children are grownups and a lot of stuff has happened with them always in the foreground. My oldest son is now married and I think they’ll be starting a family soon. It makes me feel so good to think that, in the not too distant future, my granddaughter will maybe be holding a doll who’s string she can pull and my voice will be there with her. 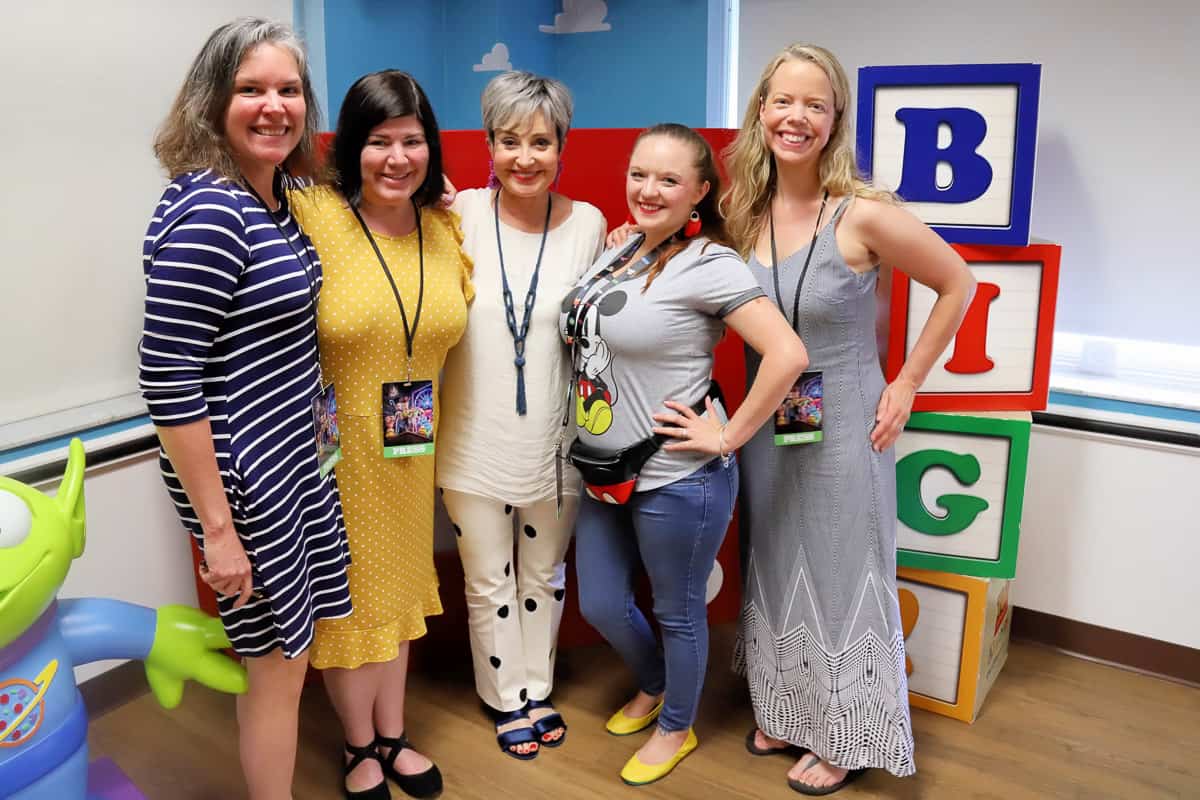 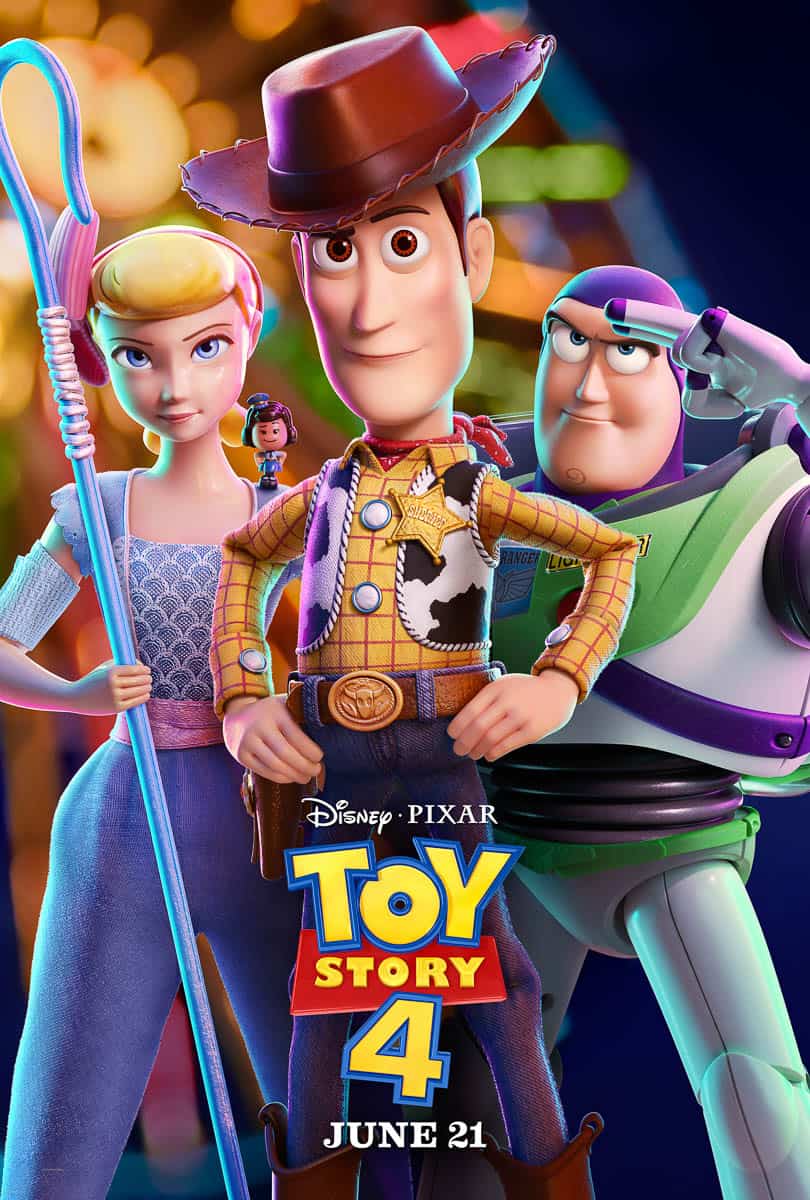